I like to wear suits, but I rarely ever have to. Still, I wear them from time to time anyway. There was a time when I would save them only for special occasions, but I figure if I'm going to load the closets with them then I might as well use them. The good thing is, because they're non-compulsory for me I have total freedom to wear them with "incorrect" accoutrement. 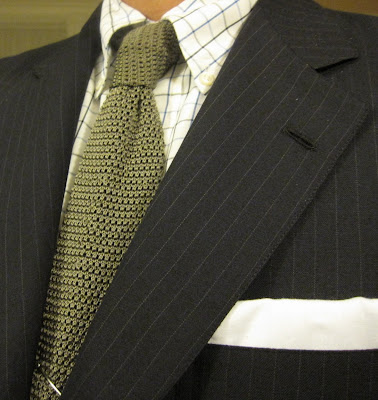 Navy pinstripes= business formal. Knit ties= dress casual. Do I care? Not a bit. As I've said before, a willful disregard for the rules can mean the difference between style and blind conformity.

So too these grey socks and brown shoes with navy pinstripes: 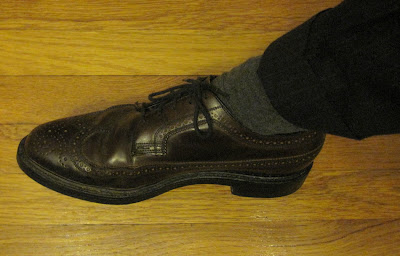 So wrong it's right. A man is "supposed" to wear black shoes and navy socks with a navy suit. The hell with that. The grey socks pick up the grey knit tie, further making it "work".

As for the small details, a man's jewelry should be discreet. It certainly shouldn't be a safety pin: 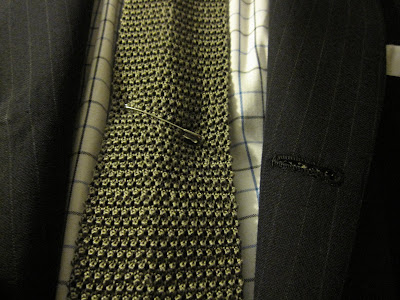 Yes, a real safety pin, not a tie tack made to look like one. Straight out of the sewing box, through the tie and into the placket of the shirt. Call it a nod to my youthful escapades in punk rock, call it sprezzatura, call it whatever you want. Why would I do such a thing? Because I can.

Guys are always complaining that suits are restrictive and uncomfortable, and many people believe the suit to be the ultimate symbol of an oppressive establishment. That's only true if you believe it. Wearing a suit, especially if you don't have to, can allow a man to set his personality free. Sure, you can set yourself apart from the crowd with funny haircuts and tattoos...I've done that before. But in a world full of grown-ups walking the streets in children's clothes and pyjamas, out-dressing every guy in the room gets 'em every time.

Some of us guys in suits still listen to X and Bad Brains ...on vinyl.

p.s. I stole the safety pin idea from an Italian guy named Beppe. The man's a real bad- a*s.

Beppe Modenese rules! An old italian man that dresses in amazing blue or gray pinstripes and shirts with blue stripes. Knit ties or solids. Red socks all the time and brown shoes. He is the man. If you haven't seen it yet go through old posts in the The Sartorialist. It's worth the look.

Agreed on Beppe. He is one of the coolest. However, his safety pin is a tie pin. its about size more than anything else as a regular safety pin is just too small. Unless, of course, you are wearing a thom browne knit tie, which I trust you aren't.

Are you out of your mind? You'll have to post a photo of the whole, because the parts look ridiculous.

It's a thin line between casually having tons of style and a knowledge and disregard for the rules and simply trying too hard. This one looks like trying too hard for a blog post.

"But in a world full of grown-ups walking the streets in children's clothes and pyjamas, out-dressing every guy in the room gets 'em every time."

Once again, you've hit the nail squarely on the head, my friend.

Nice. This helps me with ways to wear suits during the work week when they'd be considered overkill.

It also helps me harness my 25% Italian which is being challenged lately by my 25% English/Welsh. (Don't know a thing about Icelandic or German men's style.)

What about seersucker with a knit tie and a safety pin? Maybe with sockless loafers instead of bucks?

That Beppe fellow is good guy to borrow from. Looking good as always Giuseppe.

I've always preferred brown shoes with navy and charcoal suits. I always think navy with black looks like you were trying to match, but couldn't or are an off-duty policeman.

I think half my own posts have been on this exact same topic! I recognised the Beppe Modenese homage right off, which deserves a similar level of notoriety as Agnelli's watch-over-cuff signature

Of it's ridiculous, I'll own that much. But aren't you being a bit harsh?

Don't you remember me pushing it this hard back in high school, befores blogs even existed?

The suits nice but much better with a Silver grey tie on white shirt and the socks =No way.you're not breaking the rules you are just ruining a look.

That, sir, is the real red hot Tabasco. Keep fighting the good fight. Even John Doe appeared in a suit every once in a while. Sure with a string tie, but you know... a suit.