At the gracious invitation of fellow Bostonian and sometimes commenter Yankee-Whisky-Papa, I was afforded the opportunity to don the full black tie get up and enjoy cocktails at a private Back Bay social club. What a time!

Good thing I didn't sell this monkey suit after all. It fit me perfectly, no alterations. Vintage shantung silk, $12.99, how could I resist? Now that I've worn it once, I'd say that it's paid for itself, so the rest is just frosting from here on out. 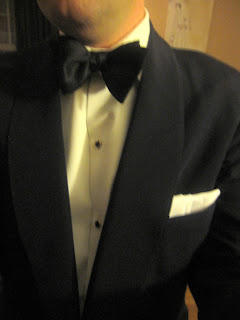 Besides being midnight blue, not black, the shawl collar is not faced in satin, thought there is a satin stripe down the side of the trousers. A small touch, but a nice one. I bought that silk satin formal bow tie when I was 16 years old, working at Simon's. Classic things are never out of style. 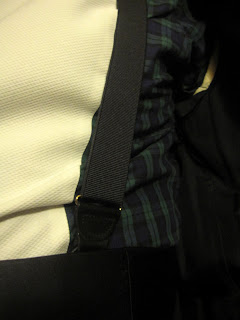 The first of the evenings slightly bent rules: a formal shirt in Black Watch tartan, with a bib, cuffs and (detachable!) collar in gleaming white pique, the generous gift of Tin Tin. Black formal braces borrowed from dear old Dad, and a $7.oo black satin cummerbund I picked up mere hours before at Keezer's. It's nice to know there's still a place where a fella can run out and grab such a thing as a cummerbund in a pinch. 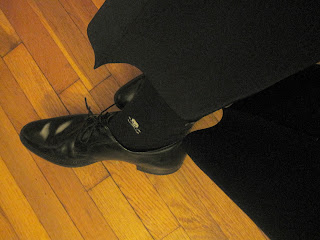 And if it's a good thing I didn't sell the suit, it's an even better thing none of you bought those shoes from me. Vintage 1960s Italian made patent leather lace ups. Looks like I'll be keeping them after all. Skull and bones socks from J.Crew, the second of the evenings bent rules. I think it works, and anyway I bought these socks to go with this tux in the first place, remember? 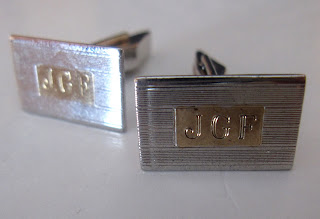 Sterling silver and gold cuff links, sort of like mini engine turned belt buckles, generous gift of my Godmother on the occasion of my Catholic Confirmation, also at the tender age of 16. They started me young. 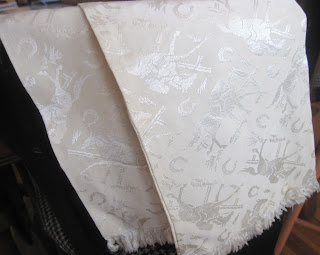 A vintage 1940s Kentucky Derby themed cream silk scarf, generous gift of a good friend for my birthday some years ago. Come to think of it, this may have been the first time I've worn it.

Topped with a Chesterfield coat from the Andover Shop ($9.99),  and finished with black leather gloves, a rolled black umbrella, because of the light snow, and (gasp!) a Black Watch driving cap, the third and most egregiously bent rule of the evening. While I'm well aware of the fact that wearing a driving cap with black tie is a sartorial faux pas worthy of capital punishment, I gotta say I liked it. I felt that in conjunction with the slightly off beat nature of the socks and the shirt, it actually tied everything together in its way. Besides, it was freezing outside, no way I was going out bareheaded. Perhaps some of you think this looks a little silly, but nothing looks sillier than being dressed inappropriately for the weather.

Lest you think I was the only one not strictly adhering to an arcane code of dress, here are some of the better examples (unfortunately no photos, my battery was dead. Take my word for it):

-A nice young fellow named A**** eschewed the black trousers in favor of a pair in red, navy and green tartan on a black ground. Excellent. Further points gained for choosing a Barbour jacket as outerwear.

-My gracious host YWP finished his tux with a pair of socks in purple and black horizontal stripes, $2.00 at Target.

-Best of the evening was a very old gent in a very old tux and black bow, worn with a rumpled white oxford button down with a frayed collar! I know how it sounds, but this old dude had the style to pull it off, mostly because he really didn't care. I want to be like that when I'm old.

Also of note was the very low number of pre-tied bows I saw, even on the young guys. Apparently, rich people still teach their sons how to tie a bow tie, generally speaking. Better still, I only saw one four in hand tie the whole night.

Once more, for good measure and vanity: 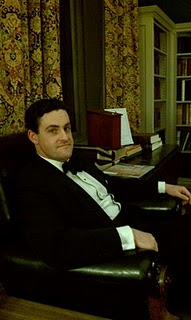 The tux "in the wild", amongst the leather furniture, wood panelling and brocade drapes of  an old 19th century Brahmin social club.

Don't get rid of that rig! It looks fantastic and you look great in it!

Apropos of old man, too-old-to-be-bothered style: I saw a gentleman at the hamburger shack this weekend, in the old guy weekend costume of sweater/oxford/khakis, who was wearing his v-neck backwards. Those Neopolitans got nothin' on him.

Well, of course, wearing that shirt called for that cap...anyone could see that

Terrific cufflinks, and something "family" to boot

Dang that looked like fun. Don't get rid of the black tie - looked great!

I hope you played nice with the other boys and get a return invite.

Oh! I forgot to add that all of my Black Tie kit ( including an ivory DJ )has either been e-bay or trifted.

Also had my first real occasion to wear black tie over the weekend. The Ancient Universities Society (Cambridge, Oxford, Edinburgh, Trinity) had a soiree at the Cambridge Boat Club. I wear straight traditional with the tux (midnight blue shawl, grosgrain shawl), white tux shirt with MOP studs instead of black. Two rules I broke were polished black shell longings instead of pumps or patents, and my school's repp stripe bow instead of a black one. I thought that latter would be a faux pas but there were at least a dozen alumni doing it, and they were old,rich and Scottish to boot.

Your kit looks great, Joe. Hang onto it. Black tie sure makes a man feel like a king.

Oh, that's the worst-looking hat I ever saw. When you buy a hat like this, I bet you get a free bowl of soup, huh? Oh, but it looks good on you, though."

Wonderful! Looks like you had a good time, and you looked great. I have a cream scarf-for-tuxedo I inherited from my grandfather, and can't wait to give it a spin. (It was horribly stained--OxiClean to the rescue!)

Of course, I'd have to get the tux first. Almost got one earlier this month, a nice silk number with unfaced shawl lapels, but alas! It was made for someone about 3 or 4 inches taller than I, and no amount of tailoring would ever make it look right.

My black tie rig is out there, waiting for me to find it....

Tintin,
It must be the hair.

Fogey,
Don't bie till you find the right one.

Anon.,
Backhanded sarcastic compliments are a sign of weakness.

Looks great! I have recently been putting together a proper 'grown up' set of clothes and lurking here for advice. Well done.

I offer this as observation not criticism. I think the first rule bent was the wearing of a jacket in a summer fabric in the winter.
That said I think some times with vintage, we can say we want certain features but the items we end up with, surprise, delight and fit our personalities better then we could ever hope. I am glad to see your getting out and getting some use out of those fine old threads.

Lookin' good!!
I wish someone would invite me to a black tie event. O the gowns I would love to don.

I think Anonymous was quoting Rodney Dangerfield in Caddyshack.

Either way, you looked sharp and the club chair photo was a great way to wrap things up.

Much better no hat than a newspaper boy cap with black tie. Might as well wear sneakers with it as well.

Freezing cold (15 farenheit) and snowing. Headgear was not optional.

Besides, strict adherance to arcane rules is boring. If we all did it, then what wuld anyone talk about?

The overall effect is laudable and the shirt, studs and tie truly beautiful, but the trousers billow, I'm afraid. Nothing your alterations tailor will not be able to correct, though.

I have my doubts about the hat in this situation. I have noticed a lack of "adult" hats on this blog, the stuff of felt and feathers if you will. I understand that the hipster set was ruining fedoras for a while and that you probably don't own a bowler. What is up with only the most casual of hats?

Awesome rig, I must say. Makes me want to finally get mine altered.

Also, I wouldn't count the BW shirt as a faux pas as it really can't be seen unless you open your coat rather wide.

And the cap with tux is daring. I like it!

To correct a few commenters, the trousers billowed neither while standing or sitting, and the hat was appropos of deep winter. As I was there, I am expert witness to report that the total fit was superb and without error. Perhaps GT possessed a doubt concerning his assembly, but he would be the only one. Observers noted only an attentively presented gentleman fully at ease and exceedingly well appointed. I was there.

I too had occasion to wear a tuxedo this weekend for my sister's wedding. But it was BROWN. Even though we grew up on a farm there's just no excuse for such a thing.

I think the plaid ivy cap dresses down the outfit too much. Love the blackwatch shirt though. Now tell us what you had to eat/drink/smoke? Any old scotch? Did you meet anyone of notoriety?

I must regretfully refer you to the fourth photo from the top and suggest you have your eyes tested.

Those pants fit me better than most I have. They do have deep pleats, which is unusual for me, I grant you, but they herdly billow. As for the picture you refer to, that's a 9 inch leg opening, not unlike most of my pants.

YWP saw me walking around in those pants. I suspect he has a better idea of their fit than you do.

Looks great. I was at a black tie event over the weekend. I was fortunate in that I was able to wear my grandfather's pants and vest from his 1920s tails. Luckily, I found a jacket that matched. I love the tails, but I sure don't have an occasion to wear them.

Very well done, but I agree that the cap isn't right.

What club was it?