It's been such a long time since I've been excited about the purchase of what might be called a "punk"record by a band I've only just discovered that when the occasion does arise, it's momentous. All the more so when the record is so good it makes half the "punk" records I still respect sit down and shut up for a minute. Such is the case with Death.﻿ 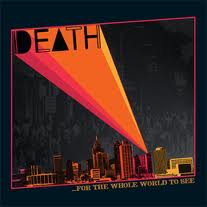 A real rock nerd, record collectors delight if ever their was one. The story goes something like this: Death was a Detroit based band in the early 1970s, who recorded a record that faded into obscurity and never saw print. In 2009, it was un-earthed and finally released (thanks, Drag City).It's full blast power trio proto-punk from before punk existed, with just enough riff rock elements and a hint of psychedelia to keep it infinitely cooler than most punk, which tends to be the exclusive province of suburban white kids who are pissed about....God knows what those kids are pissed about. I never did figure that part out. 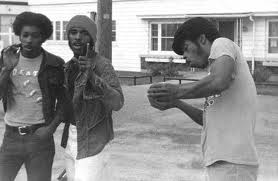 ﻿Best of all, the band is three black brothers (as in, the same family), David, Dannis and Bobby Hackney. They were an R&B band, until they saw Alice Cooper. Their mother bought them their instruments, but made them promise to practice at least three hours a day. Audiences in Detroit's black clubs couldn't figure them out, and neither could the white kids. The session was produced by Jim Vitti, late of Parliament Funkadelic fame, by sheer chance. Clive Davis of Columbia Records wanted to sign them, if only they would change their name. A band called "Death" was still a bit much by 1974 standards. David Hackney famously told Clive Davis to go to hell (GTH, you know, like the pants...). David died in 2000. Dannis and Bobby live on a farm in Vermont where they run a recording studio, host punk shows in the barn, and play in a reggae/hippie/jam band, which I would normally disdain, except when these guys do it, I can't help but be filled with respect. Available on CD or as an MP3, if you don't care how music should sound. If you do, it's on vinyl, and it comes running out of the wood speakers to beat the sh*t out of you, and leave you smiling at that.
The list of reasons to devote yourself to this long gone band are endless. Get it, because I said so. You won't be disappointed.
Posted by Giuseppe at 8:43 PM

Wow...that was really fricken' cool. Never heard of these guys before. Thanks.
-TSG

So great to see some love for DEATH from one of my favorite bloggers. I saw the reformed group with Bobbie Duncan played at a music festival here in Kentucky last summer and absolutely killed it. They seemed awestruck by their recent recognition as a great band and genuinely grateful for the opportunity to get up on stage and play almost 40 years later. All fun and all class, those fellas.

I'm sure you know perfectly well what those punk kids were so angery about...Admiral Cod, of course.

YES! YES!! That CD has not left my stereo in months.

See, I knew you were cool

I would like to say that I knew this band way back in the day, but it was this NY Times article that clued me in:
http://www.nytimes.com/2009/03/15/arts/music/15rubi.html

But this blog is cooler than the NY Times

This album slays hard. It's easily one of my favorite reissues in the past five years or so.

If you can't get enough of them, Drag City released Spiritual-Mental-Physical earlier this year, a full album of reel-to-reel demo recordings. It's obviously not as cohesive or finished as the album, but there's some great stuff on it as well.

Good God! I listened to some clips. I'm buying it off the label site right now.

Nice punk rock dad moment. The re-release & story about the band came out more than two years ago and was all that anyone (without little kids) were talking about then. With a 5 y-o, I do the same thing nowadays: "Anyone watch this show, The Wire? It's set in Baltimore. Great show.".

White, Black, Asian, Mexican, anyone in and or from Detroit (proper Detroit), were filled with piss and vinegar in that era. Anger all around. I should know. Punk spoke our anger, like that of the UK kids of that time. Great post G.!

They're pissed about a horribly mundane, characterless existence. I mean, have you ever seen tract housing? How could you not be pissed?

If you want to know why suburban white kids are angry listen to Suicidal Tendency's Institutionalized... the best musical explanation of this phenom ever recorded.

Now for this reggae disdain, we should have a discussion on this.

Reggae (especially dance-hall), and Ska, are as well voices- to-be- heard music. I love both.

It's the "hippie/jam" part, not the reggae, which tends to rub me the wrong way. I likw showers and clean clothes.

Thanks for the tip. I downloaded it yesterday from Amazon. Surprisingly, it was not on eMusic. I must've listed to it a half-dozen times last night.

what, you don't have a tie-dye sport coat to go with madras shorts?
I do agree with you that GTH pants shldnt swap out the "go to" with "smells like".

Just making sure we leave the honorable Robert Nesta and Peter Tosh out of this.

I knew a guy who could not utter the word "hippie(s)" without first saying "dirty." Of course, Tom Wolfe's observations on hippies who had abandoned such "bourgeois hang-ups" as bathing show his epithet as being entirely based in fact:

"At the Haight-Ashbury Free Clinic there were doctors who were treating diseases no living doctor had ever encountered before, diseases that had disappeared so long ago they had never even picked up Latin names, diseases such as the mange, the grunge, the itch, the twitch, the thrush, the scroff, the rot."

This lead to what Wolfe called the hippies' "Great Relearning" about the value of basic hygiene.

Get off your vinyl high horse. I don't want to maintain my music on large, easily damaged discs that degrade with use just so I can avoid a sample rate of any kind.

Drag City offers FLAC downloads for only a $1 more per album.

You either get that, or you don't.

High horse my foot. Music is made physically, and vinyl and it's attendant equipment, exisitng physically, makes it more like real performance.

I won't budge on this one, sorry.

I have records that are 60 years old. How long does and Ipod or computer last?

I think one should use the term African American instead of " black".( if they are American) Just because one might be dark skinned , doesn't mean they prefer to be reconized as "Black" . People from Cuba, say they are Cuban and they are dark-skinned also. Plus from the picture one can see they are "black" Duh :-)

Something to think about..
T. M. Turner