Gratitude, Heartbreak, and Paying It Forward

Gratitude: A few weeks back, our man in the middle, Mr. Midwester, shared this knockout piece with the world at large: 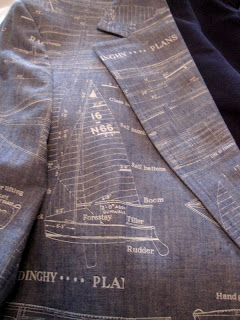 I quite rudely suggested that in some convoluted way the coat was rightfully mine, and much to my surprise, he agreed. A scant few days later, it was on my doorstep. Thank you, Mr. M. 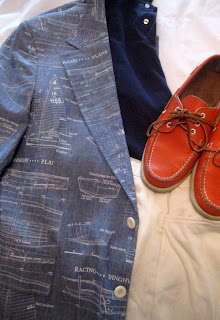 Immediately, I knew this was gonna make one hell of a kit with white pants, a navy tennis shirt, and of course, blaze orange boat shoes. Alas, after a few hours of trying in vain to ignore the truth, heartbreak finally took hold.
Heartbreak: the damn thing is just too long for me. Even expensive alterations won't help. Damn.
Paying It Forward: ﻿The coat is now in the hands of good friend Yankee Whiskey Papa. Besides being a WASP from coastal New England who knows a thing or two about actually sailing boats and the attendant fashions of such sport, he's taller than me. He also has a way of wearing such ridiculous clothing as though it were normal, and succeeding.
I suppose, in the long run, the cosmos is happy with the outcome.
Posted by Giuseppe at 8:00 PM

I remember reading about this jacket on Mr. Midwester, and wishing I could find one like it.

Alas, I am very, very small, and if it didn't fit you, it would never have fitted me.

I'm bummed that this jacket didn't work for you, but glad that it found a good home with YWP, who will no doubt wear it and OWN it.

The whole thrifting thing involves a lot of patience and luck, so I like to think of the paying it forward as a sort of thrift karma. That, and this particular jacket really needed to find a home on the coast.

I remember that, uh, unique thing, too. I'm sorry it didn't fit you, but I hope that YWP makes it work.

Dear sir, I am saddened that your wallet is to skinny for all those dollars. Mine on the otherhand is quite wide, expansive, and empty. Please forward the improper fitting bills to me posthaste. The universe will be pleased and I promise to the money's new home will be pleasant and safe.

Worth a try right? My silliness aside, well done.

She's at the tailor now getting wrangled into shape. The jacket is truly insane. The lapels are outrageous and the tailor's eyes widened when I walked in with it. While Giuseppe and Mr. Midwester are both good at paying it forward, I plan to pay you both back during upcoming visits. Mr. M will get the scoop of the first photo, too.

Know the feeling well. I've recently come across lots of great looking sport coats, only to look inside the pocket and see a 46 or 50R!!!! Sadly, I'm a 40R. Still, maybe YWP will post a photo or two of himself modelling the blazer.

Still haven't rigged those Quoddy's with insoles yet, eh? Man those things were effin' uncomfortable.

My Uncle had that very jacket

I think this is the EXACT same blazer that the town commissioner wore in Jaws.

Anonymous: It's pretty close. Looks to be the same color, but Larry Vaughn's jacket had little anchors all over it - http://application.denofgeek.com/pics/film/list/pol10.jpg