In the old days, I worked in a down and dirty crazy thrift shop. We had a record department. Not like we just sold records, we actually had a full blast record department, and I was in charge of it. This meant that besides organizing and pricing all the records, it was also my job to go out and find them. I loved it. Once, when I was out scouring the globe for slabs of vinyl, at the tender age of 24, anno Domini 2000 or so, I acquired a heap of r&b for the shop. Among it was the self titled first album by Funkadelic. 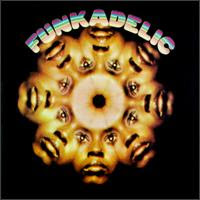 By this time in my life, I had heard of Parliament Funkadelic, or "P-Funk". I knew all about George Clinton. Dr. Dre and Snoop Dogg had made my generation aware of them. But 1969 era original Funkadelic was something else entirely. Sure, the outrageous outfits and showmanship of the later years would steal the show, what with Bootsy Collins and all. But this old stuff was raw, simple, drect and grimy. Funk in its purest, undistilled form. Funk driven by gospel harmony, Hammond organs, Fender and Gibson guitars, and Gretsch drums. Funk that still has the stink of Jazz on its boot heel. Funk with a meaning far deeper than simple goof ball, pimped out party jams. I was hooked the minute I got this record home, and 10 years later it remains a precious favorite. In all these years, its the only record I know of that can actually make you feel a little like you've been smoking weed, given of course that you know what that's like in the first place.

correction: Rogers drums, not Gretsch. Equally good, if not better.

p.s. A black man in a purple satin KKK robe with police style sunglasses. How are you gonna argue with that?

Hot on the one! Great stuff.

No accounting for taste.

Real music, made by real people and not just lopped and sampled and cleaned up "singers" via voice altering software.

I like when funk songs like this don't have any kind of verse-chorus-verse structure. They just groove for as long as they feel like. Papa Was a Rolling Stone is another that comes to mind.

Rogers drums are great but never better than Gretsch.

You can tell that song was written to be performed for 45 minutes in front of some sort of drug fueled, sexed out, slow motion frenzy, it's not a song that goes anywhere, just gives the people some space to travel in.

I always thought Funkadelic undisciplined. Unlike Fat Back who had to have been the Beethoven of Funk just at the close of the Funk era. You must'a missed my tribute here:

I first saw George Clinton et al at a Seattle nightclub about 20 years ago. Washington state--at least back then--had pretty much zero tolerance when it comes to closing time--two o'clock, everybody out or risk losing your liquor license. These guys didn't care. They played until nearly 2:30 a.m., stopping only when the club forced the issue by turning on the lights, and even then, it took ten minutes or so. I had been bit reluctant, being that the ticket was top dollar (GC has always been known for that), but the night was worth every penny, and more. One of the best shows I've ever seen, and I've seen a few. Saw them twice more within the next half-dozen years, each time with diminishing returns. It was the same schtick, the same script, but with less heart. The third time, I knew it was over. The guitarist, whoever it was by then, phoned in Maggot Brain. George, whose drug problems became apparent soon afterward, was barely on stage at all. They showed up late, and I left early. There just wasn't any point. As Johnny Rotten infamously said, I definitely got the feeling I'd been cheated, at least that night, but to have seen that band back in the day. I can only imagine what it would have been like with Bootsy.