When the hurricane comes to town and you get shut in for the day, it can be hard to fight the old cabin fever. True, its only one day, but one day locked up can drive us modern city types crazy. You can either feed the disease by staring out the back door wondering if the rotten old tree in the neighbors yard is going to fall on your house (which it didn't, thankfully), 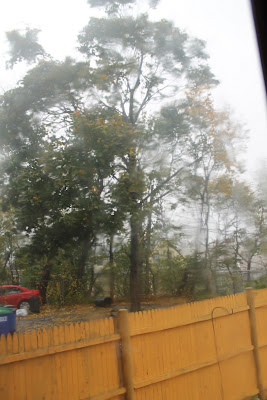 ...or you can take the opportunity to cook something for six hours or more, just for the Hell of it. For me, this means channeling the ghost of my Nonna and cooking up some serious old school tomato sauce. Since I certainly wasn't dressing for anything yesterday, and since its a been a while since we geeked out about food here, I thought it was time. 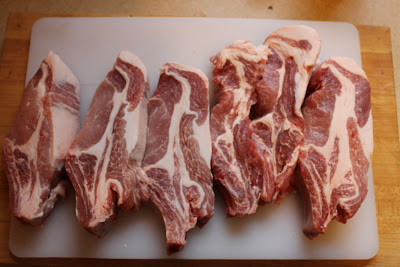 The whole thing begins at 11 am with some very thick cut, country style pork ribs. For other recipes, meat like this is way too fatty, but trust me, after an entire day in the pot that fat is going to melt away into the sort of robust, earthy flavor so satisfying during such bad weather. It's a flavor that cannot be imitated in any health conscious or low fat way, but since we rarely slow down enough to eat this way, who cares? 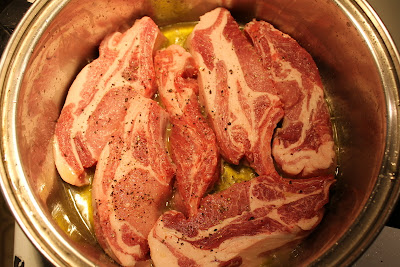 After a liberal seasoning of salt and pepper is applied, the ribs are browned in a heavy pot over high heat in olive oil. This shouldn't take more than a few minutes per side. 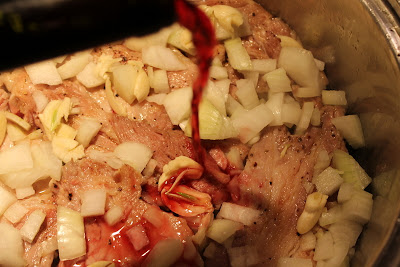 After the meat has browned, throw in a chopped white onion and five or six cloves of mashed garlic, along with a liberal dose of red wine. Let the meat cook in the wine for a bit, turning once. 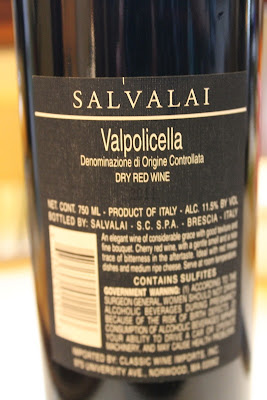 I firmly believe that it is a wasteful sin to put good wine in the sauce pot, but I don't abide the use of junk in any situation. Salvalai Valpolicella is a dry if simple Northern Italian red that can be had for $8.99 where I live. Cheap enough for the sauce but drinkable enough for a pizza. The bottle I grabbed was missing its front label. Call it taking one for the team. 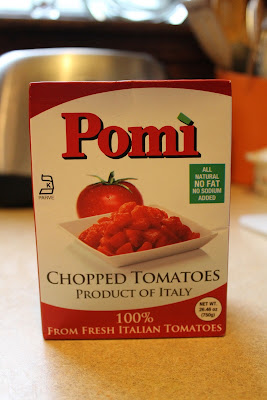 Next in is the tomatoes. In truth, any brand of canned tomatoes will do, but if you can get them I prefer Pomi chopped tomatoes in the paper carton. They are a bit more expensive than some brands, but still only $1.99 a carton. Imported from Italy, they are brighter with a fresher taste and no other ingredients than tomatoes and they're juice. I find the chopped kind to have just the right consistency, cooking down beautifully into a chunky sauce. 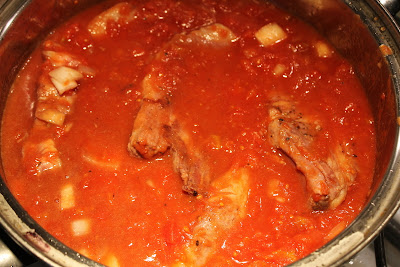 For this sauce I used two cartons. After pouring in the tomatoes, loosen the meat from the bottom of the pan. This insures that it won't stick to the pan, and allows the sauce to flow under and around it. Up to this point, the whole process takes about twenty minutes. Like all great Italian cooking, the beauty lies in its sheer direct simplicity. All that's left to do is put the lid on slightly ajar, turn the flame to the lowest setting, and wait until dinner time. Occasionally move the meat around a bit, and enjoy the smell that will soon fill the entire house as you look contentedly from your favorite chair at the howling storm outside. 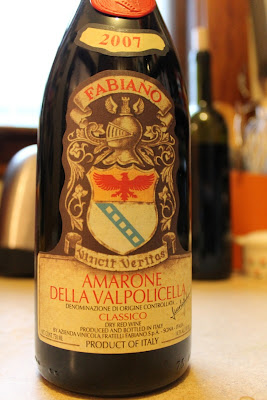 Cooking wine is one thing, but drinking wine is another. A meal like this is a celebration really of the fact that for once we can all slow down, even if our relaxed pace was forced on us by Mother Nature. As such, despite my consummate cheapskate-ism, I decided that something special was in order. Fabiano Amorone della Valpolicella Classico 2007 is a big, gutsy wine.﻿ Tight as a fist when its first open, I decanted this bottle at Noon and left it aside until dinner. At $50 a bottle, it sure isn't cheap, but you get what you pay for. Besides, you know I didn't actually pay that much for it.  Working in the wine trade has its advantages. 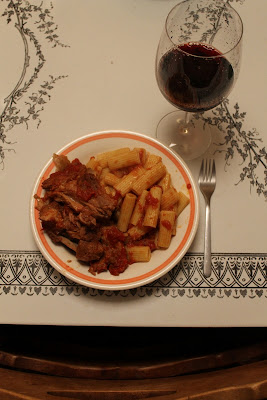 Come 6:00 pm, I boiled a pot of water to cook up some pasta to serve with it. The meat was so tender it fell from the bone, and a fork was all that was needed. This kind of food takes me back to my childhood, when the house was constantly filled with the comforting smells of slow food such as this. Back then my Nonna did the cooking, but she did it in the same kitchen, and for me that's something special. ﻿ 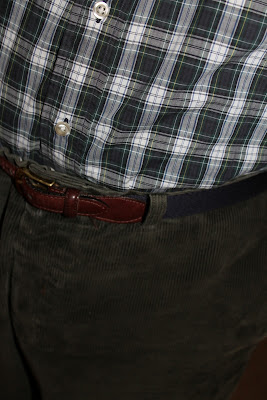 Since this is ostensibly a clothing blog, I suppose I should mention that I spent the day in an old pair of olive green cords and a worn plaid shirt, both by Brooks Brothers, with a pair of Toms on my feet, because dammit, they are comfortable. I showered, but I didn't shave.

A useful reminder that we all need punctuation in our lives and nature sometimes has to enforce that.

I enjoy these culinary interludes! I still use the sausage stew you wrote about years ago. Greetings from Chicago, -j

Looks delicious! One thing I do when making ragu - add a few shakes of asian fish sauce. No more than about a quarter to half teaspoon. It add dimension to the meatiness in a nice way.

Sir,
I come from Verona, exactly the same part of Northern Italy where Valpolicella wines come from.
Here, they cost immensely less than in Massachusetts.
If it weren't for the shipping prices and custom regulations, it'd be great to exchange Valpolicellas for sack suit (that here, even at thrift shops, are extremely rare and expensive!).
Regards,

Greetings from the Veneto...I live just east of Verona and figured I would add to the discussion.

Fabiano is one of my favorite producers from the area -- not the most renowned but very good quality and value. The Fabiano Bardolino Classico "Il Torcolo" is an outstanding lighter-bodied red. Fabiano's Bardolino Chiaretto is a great rosato for the summer.

IMHO Fabiano's Amarone is OK. If you can, check out the amarones from Marion, Tenuta Sant'Antonio, and Le Ragose, which are all around the same price point. I believe they have distribution in the States (not 100% certain about Le Ragose).

I don't know if you have a nook or the hankering to spend $5 just to look inside, but my mom had a similar upbringing to you and I assembled photos and recipes here. Don't know if you can find it anywhere else -- it was a lulu book I did for the family a few years ago.

Another way to punch up the flavor is to use a dash or two of Worcestershire sauce or bitters. Both are more complex than fish sauce, and, used in small quantities, will add a certain something to sauces, soups, and the like.

Regardless of what you use, remember that both fish sauce (nam pla, nuoc mam, patis, ishiru, shottsuru, or whatever ethnic name you may know) and Worcestershire sauce have fish and salt, while bitters have neither.

No basil, oregano or parsley???

Just gave this recipe a try today. Turned out great. Delicioso! Found a nice bottle of Chianti to go with it.