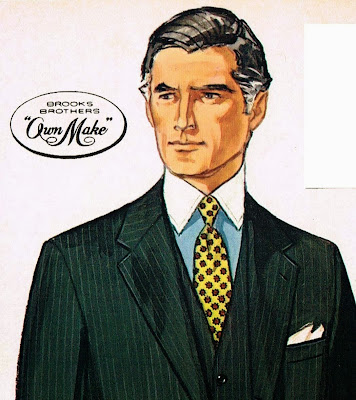 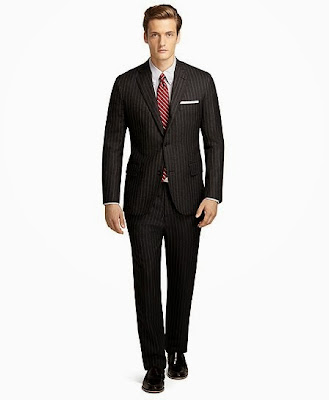 There is a lot that continues to amaze me about the thing we have taken to calling, for lack of a better term, the "online menswear community". The very existence of such a thing in the first place is enough to astound anyone old enough to remember what life was like before such large portions of it were spent in front of any one of a number of screens. At the age of 37, I just barely make that category, but I can still remember stretching the phone cord down the hall from the kitchen to my room for some privacy.

By and large, the world of blogs and websites devoted to menswear, or anything else, has proved to be a largely positive thing. There is no end of information readily available on any subject, and with it comes an even wider range of opinion and comment. All that's good, but it can lead to a blurring of the lines between legend and truth, and can foster a spirit of extreme narrow-mindedness about rules, regulations, and traditions, be they real or imagined. Nowhere it seems is this truer than in the circles of menswear enthusiasts, with Brooks Brothers so often saddled with the dual personality of Vanguard of Tradition/Soulless Traitor, or rather Legend/Reality.

If you're reading this blog, chances are you have at least once encountered a blog or website where some one happened to mention that Brooks Brothers clothes are not precisely the same as they may have been some time ago, which was quickly followed by a torrent of comments bemoaning everything from the difficulty one has in finding a dartless jacket to the absolute downfall of civilization as we know it.  I would never say that there is no meaning attached to the things we were, but the fervor over the smallest minutiae that tends to occur when discussing menswear, particularly "traditional" menswear, can be staggering. Too bad, really, as this sort of thinking misses the point entirely of dressing well or with style.

Pictured above are two men representing Brooks Brothers. The first is from a mid-1980s catalog, the second from the current website. Both men wear a charcoal striped business suit. The first, a three piece, no doubt in a conservative, natural shouldered, three button "sack" (dartless) cut with flat front trousers. His hair is grey, distinguished. He is a grown up, no kidding.The second man's suit is cut in a more modern "trim" style. Some might say that his clothes look to small, and I would agree. But remember, he is a model on a website, not you. There is nothing stopping you from buying the same suit he is wearing in a size that fits you more appropriately. Lets not forget also that the first man is not  real person, but a watercolor painting.

You know the drill, you've heard it all before : "That suit is deplorable. Brooks should be ashamed.", "I blame the Italians.", or best "Why can't Brooks Brothers make things like they used to?" I mean, god help them, don;t they know there are literally dozens of us who would buy a frumpy sack suit from them, as long as it also met a further list of minute requirements?

The fact is that the world is not the same place it was forty years ago. Brooks Brothers is a huge international company making business decisions based on things bigger than the tastes and proclivities of an increasingly small pocket of men in the United States. Simple as that. You may hear people bemoaning what they see as the death knell for Brooks all over the menswear blogs, but as far as I can see, from a business stance, they seem to be doing just fine. That is, after all, what businesses do. Besides, so many of the Legends of Brooks Brothers could stand to be tempered with a healthy brick of salt. The "rules" that are regarded as sacrosanct when it comes to this stuff were never really so strictly observed by the real men of New England who wore this stuff.

I was reminded of this recently while on a consignment house call in an affluent Massachusetts suburb. The clothing I was looking at belonged to a deceased surgeon. It was all very traditional, lots of Brooks Brothers. There were grey sack suits and three patch pocket blazers, plenty of striped ties. But among the stacks of khakis, cords, and moleskins, I found as many pleated fronts as flats. There were button down and point collar shirts in the same closet. Some jackets had darts, some didn't. And they were all worn together by the same man, a real "Brooks Brothers Man" if you will. True, there was a traditional East Coast consistency in his style, but nowhere did I see rigid adherence to minute rules.

The "sack suit" has been romanticized to represent some sort of lost ideal of manhood, maybe, or something. But let's not forget that the undarted jacket and flat front pants, even the two button cuffs, were likely cost saving decisions made so long ago by Brooks Brothers, when the sack suit was the first off the rack clothing available. I love a good sack suit as much as the next traditionalist, but you might say those details also represent the inception of mass-produced clothing. We can thank Brooks Brothers for that, along with the  introduction of Dupont Dacron Polyester. Look where those two innovations led. These facts are easily ignored or forgotten in these discussions. So can we really be surprised or blame Brooks Brothers for paying attention to the market and making business decisions based not on the grousing of a few but the potential to sell as many items as possible? Isn't that kind of what they've always done? Legend/reality?

If what I've said seems negative or bleak, it shouldn't. There is a positive in all this. The world will likely never require men to dress as well as they once did, but that makes doing all the more an act of individuality and self expression. Where the suit was once a type of conformity, it now as frequently represents the opposite. So don't get bogged down in silly rules regarding pleats and vents and button down collars. Let your tastes guide you. Real style never had much to do with rules anyway. Dressing well should be enjoyable. I believe we should venerate what is good in our past, and that these days the "new" is so revered for its own sake that we tend to neglect the past. However, pining for an idealized version of the past and constantly whining about change neither venerates the past nor respects the present or future. It only shows you've missed the point. Don't confuse legend and reality.

Dress well and enjoy it. Otherwise, what's the point?
Posted by Joe at 8:27 PM

Giuseppe, you are a lone voice of sanity in a sea of OCDs in OCBDs. That is why I read this blog.

I have gone through a very similar consumer mindset as I have worked for Ben Sherman for the past 10 years. A few years back Ben Sherman had the audacity to try and broaden their customer base and add some much needed variety to the line. Of course the "traditional" Ben Sherman customers (mods, skinheads etc.) could not be more displeased by the company’s need to turn a profit (even though we still sold the items that they so lovingly purchased once every 5 years). Trying to explain to these purists that a big, international company cannot survive on the small subcultural pockets of customers was an exercise in futility.

Excellent post. Brooks Brothers still makes some great clothing (some here in the US), and while they make mistakes, that's hardly new, for them or any other clothier. Even the much-derided (by internet gentlemen, at least) Black Fleece line has some good pieces, if they're taken individually.
Also, though internet gentlemen don't talk about it much, their women's line is good and getting better, which is much appreciated by my wife.

I don't read your blog too often, but this one I really enjoyed. I'd like to comment-
you said "...they seem to be doing just fine. That is, after all, what businesses do."

Cheers from MN :) Where we have 2 BB stores. Glad they're here.

I meant "what businesses do" is make decision based on things bigger than the complaints of a few anonymous complainers.

Good analogy. Its the same stilted thinking that punks employ when a band they like is finally recognized for their talent.

Great post. In the current climate we should salute any man bothers to try to dress well, not attack him for getting an antiquated set of rules "wrong." As a onetime punk rocker now obsessed with tweed, I feel as irritated by this traditionalist fascism as I was by kids who bought leather jackets, painted CRASS on the back and then beat and tore up them up until they looked "authentic."

A very enjoyable post. I like the positive outlook. Although I would hesitate to encourage men to "let their tastes guide them." Only joking of course!

I know G :) That improves their chances of staying afloat.

Imagine the nerve of this company, trying to remain profitable. The shame of it!

Thanks for the link. From the article: "Style choices, by definition, cannot be wrong." I guess that about sums it up.

Also, I prefer an oxford comma.

When in doubt, choose Oxford cloth and the Oxford comma, and you won't go wrong.

Well said! Another thing is that on the occasions when the companies Brooks etc... make a classic item with all the details the internet forum, blog community will likely find a way to discredit the said item:

I've seen this happen lots of times. Brooks must iron made in America ocbd? They'll complain about the lined collar or their sack blazer? they will say is doesn't have soft enough shoulders...

Nothing Brooks do will ever live up to the vintage items they have in their closet...

What I've found is that most of these internet menswear aficionados have never been inside a Jpress or the Madison Brooks. Their experience with these clothes is one they attained by 'fishing in the eBay" or Etsy... There's nothing wrong with vintage, but these guys forget that these clothes are mid to high end and if they were to be reproduced exactly for today's world they would be expensive (like they always were!!)

I believe their "mantra" of decline while somewhat true, also serves as a way to justify never having to buy new...

their rules show that they've learn their style vis the internet and the narrow point of view implies a lack of travel, a lack of real life exposure to cosmopolitan life and a certain lack of self awareness.

in a way all this is funny and ironic because they are the total opposite of the original owners of their clothes...

Like I said, I love vintage but I acquire new clothes, it's important to move on and allow for change

As a long time lurker I think this is the first time for me to write a comment on her... And what can I say? 100% agreed!

Keep on writing such good posts...

All the best, Dominik