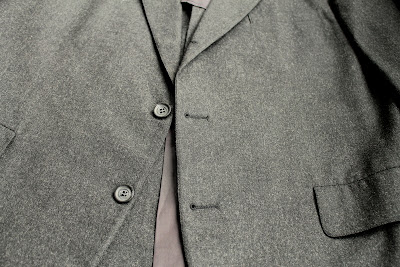 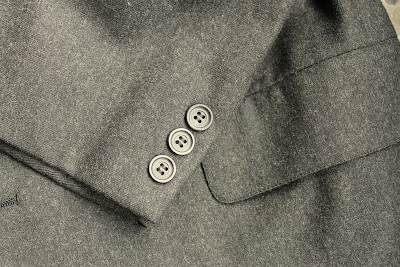 A two button cuff on such a coat is typical. Three button is rarer...﻿
﻿ 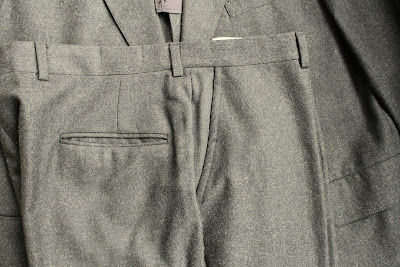 Flat front pants with a relatively straight cut, of course....﻿ 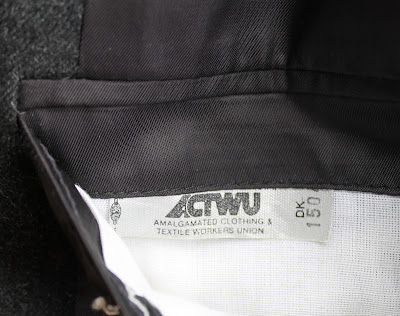 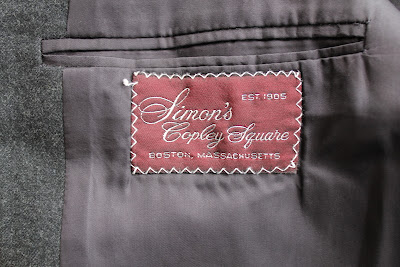 From Simon's Copley Square of Boston Massachusetts, my high school job. $14.99 at a local thrift shop.

I worked at Simon's Copley Square on weekends when I was in high school, from 1992-1995. I loved that job. Already an incurable clotheshorse, Simon's not only provided me with an excuse to wear suits, but also allowed me to play with clothes all weekend. I used to love getting dressed on Saturday morning and taking the subway into the city. I miss that.

These days my own personal style leans towards the classic American look, albeit with a bit more foppery than the rules would entail. But this wasn't always the case. Back in high school, I was stuck on a more 1940s vibe. I watched a lot of old movies on cable back then. Think broad shoulders, ventless backs, double breasted, high waist pants with deep pleats and braces, wide brim hats, Brylcreem, and tons of those awful wide ties with garish geometric designs.﻿ I used to shop at Keezer's and the real Filene's basement for size long suits despite my 5'10" height, because the longer coats and higher rise pants had a more 40s feel. At least I though so on my 17 year old brain. I had it down to a science, and I knew I looked sharp. Mrs. Simon felt otherwise.

I was there in the final years of that business. In its prime, Simon's like so many other faded and gone places, specialized in traditional East Coast menswear. It was all undarted jackets, flat front pants, repp ties, button down collars, Shetland sweaters and GTH pants on the weekend. In the early 90s, things were different. Pleated pants were the norm, and we sold more Countess Mara ties than we did repp stripes. These things always upset Mrs. Simon, but her husband Harold and son David were desperately trying to keep the store relevant in the face of places like Jos. A. Bank and Mens Wearhouse, both a block away in either direction, who were stealing so much of there business. She would counter that Brooks Brothers was also a block away, but by then even the Brooks Brothers customer, and look, was becoming unrecognizable in a sea of homogeneity. Still she erred to there judgement, and things chugged along.

I would dress the displays with the hands in the pockets and the jacket pinned back. In the window I would sometimes furl the tie and pin it to look like it was blowing in the wind. This was too much for her, and she would frequently make me undo a display and dress it conservatively, with the jacket hanging straight and the trousers laid down in front.
﻿
My clothes drove her mad, but in my youth I never knew why. After all, I dressed like the 1940s, right? She and Harold were young and dating back then, right? He dressed like this, right? Nope. Wrong. Dead wrong.  Anyone who has read the now classic book Class by Paul Fussell knows what I mean. When I read the parts of that book on clothing again recently, memories of Mrs. Simon's disdain for my baggy, garish clothes kept coming back to give me a chuckle. She wanted Douglass Fairbanks, and all I could muster was Tom Cat. I just didn't know the difference yet.

Isn't it funny when we look back at ourselves and thought how cool we looked? Makes you wonder if the shabbily dressed youth of today will look back on themselves and cringe at the thought a raggedy t-shirt, flannel pajama bottoms and flip flops was stylish on them.

I'm not sure that people who wear raggedy T-shirts, pajama bottoms, and flip-flops in public will ever realize the inappropriateness of their attire.

Proper attire is best inculcated from an early age, as G is doing with his son. I'm happy to be able to say that my preschool-aged son loves to wear "Daddy shirts" (i.e., collared shirts), neckties, and his blazer.

But, as you got older, you (and I) learned the one of the most valuable things about the trad style -- it always looks good, yet basically never changes.

I don't think you ever told us why you left that job, especially since you always write about it so fondly. Did they go out of business in 1995, or did they survive longer but business got so bad by then that you were laid off, or did you choose to quit? I recall you saying they largely abandoned trad merchandise at the end, and that Mrs. Simon was appalled.

I love Fussell, too. I wish he would do an update, but perhaps to do that would be to miss the original point of the book!

I remember going into Simon's a few times in my early 20's (15 years ago). I know I wanted to buy clothes there but I couldn't afford them. But I remember the staff being nice and just letting me browse around. Hopefully a place like that pops up again in the Boston area in the future.