Whiffs of Spring (and a giveaway) 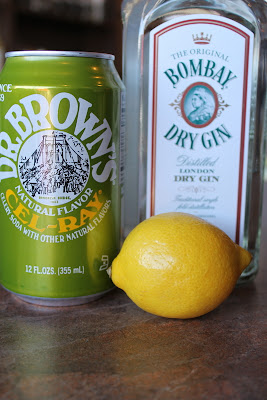 Celery soda is weird and even kind of gross. It smells like celery, but it's sweet. Almost like ginger ale, except it's celery. While I'm sure there are those out there who like this stuff on its own, or at least claim to, I'm not one of them. However, I have recently discovered that combined in a tall glass of ice with an old fashioned light gin, such as Bombay or Beefeater, a big squeeze of lemon, and maybe a dash of ginger liqueur, it makes a damn good Spring/Summer cocktail, the kind of thing you drink poolside in Lily Pulitzer pants or a pink sports coat. Only thing I can't settle on is a name. 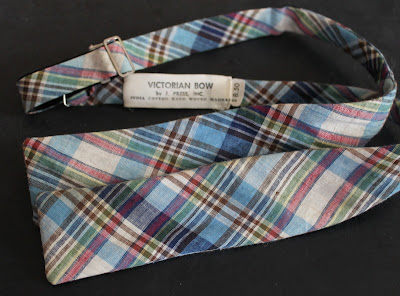 I'll give you guys until Midnight Easter Sunday to come up with a name for it. Leave your suggestions in the comments. Best answer will receive this vintage India madras "Victorian Bow" tie by J. Press from my own private collection.

1 April 2012 : The contest is now closed to new entries. Thanks to all who contributed. I'll review the entries along with the two fellows who originally sampled the drink with me, and a winner will be announced by mid-week.

5 April 2012: We have a winner! Honorable mentions go to Jon for "Gin Ray" and Unknown for "Garden Party", but in the end the prize goes to AEV for "Cellmate", though I'm going to amend the spelling to "Cel-Mate". Congratulations, AEV. Email me and we'll send you the tie right away.

I would name it after you and call it "The Thrifter"!

How about a Doctors Lapel (after Peter Davidson's tendency wearing a stalk of celery on his lapel as the Doctor and a nod to it being made Doc Brown).

Or maybe a Grassy Knoll for all of the veg and herbal components.

'Crisp Martini'...that or 'a day at the races' not sure why but that sounds fitting.

How about a "Raj Quartet"?

Why not call it a "Victorian Bow?"

I'd call it a "March Hare" after the character in Alice's Adventures in Wonderland.

1) It's herbal vegetal flavour profile might be something appealing to a hare or rabbit.

2) The name conjures the same kind of quaint English "home counties" feel that all Gin based drinks have.

3) As a summery drink and given it's still damn cold in March at least where I live ) as is said in the book "The March Hare will be much the most interesting, and perhaps as this is May it won't be raving mad -- at least not so mad as it was in March."

have you ever tried that artichoke soda? now that's ghastly!

At one time Kalamazoo, Michigan was a major producer of celery. You can read more about the history here: http://www.kpl.gov/local-history/business/celery.aspx

In honor of that heritage, I suggest you name your drink a "Kalamazoo Fizz"

Could keep it clothing related as a Bombay Stalking.

This seems to me a springtime take on the classic Bermudan cocktail, the Dark and Stormy. Once you've swapped one particularly funky soda for another (Cel-Ray for ginger beer), replacing the spirit and citrus seem only natural (dry gin for black rum, lemon for lime). The alterations to the deep and spicy flavors of the traditional leave us with the bright and herbaceous flavors of the contemporary. The optional ginger liqueur hints at the cocktail's piquant ancestor.

As simply as that, you've transmuted the Dark and Stormy into the Bright and Sunny.

Why? Victoria, Empress of India appears on both the Bombay Label and the bowtie's name. "Tonic" calls to mind the G&T, where gin likewise mixes well with the otherwise unpleasant taste of quinine. Lastly, celery and gin have a long, though possibly misguided, medicinal history.

Cel-ray was originally marketed as Celery Tonic. When FDA objected to describing it as a "tonic," Dr. Brown's changed the name to Cel-ray. So it seems to me the ideal name for this drink is a "gin nontonic."

Given the inclusion of leafy vegetables and its appropriateness for warm weather, how about a 'spring rabbit'?

(The actual name for this cocktail)

My immediate thought after reading the ingredients was to call it a "White Bovril".

Plus all your art friends will think you're brilliant (Man-ray reference!)

Cel-Ray was mentioned in the Seinfeld episode "The Pothole," which is a funny if not particularly appetizing name for this drink.

Since I cannot think of anything not ridiculous: Cel-Ray was (and maybe is?) very popular in New York delicatessens and was sometimes called "Jewish Champagne." Given that it is mixed with gin here, call it "The Disraeli" (or "Disraeli Champagne," if you must).

The Garden Club. Perhaps the nearest one'll serve them up.

Wow, all of these names are really solid! My contribution is based more on the prize rather than the ingredients. Why not just call it the "J.Press"? Every store should have it's signature cocktail, and wouldn't J.Press' be a lil bit quirky, but harking to a relaxed, springtime gathering? Here's to Spring!

A round of "Space Cadets" for my pals and I.

You could add a splash of grenadine and call it the Guaranteed to Bleed.

the Lion and the Lamb.

How about a Cadmilus Cooler? Named after the Greek demigod who is credited as the source of celery.

Calcutta Telegraph. To me it rings of British imperialism, something a Viceroy of the Raj might drink whilst wearing a pith helmet.

My runner up was Gin Palace

a spring slammer or maybe a mean Green?

The "Lite and Tight".

Spelling contingent upon preferring to immortalize the location or the season…

Since the contest is over I'll just add my two cents that there is nothing finer for washing down a pastrami on rye with mustard and coleslaw.
Dr. Browns Cel-Ray has been a staple at delis since time immemorial.

Thinking about that combination of flavors, it sounds like a short cut Pimm's cup.