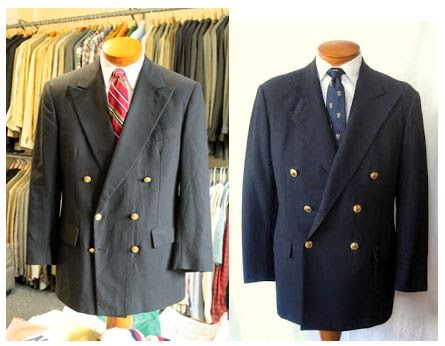 Despite their similarities, its the differences that are most striking. The Andover Shop jacket has a more natural shoulder, while the button stance is more rigid and conservative. It has a darted silhouette, but is generally reserved. The Polo jacket has a soft extended shoulder and somewhat more "draped" chest, reminiscent of London tailoring of the 1930s. It has a more dramatic cut, yet the button stance lends it an air of casual elegance. The Andover Shop blazer has a center vent, despite being double breasted, while the Polo jacket has easy side vents. 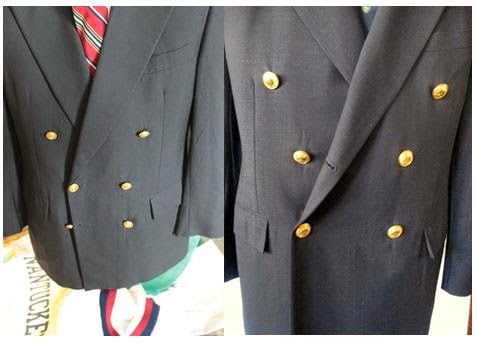 They both have the same button stance, but they don't. The Andover Shop blazer has a hard nailed 6x2 stance, while the Polo has a soft version of the same thing. The Andover Shop jacket buttons lower, but has a more square set that the Polo jacket, which creates more of a swooping triangle without being hopelessly "90s". 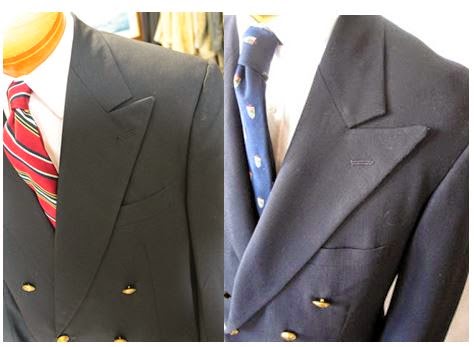 Both have peaked lapels,  but the slight variations are striking. The Andover Shop blazer base very traditional peaked lapels with enough interior structure that they lay straight and flat to the chest. The Polo jacket has a more dramatic, wider lapel, with a sharper point, and less interior structure that allows it to "flop" a bit when moved. Both are size 42 regular, and both fit me well. The Andover Shop is a recent acquisition, the Polo jacket has become an old friend.

Strictly speaking, anything from the Andover Shop is inherently better than its equivalent from Polo, or is it? While it's true that the Andover Shop is a small and storied shop and Polo is a big ugly multi-national, in this case the decision is not so black and white. The Polo jacket has a slouchy nonchalance I like, tempering the formality of its double breasted cut with a certain ease. The Andover Shop has a more straight a head approach, good in its way, but less suited to the way I might wear such a blazer. For example, while I wear the Polo jacket with a shirt and tie most of the time, the other day I wore it open with a white tennis shirt and very faded jeans. It worked great, whereas the Andover Shop jacket would have failed miserably in the more casual application.

This is by no means to suggest that Polo is "better" than the Andover Shop, or vice versa. What I mean to tell you is that it's more important to find quality garments that not only fit well but are styled in a way that fit the applications in which you'll wear them. In this case, the Polo jacket was the better choice for me, for another man the clear decision would be for the Andover Shop.  What is "best" is what suits you most, whether or not it was the "better" thing to start with. Thrift stores have a way of leveling the field like that.

p.s. the last time I wore my Polo jacket into the Andover Shop, Charlie complimented it, then checked the label and muttered "goddammit" under his breath.

p.p.s. That Andover Shop blazer, among many other great items, is coming soon to the AAW Shop. Stay tuned.
Posted by Joe at 9:48 PM

This is very funny:

"p.s. the last time I wore my Polo jacket into the Andover Shop, Charlie complimented it, then checked the label and muttered "goddammit" under his breath."

Competition can be ugly, but sometimes it has its humorous side, when it is not over life-and-death issues, but over a double breasted blazer.

Thanks for yet another literate and informative piece. Could you elaborate, for a neophyte, on the difference between an "extended shoulder" and a shoulder that's just too big?

That is great piece: fun and thoughtful without it seeming like you were trying too hard. Wish I could write like that!