Another Whiff of Spring

Just warm enough today to leave the Barbour at home. Good thing, too. With this mild Winter we just had, that coat has seen a lot of use, and it's just possible that I might i fact be sick of wearing it just now. 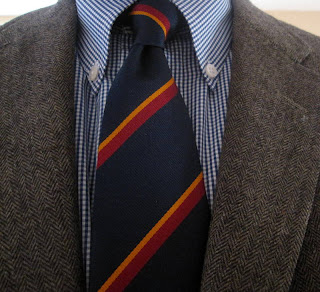 The bright orange stripe in this Ben Silver repp tie ($1.99) may be small, but it goes a long way to lifting this relatively staid combination of blue check shirt and brown tweed jacket out of the doldrums. A whiff of Spring, just a whiff... 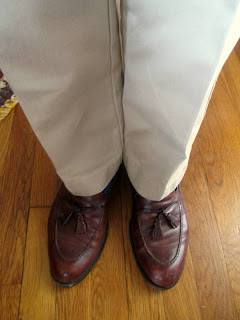 Cotton khakis make an early appearance. For many, khakis are a go-to year round trouser, but I find them to be too light in Winter, even when temps are unseasonably warm. Now that they're out of the closet, they'll likely make multiple appearances each week until they go away again. 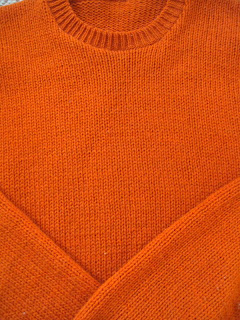 The scarf and gloves I carried in my tote bag as extra protection against late night chill have been supplanted by a light wool crew neck in crazy orange ($1.00) one of my new favorite items. Another whiff of Spring? Or is this sweater a deep breath? Either way, I love it.
If this ensemble looks familiar, it may be that you've seen something like it before: 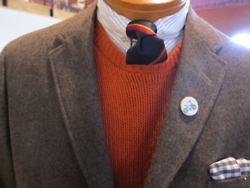 Bill (my trusty suit form) wore it to the Drill Hall Flea Market recently. Is it mild schizophrenia to be influenced by oneself in sartorial choices? Or merely unforgivable narcissism?

This outfit combines warm elements with lighter ones, drab colors and bright ones, in a way that pays heed to both the time of year and the weather of the day. I say something like this every year in early Spring (and again in early Autumn): transitional dressing can often be the most difficult to maneuver, but also the most fun.

Looks good Giuseppe. No bright socks with this rig??

More autumnal than spring I feel.

I love the tie! Great page!

You look like a fucking idiot, you dumpster-diving greasy guinea...

it's got a distinct andy barnard feel to it

I'll be honest, the tie is not my bag, but I understand the reasons for including it to give the 'whiff of spring.' You're right that dressing in the transitional periods is not easy, but you make it look so easy.

Like the tie bar. Haven't sported one yet but am going to get some on shirts this year.

I may look like a f*cking idiot, my brave anonymous friend. You, however, actually are one. Best of luck with all that hatred and resentment. The ulcers must be more than you can bear.

Now, iff you'll excuse me, I'm going to eat a bunch of pasta, spill cheap red wine one my undershirt, then go digging in the trash and not bathe all week, like any self respecting guinea would.

I love the outfit, actually.