The Boy and the Girl are being raised on a steady diet of The Jams and Daddy's other incorrigible anachronisms. Mamma's too, though her anachronisms are sometimes different from mine. Recently, this has manifested itself in the purchase of the children's very own record player: 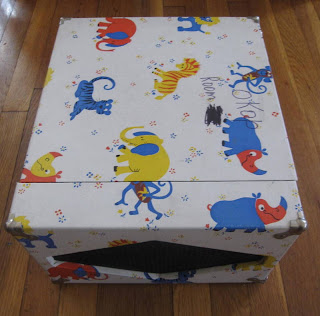 Spotted by Mamma and purchased by Daddy, it's a heavy old "portable" thing in a cute vintage wrapper. 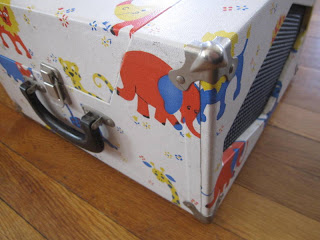 But it's no toy, don't let the monkeys and elephants fool you. Fully equipped with a heavy duty handle, sturdy latch and metal corners, it is as well built as any of the vintage amplifiers my friends have played in my many various bands. The animal print is even in Tolex....the real stuff used to cover amps. 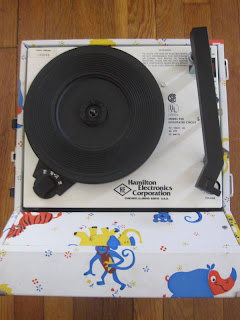 Under the cover we find a killing old self contained mono record player... 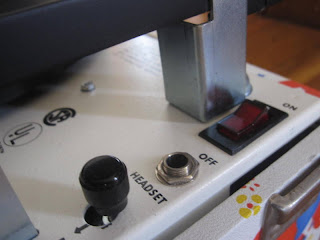 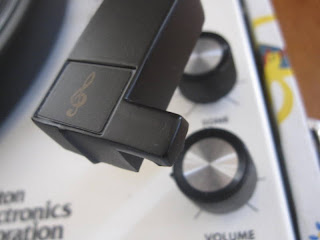 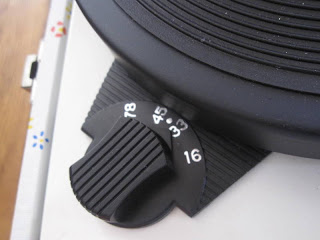 It plays records in four speeds. You thought a 78 was rare? When was the last time you saw a 16? 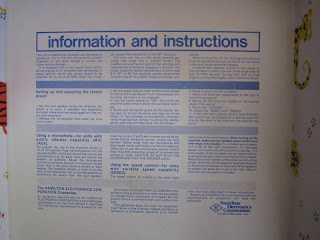 Complete with instructions printed under the lid in full blast design nerdy Helvetica circa 1968... 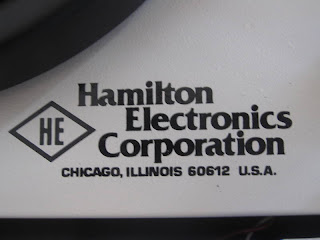 Even that logo is a design geeks dream. I'm on overload here.

Maybe you remember these, only in black. Hamilton Electronics made this kind of stuff specifically for schools. AV equipment, headsets that plugged into booths in the library, and record players for the teachers to use on Friday afternoon along with a slide show. Remember when your teacher wheeled in a bunch of heavy analog and sent one of the kids to close the shades for a "film strip". I do. That's what this thing is.

So I set it up in the kids' room, and showed the Boy how to use it. It was a real rite of passage for both of us. He could barely believe that he was allowed to touch it, given the fact that contact with the "Big Record Player" in the living room by anyone but Daddy carries the penalty of death. I showed him how to turn it on, change speeds, place the needle gingerly and handle a record properly. It's a big deal, my way of teaching that some things are important and special, and deserve to be treated with reverence and care. Then I told him, and the Girl, that for today they could listen to my records, and we had a dance party in the kids' room.

Today, I took them record shopping. For me, it was like bringing them to a cathedral. I almost cried. 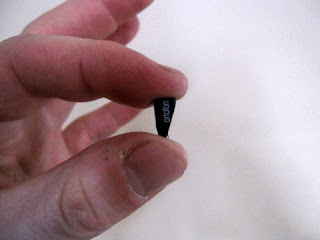 We rode the subway to Harvard Square. Our first stop was Audio Lab, so Daddy could spend $39 on this teeny tiny thing for the "Big Record Player". Worth every penny. 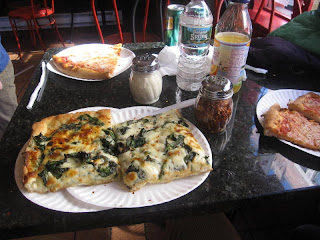 Followed by the world's best pizza at Pinnochio's for lunch... 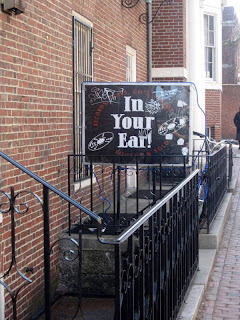 And then a trip to In Your Ear, a full blast claustrophobic crazy dusty little record store in a basement, packed to a fire code defying level with more musty music than you can imagine. My kind of place, I've been a customer there since high school... 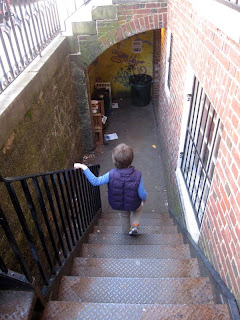 The "down below in a secret cave" aspect of the place did not fail to impress the children.

We poked around and I let them each pick a record to buy, with a smidge of minimal guidance based on what I know they like. They both hit home runs: 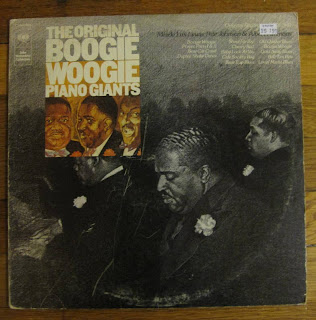 "piano jazzy jams" for the Girl... 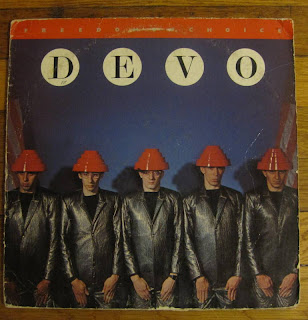 "robot music" for the Boy.

In told the boy he was probably the only kid in school with his own record player in his room. He said "In my class?". I said "No, in the whole school." I told him a lot of kids don't even have a record player in the house. When he asked me why, with a tone of surprise that anyone could live without one, I thought "because most kids parents live in the present". But I didn't say that. I just smiled.

That record player is an amazing find. I am awestruck by the records they chose.

Damn. Mead lux Lewis is a deep cut for anyone let alone a young kid. There's some hot jams on that piano platter for sure.

Great story. Exactly what I'm going to do with my kids (when I eventually have them).

A great find, but an even greater story to go along with it. What memories your children will have.

That is some good stuff! I used to spin jazz records when my son was an infant and couldn't sleep ... and he still has an affinity for jazz piano - I need to introduce him to my vinyl as well... great inspiration!

A 16 rpm is a half-speed master disc...pretty cool if you can find one.

I have always been mystified by the "16" setting on certain turntables. Thank you for the info, jmomls.

Nice.
no need for me to say anything here I've not said before 'cept my eldest is inching toward my vinyl collection now... too cool.

jmomls, respectfully, that makes no sense. With tape or vinyl, faster speeds are higher fidelity, just like higher sampling rates are better in the digital realm. Conversely, 16 RPM moves half as much signal past the needle per minute, and is therefore of poorer fidelity. 16 RPM was a format used to pack lots of content into a limited space - usually speech, not music. For a device made to be used in a school language lab, 16 makes sense.

I love everything about this update. Great find on the Hamilton, and great that you are sharing some of these great traditions and music with your children. My little boy also loves that Devo album.

Thank you for this post. I teared up and they aren't even my kids. You are an inspiration to me. I can't wait to introduce my own little folks to the joy of records. You're right, a great lesson that a little care and respect can preserve something that will bring happiness for a long time to come. Been checking your blog for a while, couldn't help but comment!

And you would LOVE the history behind the pick-up. Ortofon is a very old Danish audio company, located on a very beautiful traditionally holiday island in the Baltic Sea - Bornholm. They have made pick-ups forever, and are one of the very few still standing. They produce some of the best DJ-pick-ups available, some say the only. So your kids and the coolest DJ's share a thing. Congrats