I've said it before. Menswear is fraught with strange and esoteric rules and regulations. It's worth knowing them , because they can be a good guide. But without a doubt, the best thing about knowing the "rules" is that by knowing them, one can have fun breaking them. 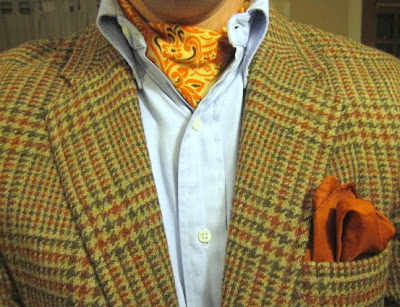 We saw a lovely day in Boston, sunny, with temps touching the mid sixties. The leaves are turning orange, and it was one of those days when the air just seemed especially clean and delicious. Having just swapped the Summer gear out of the closet in favor of the tweeds, I'd been itching to bust one out. This number, picked up last Spring, is one nice piece of wool. And my rusty orange pocket square has finally found it's soul-mate.

So I put about a dozen neckties next to it, some good matches and some bad, but none of them were hitting me. I just wasn't "feeling it", as the kids may have been saying last year. And then I had an idea. I don't own an ascot, but what about that earthy colored bandanna (yes, it's a bandanna) that I heisted from Mrs. G a while ago? Perfect! The effect is sort of country club, sort of Basque goat herder going to market to sell his cheese, more than a little bit "fey" (is that how you spell it?)...or maybe just sort of weird. Anyway, I dug it, and the masses responded in a generally favorable manner. 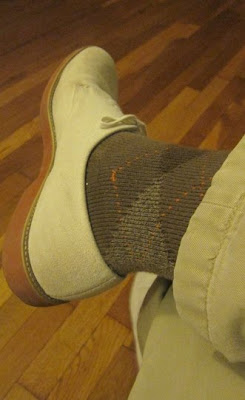 Down below, khakis, brown argyles with the slightest bit of rusty orange, and dirty white bucks. Yep. White bucks after Labor Day, a cardinal sin. But I don't care. This year, I'm on a mission to make dirty white bucks with tweed jackets the new rage. I might be crazy, but I'm quite convinced this look will be all over New York next Fall, by which time I hope to be quite over it.

I love the outfit. It's perfect.

Question: I wrote a while ago about a purchase I made on ebay of a Harris Tweed sport coat. I paid twenty dollars. At the time, you were kind enough to give me some pointers on finding a tailor. The jacket is tight around the middle and I was told by Christian at Ivy Style that jackets can only be let in and not let out unless they were let in before. His assessment was that the jacket doesn't fit and I'm out of luck. What's your experience and opinion? I can button it but there's no room when I do. I look like Tweedle Dee and Tweedle Dum. Thank you.

It's true that letting clothes out is trickier than taking them in. But all may not be lost.

Separtae the lining from the body of the jacket at one of the seams. If the seam has more that 3/4 inch of folde fabric at the seam, thanm a tailor can get you an ich or two of extra space. Christain is right that if the jacket was taken in there's more freedom for letting out, but in the old days jackets were made with extra cloth, just in case a guy neeeded it.

When in doubt, show it to the tailor. He'll know for sure what he can and can't do.

The look is great, but I've got to know what the occasion was that inspired this. Perhaps a drumming gig? Definitely pushing the Thurston Howell III envelope.

Just working the night shift at a wine shop. Nothing special. I have way too many nice clothes that I absolutely don't need, so I've decided to just wear them anyway. Why not?

My husband and I read your blog with much interest. He is the pastor of a church and this morning dressed in a thrifted jacket, tie, shoes and slacks (we THINK his white shirt was store-bought). He stood with confidence because of the tips we've received reading your posts.

We chuckle a lot as we read, but then we see ourselves and settle back in smug pleasure as we enjoy our thrifted treasures.

Giuseppe is right about just asking the tailor. That said I have scored a few sports coats that look great, unless I button them. You can always pull off just wearing it to the sort of things you don't have to worry about buttoning it, like the pub or record shopping, the only draw back is you have to have just the right neckwear to pull it off.

I suppose going to the gym more often would help me, but you can't have much fun at the gym.

Thank you, Pasquale and Giuseppe. So far it's 2 to 2 about whether a tailor can help me. One person said I should take it to a fine men's establishment and ask, but I'm afraid they'll just try and sell me something new. Tomorrow I'll google tailors in my neighborhood and make an appt. to check. I really hate to get rid of it though. I just got rid of a Harris Tweed that I got when I was in college-back when I had a 34" waist. It broke my heart!

Good work on the bandana.

But you really should start your ascot collection.

No neck wear is worse than a few ignorant people thinking you're pretentious or an extra in an old sitcom.

I dig - the whole kit. It's those small details of orange that tie the whole thing together subtly.

You can also try looking on Yelp for a tailor. I'm in the "take it to a tailor" camp. You may spend much more than the jacket cost you--but Harris tweed for $20--even $120? What a bargain!

Great outfit. I've actually taken to wearing cotton bandana-like objects wrapped around my neck during forays into hot territories in the summer; it really helps keep me cooler. Cotton around the neck in the cooler seasons? Why not? Your outfit kills!

And I second the "build your ascot wardrobe" suggestion. I've thrifted three already, and they even do double duty as pocket squares.

I found a couple of tailors to bring the Harris Tweed to, but I think it's beyond help. I tried it on again and it's tight in the back and chest as well as in the waist. From now on, I'm going thrifting instead.

You're preaching to the choir there, friend. I never was a fan of buying clothe son the internet. Spoils the thrill of the "find", anyway.

This looks really good. I'm onboard with the ascot thing. When I step back and think about it, they're not any more silly than bow ties.

I've commissioned Ellie to make me my first. The tutorial, she claims, looks like cinch:

Ha Ha! it's funny you're bringing out the "Ascot" look. My husband found directions of how to make an ascot out of neck ties and is begging me to make him one. They actually are pretty to make yourself with very basic skills. WAY easier than the bow ties!

Oh, there I go, I see he's already commented about it. We'll have to show you the pictures once I get it done.

Hi, I wrote you an email about recommending Boston thrift stores...I'll be there this weekend....some advice on where to go from the master please? Thanks!

G: great look. I can't wait 'till I have a job and can wear stuff like this on "casual fridays."

TCC: Thanks for that link. I might give it a try sometime. Be sure to have Ellie post her results so I can see how inadequate mine is.

Thanks, Horatio, for the advice about the tailor. I really love the Harris Tweed and can't afford a new one right now, so I think I will take it to a tailor as you and the others suggested.

An ascot is not ready for most workplaces! I am fortunate enough to work someplace where I can wear one, but only on selected days when I do not perform my regular job duties. Of course, the fact that I'm one of the few who regularly wears a tie, much less a jacket or, heavens forfend, even a suit, means that my "casual" is everyone else's "wedding togs/funeral attire/Sunday best."

I finally got Ellie to make me an ascot last night. Here's the link if you'd like to see some pictures. I'm going to wear it today to a preachers' conference and for some pipe smoking with friends.

The strongest rig I've ever seen you assemble!

A man who wears a Cravatte sets himself aside from the rest.Check out Kenneth Gillespie for H.T.I have four Harris tweed jackets made by him.Great stuff.