I used to have a really bad habit of keeping broken things around my house with the purest of intentions to have them repaired someday. I got it from my grandfather. That guy was always taking pieces of wood and broken windows out of the neighborhood trash and piling it up in the garage. When he passed away, it took us months the throw it all out. These days, i try to be more realistic, either passing things up in the first place, or giving them a reasonable amount of time to sit around un-repaired before tossing them. And ever since Mrs. G. and I got hooked on this new show "Hoarders", I've been scared into a state of near minimalism.

But there are those few things I just can't part with. I'll have them fixed someday, I swear...

I used to wear this pair of sixties vintage aviators all the time. They've got the thinnest wire rims, the perfect pale green tint to the lenses, and a killer, more square shape. The lenses are actually glass, which is great, except for that damn crack I put in one of them.

By "Ver Ray Mode U.S.A." Anybody heard of that name before? I picked them up a million years ago for fity cents, but they're so nice, I feel sure that they must have been something worth owning at some point in time...like now, If I ever get around to taking them to an eyeglass shop. 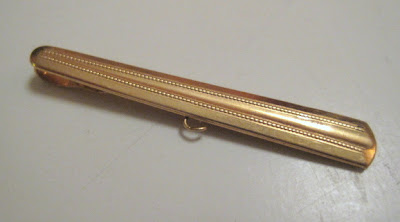 And then there's this 22k gold tie bar that I heisted from my Dad when I was seventeen. I'm not much of a jewelry guy, but this thing is pretty sharp. It's only about two inches wide, so it works well with the kind of ties I generally wear. It used to have a short chain attached to that little ring on the bottom. The chain had a ring on the end that fit around a shirt button. It kept the tie in place, but allowed it to move just a little bit too, so you didn't get that stapled-down look you get with most tie bars. That is until the chain broke off. One of these days....
I know, if you don't use something, it's just junk, no matter how nice it used to be. But I think a special exception needs to be made for these two pieces. Somebody back me up, talk your favorite cheapskate into spending a couple of bucks to fix up some worthy accessories.

I'm in bidding on a Harris Tweed sport coat on ebay. The jacket is $11 in change and the postage is $9.99. I can't afford a new one right now otherwise I would buy one. My problem is that no matter what I get in the way of suits or sport coats, I have to get it altered. They may need to let in the chest a bit and let out the waist. My chest is about a 42 and the waist is about a 40. Is it worth my while to bid on these items and have them altered or should I bite the bullet and get a new one, which I really can't afford. Ideally, I should have tailor-made garments, but that's completely out of the question. Finally, what's the best way to find a reasonably priced, competent tailor? I appreciate your help.

Geese,I hate to say it,but you have to get rid of them both-to me.I will forward my address upon request,thanks in advance....

$20 is an absolute steal for Harris tweed. Even if you buy it new, you'll have to get it altered, so it's a no-brainer. Remember the alterations rule of thumb: as long as it fits in the shoulders, you can usually get it altered to fit.

Tailor? You mean an alterations tailor or seamstress, of course. Try Yelp for one in your area; you can also find reviews by googling something like "tailor (my city)." Once you find a good one, keep him in business and take all your alterations there, and recommend him to your friends.

I'm with the Fogey. What most guys these days seem to forget is that even new clothes need the attention of a tailor before they'll fit properly. No two men are built the same, and sizing is really only a guidline. That's why I own clothes sized differently from different manufacturers.

$20 is a deal for a Harris Tweed, especially since that cloth is built like iron and will probably outlive you. As for tailors, it's really a matter of looking around and finding someone you're comfortable with who will do what you want. Don't forget to check the local dry cleaners. Some of the best alterations tailors are hiding there. 2 extra points if they're old and from either Italy or Hong Kong.

Start out with something simple, like a pair of cuffs on dress pants, and see how you like the work. If you do, give him something more complicated, like a jacket. And remember, it doesn't matter if you buy your clothes at Barney's or in the church basement, as long as you've got a good tailor. I'm off to see mine today.

Contact these folks in Plainville Ma(not too far away from you. They've saved more than one pair of vintage Ray Bans for me!