The time has come for this humble bloggers elegy to an American Original: Filene's Basement, America's 1st off-price clothing store. I'm speaking of course about the one and only real Filene's basement, the one that occupied the basement of Wm. Filene's department store at the corner of Washington and Winter streets in Boston's 'Downtown Crossing", the one that opened in 1908.

For any Boston clotheshorse, discovering Filene's basement was a rite of passage. This was especially true for people like my friends and I, who had aspirations at a well dressed and gentlemanly lifestyle but little to no money.

Every weekend, Id take the train to Downtown Crossing. You didn't even have to see the street, because 'the Basement' had an entrance attached directly to the subway station. 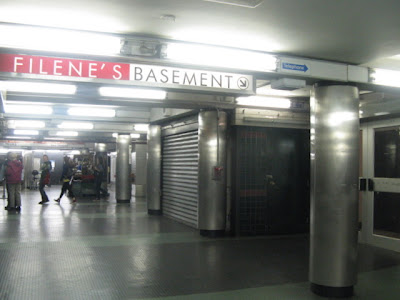 Inside, you were greeted with the most hectic, noisy and chaotic excuse for a store you could ever imagine. The place looked like a real dump. But as you made your way through the women's department, which was closest to the door, and began to notice a lot of Gucci, Dior, Vuitton, etc. (the real stuff, mind you) your spirits would perk up.

So you come to the men's section. This place took as much, if not more, perseverance to shop through than a real second-hand thrift store. Just when you were about to give up, you find a Countess Mara tie for $5, or a cashmere sweater for $20, or a pair of Italian shoes for $8. (this last example is fully true. When I was in high school I found a pair of Salvatore Ferragamo brown leather and white canvas spectators for $8) The best part was that all this stuff was new! It was the best of both worlds: the insanely low prices and luck-of-the-draw adventure of thrifting with the bonus of the merchandise being of outlandish quality and prestige.

The place closed up shop a few years ago when Filene's department store, formerly a Boston mainstay , was bought out. From the outside, on the old corner of Washington and Winter, you'd never know the difference: 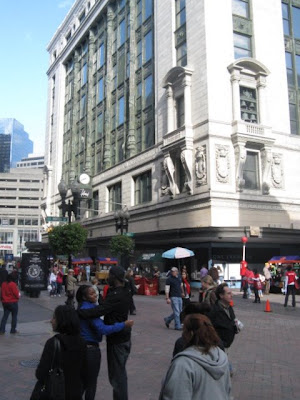 the Filene's building today
Take a look around back, however, and you're heart hits the floor: 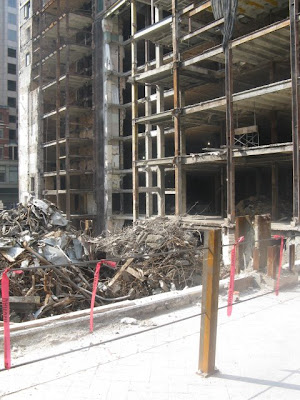 and what you're greeted with in the subway concourse is this depressing sight: 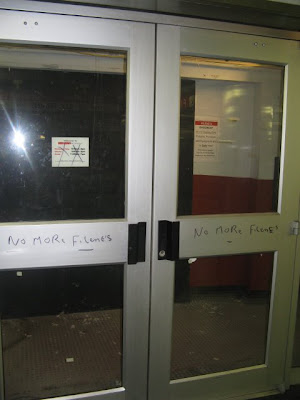 The company that owns the Filene's basement 'chain'(read; a bunch of crappy off-price stores selling sh*tty factory seconds from Chinese sweatshops) says that the Boston flagship will re-open in Spring 2009. Frankly, I have my doubts. But even if they do, it is sure to be a pale imitation of the original. I'm sorry, but as far as I'm concerned, any place called 'Filene's Basement' should have 10 stories of a place called 'Filene's' above it. This poor old (dare I say) institution died the day they locked the doors and tore the building apart.

R.I.P. Filene's Basement. Here in Boston, I'm going to miss hunting through your heaped and disorganized racks in search of a $600 pair of slacks that have somehow been marked down to $16. You were a part of the fabric of this town, Old Girl, and you will be missed.

p.s. I invite anyone who ever experienced this one-of-a-kind place to share the stories of your greatest finds with us.

Top gets: $300 Canali dress shirt for $40, $150 Ralph Lauren dress shirt for $20. A whole collection of Italian wool $150+ ties for $25-$50. But hey, at least the Boylston Street location is still open, where one can get a cherry-red heavily embroidered Calvin Klein sport shirt made in Sri Lanka for $45.

I never shopped at the original Filene's, but I am shocked that Boston would allow for the beautiful facade of the building to be torn down.

For a city that is so tied to its history, it really surprises me that they would let that building facade be demolished.

the facade is still there...its the guts that are gone

Not only the guts, but the heart and soul are gone forever.