People with kids are always going on about how they need a huge car, now that they have the kids. It's as though no car is huge enough. Frankly, I just don't get it. From April until it gets too cold or too wet (or both) a bike (an old one at that) serves as primary transportation for me and the boy. 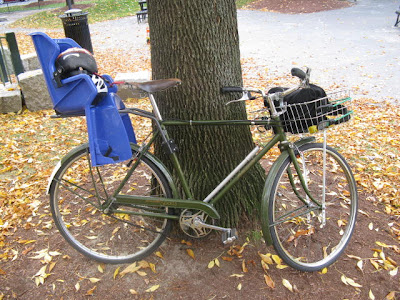 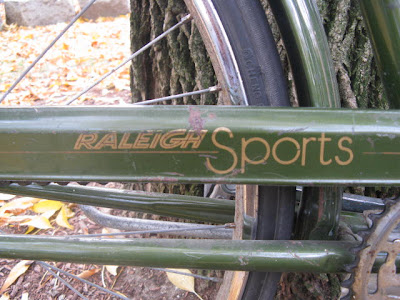 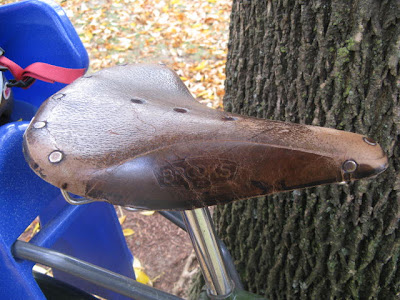 I purchased this bike and it's companion ladies bike last year for $120. In the same amount of time, three tanks of gas cost as much. But I don't do it to be 'green' or self righteous or anything like that. I do it because it's fun and the boy likes it. I know there are those of you who say "That's great if you don't have anything to carry.", but know that on the way home after this picture was taken I added two full bags of groceries to my load with no trouble at all.

Plus, I, unlike many people, am not one to carry a houseload of junk around just to take a 2 year old kid to the park for a couple of hours (that's another post). 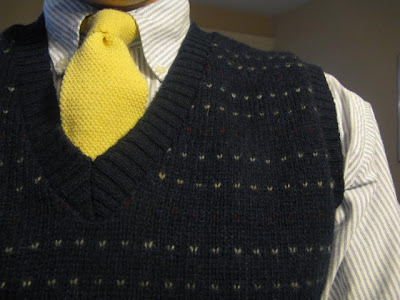 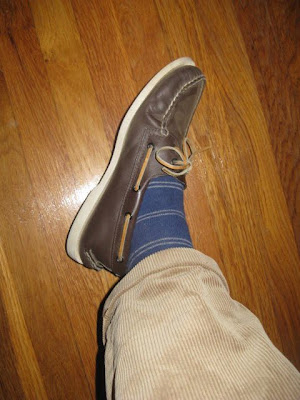 ...is not only perfect for the Autumn weather which has finally arrived(read, no more sweating in a long sleeved shirt at the end of October), but it goes much better with a British commuter bike than it does with a 2003 Honda Civic, don't you think?

I love the yellow knit tie!

Because of you, I am once again inspired to go thrift shopping with the hopes of finding gems. The trouble is, I am not very patient and can get disappointed and discouraged easily:(

However, I will go to a large store in Toronto Monday.

I think you might enjoy seeing the Lake Pepin, MN 3 speed Tour for the Gentleman Cyclist. Everyone dresses appropriately--there's a dress code, including the impossible to find Norfolk jacket.

Us women are welcome to ride, too, but I don't think we have a written dress code.