Back from The Cleaners, part 2

As I mentioned in an earlier post, I recently brought my Barbour jacket in for reconditioning. Today I got it back from servicing. You wouldn't think that merely picking up your coat at the cleaners, which is effectively what I did, would be such a big deal, but in a way it was. The salesman was polite and called me 'Sir'. When he brought my coat out from the backroom, he asked whether I wouldn't like to wear it out, as it was bit chilly today. When I said yes, he held it open and helped me into it. I almost burst into tears. No-one ever treats me like a gentleman. 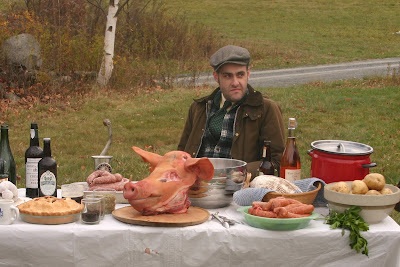 the Barbour in action
So I found this picture of myself being a gentleman in my Barbour coat, that is sitting outside in the countryside drinking British beer in front of a table festooned with freshly made sausages and the head of a pig. (yes, that's really a pigs head. It's a long story best saved for another post.) I wish I could remember what prompted the aloof scowl on my face. I'd like to think of something romantic, but it was probably just the smell coming off of that table.
Posted by Giuseppe at 7:39 PM

I enjoy reading your blog. Please keep it up. Your thrift store finds are spectacular.

Thanks for the kind words.