House and Home: The Dining Set

Today marked the completion of a project that I've been thinking about since September. In my quest to rid the house of much of it's Ikea (mentioned previously here), I had recently been turning my sites to the dining room. Our kitchen is extremely small, so we actually eat in the dining room quite a lot. I like that. Many people with apartments like ours keep a computer in the dining room, or use it as a living room and use the living room as a bedroom, but, to be frank, I always thought that was kind of crappy...fine for a college flop house, but not for a young family of four.

So, we've had this chair forever, but it's a bit worse for the wear. Recently, it was down in the basement beside the table where I built my architecture models: 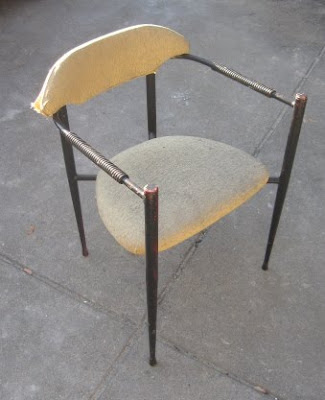 Living in a college town, the first weekend of September is like a trash picking holiday. You can't believe some of the stuff people leave on the sidewalk when they move. I'll admit it, this year I was crappy enough myself to drive around on trash night looking for treasure. I found this chair, probably late 1960's vintage. I liked it, I took it home, but I had no specific use for it. 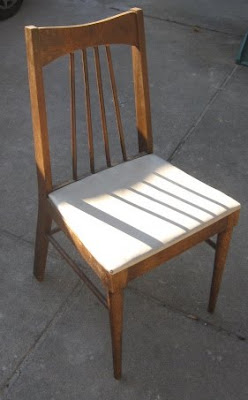 Then I had an idea. Being home with the kids in the day-time, and an artsy-crafty type, I came up with a plan. I bought these two chairs for five bucks each at the big thrift store with the furniture warehouse in back: 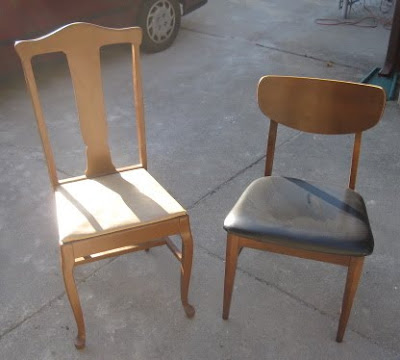 Then I took off the seats and sanded them down. We had a bit of "Indian Summer" this weekend, temps in the seventies, which is good since sanding old furniture is best done in the yard, wearing a t-shirt. Mrs. G. and Mom took the kids out all day Sunday, and I got to work, using my Dad's electric sander...still new in the box. It's funny, my Dad is the least handy guy on Earth, but he buys all of these power tools, and then never uses them. I think he does it unconsciously knowing that I'll appropriate them when the need presents itself.

Mrs. G. likes to sew. In her fabric box, I found this beautiful piece of wool in a black and white hounds tooth check. She purchased it years ago, but never found a use for it. It would have made a hell of a sports jacket.I appropriated that, too.

My Mom had this idea years ago that she would re-upholster her dining room chairs. She went out and bought foam and cushion batting, then five years later just bought a new set of furniture instead. I appropriated these supplies as well.

And I bought a can of high gloss oil based black paint and a new brush from the hardware store.

The end result is pretty damn sharp, if I do say so myself: 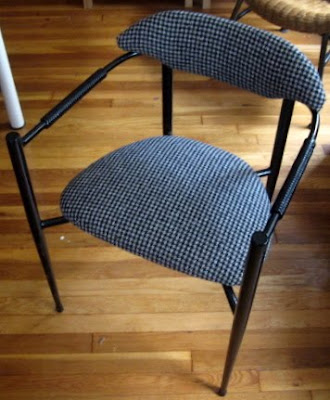 This chair was the most challenging, being the only one with a cushioned back. 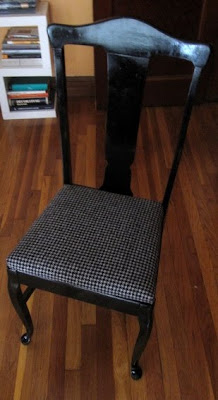 I call this one "the New England" 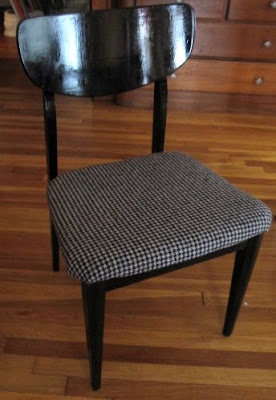 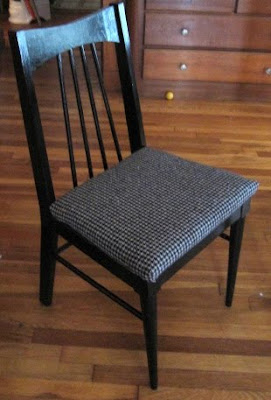 And this one ain't bad for the garbage. 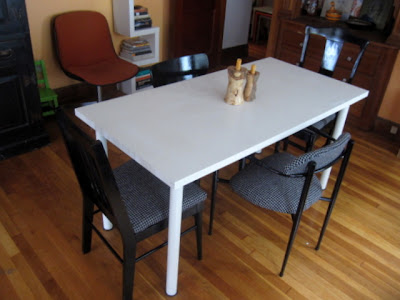 Taken all together, with the white Formica table,they make a nice matched/not matched set, don't you think?

Mrs. G. is talking about making black and white tie-dyed canvas curtains to complete the look. I'm all for it.

Sum total for chairs plus supplies: $30

Good job! I found the two most amazing wood panels, about 6+ x 2' at the place our 'hood uses for recycling. They're in an open grid. They need to be cleaned and sanded - someone had a heavy hand with the varnish, but they'd make a great accent.

Eating should be done in the dinning room.

Always have a sitdown family dinner with some fruit, cheese and wine for desert.

I like it! I think the mismatched look is very artistic, almost like the chair would correspond to the personality that sits in it, but the same color and pattern ties it all together, rather like a family.

That rocks..love the houndstooth...love the black painted look...really love the fact you were able to take all those disparate elements and tie'em together!
Bravo!

Gotta say that I really enjoy your House and Home posts, keep them coming!

I love it! I realize this post is 3.5 years old. But still. Great one!