Turn It Up, Then Take It Down a Notch

For many men, dressing well is a matter of turning it up. It certainly is for me. In nearly every given situation I can think of, I'm likely to be dressed in a way that is turned up five notches from the average level. I wear a coat and tie to my job, where the accepted dress code is jeans. I dress the same way for trips into the city. I prefer shoes to sneakers, and when I do wear those they're of the understated cloth variety. While I do wear jeans or shorts at the playground, I see to it that they are clean and crisp, and I always wear a shirt with a collar. This isn't meant to be bragging, far from it. Indeed, if anything, this assures that I will be the weird guy sticking out like a sore thumb nearly everywhere I go. And yet, for all this, I rarely get to wear a suit.

I did find an excuse to don one recently, at a big public event at my job. The memo to staff that went out a few days before specified "business casual" for the floor staff. Since my day to day dress is in fact what might be considered business casual in the first place, and since the idea was to get everyone a little gussied up for the occasion, I decided to turn it up one and opted for the full navy suit (J.Press, $7.99).  When wearing a suit for something other than office business, especially a navy one, it helps to turn things down a bit in the appointments, softening the look of the suit and taking some of the stuffiness out of it. Few things shout "board meeting" like a navy suit with black shoes, a white shirt and a simple burgundy tie. Avoid the white shirt and black leather, and the whole mood can change. 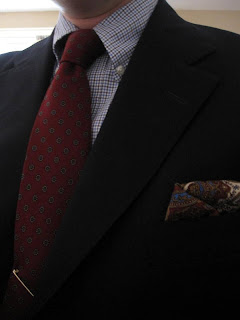 In this case, I opted for a shirt in blue and black mini tattersall check with button down collar by Brooks Brothers ($5.49).  I did stick with the understated burgundy tie, but opted for wool over silk (Fitzgerald's of Grand Rapids, $1.99). Much like the check pattern and button down collar of the shirt, the soft, matte wool tie helps keep things leaning toward casual, imminently appropriate for an afternoon event. The pocket square in rich paisley rather than crisp white follows suit. 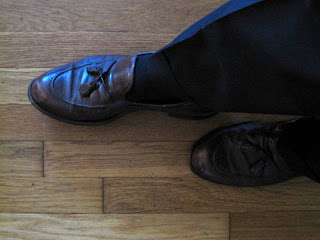 Brown shoes instead of black, loafers instead of lace ups. Two rules violated, but this also follows the theme of the business suit in the non business setting. Popping socks would have been too much here, so simple navy is the best bet. 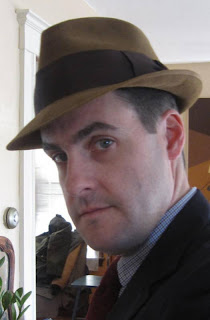 Wearing a brown hat with a navy suit may in fact be grounds for termination, but I can dig it. Besides, it's all I can do not to wear this hat in the shower since I had it refurbished, and you have been asking for an "action shot". Pay no attention to that heap of clothes on the chair in the background. I do run a clothing store out of my house, you know, and things have a way of encroaching on the living space. Ask Mrs. G. 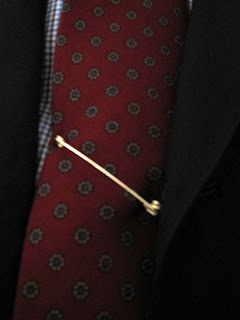 Collar pin as tie pin is a nice trick on a wool tie. Don't try this on silk as the holes will never come out. But on wool, they'll close up, maybe with a nudge from a little steam. This little detail was likely one step too far, it's true, but I can only suppress my naturally garish inclinations so much in one ensemble.

If you've got a navy blue suit sitting in the closet that was worn to some interview long ago, and you don't have a "suit job", and nobodies dying or getting married anytime soon, dust it off and try it out with some softer, more well worn accoutrements, just because you can. You may find in that navy suit a new old friend you never knew you had.

I've followed your blog for quite some time, and while I have thoroughly enjoyed your taste and your finds,I've never made a comment.

But I had to tell you that in this suit you look like a MAN. Not a boy, not a dude, not a guy - a man. It is so rare to see that quality these days.

You made my day with the way you look in that suit. Thank you.

(For the record I am a woman, and I also practice "affordable wardrobe" shopping.)

Completely agree; I quite often wear chocolate suede shoes with a navy suit to meetings, even in London, though for a meeting with investors or potential investors I think I might stick to black calf.

A far worse sartorial crime is to wear black leather shoes with denim jeans or with chinos, but maybe this is confined to the UK. Horrible, anyway.

This may be your best ensemble yet. Sharp!

G, you look like you're out of the old days, and you wear it well. By the old days, I mean the time when men used to actually dress like men (suits, buttoned shirts, brogues, fedoras). Well done sir, well done indeed.

I'm enjoying the blog, and your point of view, but for me the hat makes me think "in costume for a play", and not "well dressed". It is a shame, as I like hats in concept, but on anyone under 70 years old, it doesn't really seem to work. The rest of the look is right on in my book, even if others aren't wearing suits.

And I couldn't agree more with the first commenter: you look like a man. A real man. A serious adult man. A man to be reckoned with.

I bet people even called you "sir" when you went out dressed like that.

This, I believe, is part of why the Marxists who led the Cultural Revolution of the 1960s eschewed not just hats but suits and ties as well: men dressed like this are elevated to a level of dignity and authority that men in casual clothes simply cannot attain. Since not all men were "privileged"* to be able to dress like this, it was deemed "unfair," so all men had to be brought down to the lowest common denominator. If everyone dresses like a slob, then no one has "unfair" authority (prime example here--scroll down to see a bunch of schleps!).

*If some are "privileged," then the assumption is that someone is actively denying the "underprivileged" of the rights and opportunities that ought to be theirs--more Marxist class warfare rhetoric. Nonsense, I know, but it seems appropriate to mention this, given what's going on outside the men's fashion blogosphere these days.

To each there own.

I think the hat suits you and I think you look fine, not in costume. How else are hats gonna make a comeback if every man who wears one gets accused of being in costume? I enjoy your blog.

Love the Fitzgerald's Tie. Thats one of the old (defunct) department stores back in my hometown.

All Killer No Filler.

It's funny, I'm pretty much a political lefty, maybe even with a Marxist streak. But I always thought it would be better for the "lower" people, of which I actually am one, to bring themselves up, not the other way around.

It's true, every one can't be "priveleged" enough to afford these things, but isn't that part and parcel of this blogs core premise?

So in the end, how was the outfit received at the event by your colleagues/guests?

"Hat makes the man," they used to say. Within living memory, a man wasn't considered dressed to go outside unless he had a hat on.

Hats also make the wearer look taller--a plus for those of us who are, shall we say, vertically challenged.

Anonymous 3:24 hit it on the nose: the only way to bring back hats is for people to wear them. Now, some hats are so hopelessly outdated that it's almost impossible to wear them, such as the bowler and the boater. However, the fedora and its cousins were the last ones to be worn regularly with suits & ties, so are the least costumey of the bunch. Plus, the fedora flatters nearly everyone (did you know it was originally a woman's hat?).

So thank you, G, for showing us how good a man can look in a fedora!

(Says the man who wears one everyday.)

Your left coast alter ego, A Suitable Ward., makes the same point quite often: a casual suit, or a suit casually rather than the "odd jacket" is a nice variation.

That would be his nemesis, not his alter ego.

I love both Wardrobes. I get inspiration from the Suitable one, but I live the Affordable one.

Trust Young Fogey to make an uniformed observation about "The Marxists". On the contrary, in the 1930s heyday the aim was to make everything, including good clothes, affordable to all. Cocking a snook at the men who thought you were a rabble unless you paid three-years salary for a suit from the Row.

In the 1930s most people were well-dressed, including "the Marxists" and "the Anarchists", mainly because jackets, ties and wool were what people wore and little else was available. It's cheap and weak to invoke the adoption of the military uniform by some people as evidence of 'what the Marxists want' to bring everyone down to "the common denominator". Lenin's use of the 'worker uniform' was a show of solidarity (steel workers wear practical clothes), most of the time he dressed impeccably. Steel workers too perhaps when not working.

My advice to you is to comment about clothes here and save cartoon-politics quips for places like the Fox News website. To be able to discuss serious left-wing political ideals, you have to know them beyond a caricature.