A guy can't wear striped ties all the time. Sometimes, you gotta stretch out and get a little weird. And so we have the patch paisley:

Sure , it's more than a little strange. It's even quite possible that it's downright ugly. But I have a feeling about this one, just like I did about the plaid pants...or maybe I'm just losing my grip. Who knows. 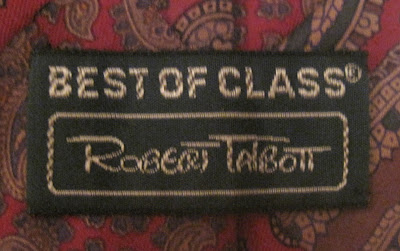 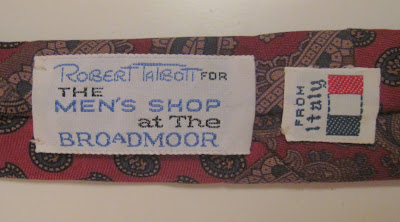 From Italy, no less...even fancier. Antbody know anything about "the Men's Shop at Broadmoor"? $2.99

I didn't find this tie so much as it found me.

I like to take the kids to Castle Island. It's one of my favorite places in Boston and we visit frequently in the Summer. Last week, I took them there on a bleary, damp, windy day. I was at a loss for what to do for the afternoon and I figured it might be fun for the boy to see what the beach looks like when it isn't packed with people in bathing suits eating hot dogs. It was cold and desolate, but we had a picnic in the car and then watched the ships and planes coming and going, and the boy was fascinated by the sight of an active and foamy sea.

Afterwards, I visited a nearby thrift shop that we don't get to that often. I wasn't there five minutes before the girl began to fuss for her milk, and the boy, ever the sympathetic brother, began to wail and nash his teeth in response. On my way out, as I passed the tie and belt rack, this little number caught my eye. Barely lloking, I grabbed it, payed, and rushed to the car to feed the girl. It wasn't until I got home that I even realized it was Robert Talbott.

Someday, I think I'll just wander into one of these places blindfolded and see waht turms up.

The bad: Yes, the tie's ugly. Wearing it with just a shirt, slacks, and jacket will probably scare children and puppies.

The good: It's going to look PERFECT under a dark green sweater vest and a tweed jacket this fall.

IMO, these kinds of ties achieve their best look the same way pocket squares do-- just a bit peeking out to add that perfect finishing touch.

The Broadmoor Hotel has been in Colorado Springs, CO since 1891.

Robert Talbott has been in Carmel, CA since 1950.

I enjoy your blog. FYI, the Broadmoor is a very upscale resort in Colorado Springs, CO.

I don't want to be unkind, so I'll just say that patch anything is not my cup of tea. In the tie's defense, since it's all red-based patterns (I see paisley, foulard, and rococo stripes), it is less, shall we say, strident, than your patch madras pants.

Wear it in good health!

And to think that under your influence, I just bought (and am wearing today) an Irish poplin (50/50 wool/silk) tie: dark navy with thin red stripes and red, yellow, & silver shields, all for the princely sum of 50 cents.

I hope your influence only goes so far! ;-)

very cool tie. I have been to Castle Island and went inside. Lots of soccer games going on

I enjoyed this post, musing over what was the tie's history and how it found its way from the famed Broadmoor of Colorado Springs to a Boston thrift shop.

When it comes to finding enduring quality, I appreciate your ability to choose it without relying on the label.

The Broadmoor was and is a classy hotel in Colorado Springs. There is still a Men's Shop there.

Beautiful tie. I like you shop off season. Stopped to donate a few household items to the local thrift shop
in the resort town I live in today and walked out
with a viyella tattersal shirt and a pair of Tingley
storm rubbers for a grand total of 5.25. Both are
in great shape.

I can see it with a blue shirt and a grey herringbone tweed jacket. Cool tie.

I find that some of my best scores are found 'on the fly' like this! Congrats on your find!

I have this same tie!

Broadmoor is a hospital for the criminally insane, I believe.