House and Home- The Drunkard's Pair

We have a lot of single nice drinking glasses at the house. Most of them began their lives as sets, or at least pairs, but due to clumsiness have wound up solo. The clumsiness is frequently mine, but since I usually commit it in the act of washing dishes, we'll chalk it up to a charming character flaw. As usual, thrift shopping plays a role, because it's never that heartbreaking to lose something that cost less than a buck.

Here are some of my favorites: 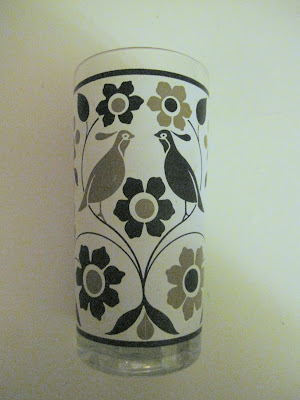 A nice ten ounce highball glass. I bought two of these, $0.59 each. No great loss, but I do miss heading out to the back yard on a hot day with a pair of icy cold rum lemonades for the Mrs. and myself in matching glassware. 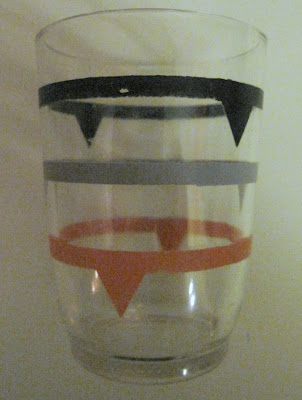 This one I actually bought solo, but I suspect it had three siblings and a matching pitcher once upon a time. It's a small one, only about six ounces. Filled to the black line it's my favorite glass for cheap Italian wine, while the orange line represents the perfect measure for an occasional whiskey. Sometimes Mrs. G. lets the boy drink juice out of this glass in the morning, and I resist the urge to get all possessive about "Daddy's cup". Makes me want to keep it on top of the fridge, unwashed except for being wiped with a paper towel, next to a half gallon of Seagram's V.O. 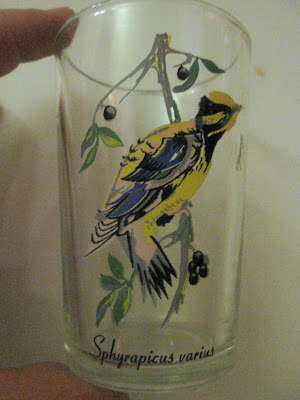 I think we had four of these once. I can't remember, but I'm pretty sure they all had different birds on them. No matter, the one survivor bears the Sphyrapicus Varius, or Yellow Bellied Sap Sucker, which makes this also an excellent whiskey cup. 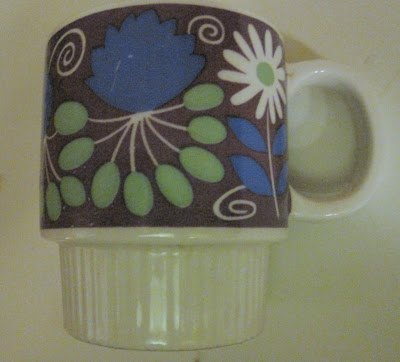 And after a night of drinking like a sphyrapicus varius, you'll need something to drink your coffee from. We had four of these once, too. That indentation at the bottom was the perfect line to fill the cup with milk and sugar, then coffee to the top.

It's a good thing we have small kids, and as such are not in the habit of having guests in the evening for cocktails. Really, the horror of something so gauche as unmatched glassware is more than any respectable host could bear!

In the old days, when I worked in a junk shop (not a thrift store, a downright junk shop) we were always getting three of things. Some people would only buy two, but I always bought all three. I called it a "drunkard's pair", because you could get drunk and break one and still have a set.

Now if only I could come up with a clever name for the last glass standing.

Actually, given the familiar effects of drink on vision, "Drunkard's Pair" could be the tag for a single glass. Too bad that's taken.

I nominate "The Old Soldier" as the name for the last glass.

I thought you already came up with it: "The Last Glass Standing."

do you own any pint glasses sir? I am interested in seeing yours