It's "Back to School" time, and weather you're in school or not, it's a good time of year to work a subtle dose of something I call "algebra teacher chic" into your sartorial rotation. You know the look: rumpled cotton pants and plaid sport shirts worn with ties. Just be sure to do it artfully, and avoid the chalk dust stain on your shirt sleeve and the government issue glasses. 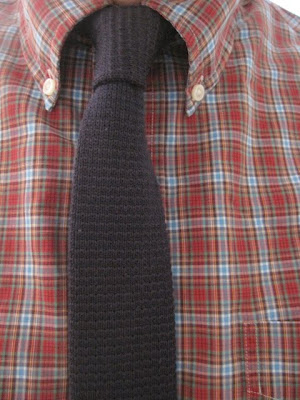 If you haven't tried it before, wearing a tie with a shirt in rich plaid can be a tricky task. Start simple by pairing it with a solid knit tie, in cotton or wool, in a color that works well with every color in the shirt's plaid. 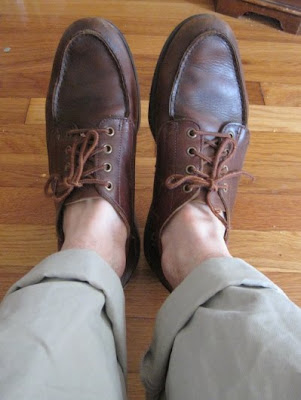 Keep it simple with plain khaki pants. Olive green and shades of grey work well here too. With Summer at an end, the Sperry Topsider has been replaced by the blucher moc as the shoe of choice on days still warm enough for going sockless. I always considered these shoes to be kind of cool weather boat shoe, anyway.

When you feel as though you might be getting the knack of it, go ahead and zest it up a bit. Try a bold plaid shirt with a patterned tie, and for good measure some bright socks, to remind you of the fact that though the evenings may be on the cool side, the sun is still shining bright and clear. As always, keep the whole thing from getting out of control with larger neutral items. The ubiquitous khakis, the olive of the Barbour jacket, and the tan cap play a crucial supporting role in making sense out of all this. 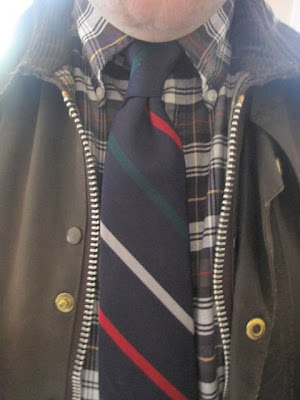 Pattern mixing ain't easy. Remember, keep the color palette similar, but vary the scale. That's the trick. Here, the plaid is very dense, where the tie has a lot of space between it's stripes. The navy blue ground holds things down, while the stripes echo the minor colors in the plaid. The red socks carry the punch down to the bottom, making for a more cohesive head to toe look.

Such combinations are more than a little bold, but don't be afraid. And expect to fail...a lot. For as often as I've pulled this kind of thing off I've left the house looking a bit foolish. But as with anything, practice makes perfect. The more you attempt it, the better of an eye you'll get for it.

Who knew that the kind of creepy childless guy with the comb-over haircut who tried to convince you that math could be done with letters instead of numbers had so much style? 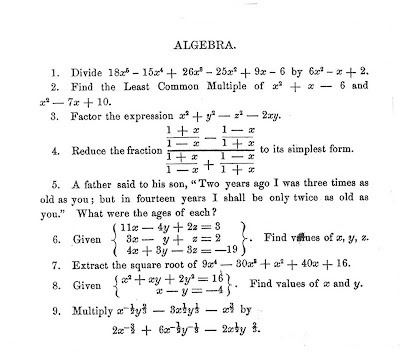 I like the plaid shirt and knit tie combo, and first sported it myself in 1983. (And like a fool, got rid of the tie!) It's a great fall look.

Great suggestions for mixing patterns. More thoughts on the subject at Permanent Style. (Your nemesis has also mentioned the subject.)

Look does not work with dark plaid, makes you look like a poor English gamekeeper. Tatersall is is the required shirt with light background. Just look at the Barbour catalogue for the 411. Dark shirts with a tie is never a good idea.

Hitting the gym is not a reasonable thing to expect of someone with small children, says the voice of experience. A much easier way to shed some excess weight is to add a little "extra" exercise to one's day: some pushups here, some sit-ups there, and a doorjam pullup bar for good measure. Then, regardless of what you feed the kids, salad for dinner! I've lost 10 pounds and am still slimming on this simple regimen.

I don't know what you are talking about Jack. He looks cute with his little tummy. No matter what his weight is, he will always be the snappiest dressed blogger.

If you don't want to join a gym take a daily walk. The outfit looks very uncomfortable.

This is a look I go to a lot in the fall and winter. I have a friend at work who always says "substitute teacher?" when I do. The knit tie really works well with plaid. I'm never wear a patterned tie with a patterned shirt.

Those shoes are great too. What kind are they? Most blucher mocs seem a little slipper-like to me. Those look like real shoes.

Hey Geese,the ONLY time I leave my apt. feeling 100% comfortable with what I'm wearing is also the time I'm playing it 'safe',which should never be attempted,as one could hurt oneself....

Don't forget about my grey hairs and the chip on my front tooth.

The shoes are Sebago "Campsides". And you're right, they are more of a pair of real shoes.

Senore,
I also have grey hairs and a chipped front tooth. All earned with blood, sweat and tears. I enjoy your musings very much.

Gray hair on a man is great! It makes us look mature, distinguished, even suave. I love my gray hair, and enjoy its effects on my mien.

Who cares about the Grey hair and chipped tooth.

At 45 years old I became a father for the first time, which really puts you in touch with your mortality. Getting a complete physical with a top doctor and joining the Gym was the best thing I have ever done. Another goal was to dress better, that is how I found your blog.

It's cool to see this in action, I am liking the plaid shirts with the more plain tie. Someone just commissioned me to make them a gray flannel bow tie. I didn't really get it at first, but now I'm starting to see a fun way it can be used. I'm thinking of adding it to my shop. What do you think?

Before I joined LA Fitness two years ago I weighed 177 lbs and the last time I weighed myself I weighed just shy of 200 lbs (and it wasn't muscle). Did anyone see the recent coverstory on Time about exercising not being that effective at helping one lose weight? I know I'm losing weight now because my clothes fit better. What seems to be working for me is to eat healthy, cut out alcohol, and cut down on eating out. I'm frequenting farmers' markets and buying lots of seasonal fruit from area farms. So far, it's been a help.

Well, I guess it's time for me to get back to the gym for me, too. I broke my rule about not eating out (I did it twice today) and about not drinking (two glasses of wine at dinner) to keep the weight off. Anyhow, at the end of my physical my doctor told me that he wants me to drop some weight and to start exercising on a regular basis. As he put it, since I am between jobs right now, I have all the time in the world to work out. Rats!