Firstly, my apologies to those of you who have been showing up to find nothing new here all week. A fella needs a break sometimes.

You may remember some time back the Young Fogey and I swapped some rags, by which I acquired an amazing Tartan suit by Pendleton. Believe me, I have been absolutely dying to trot this one out. With the alterations finally complete and a friends Christmas party last night, I finally had my chance. Get ready, it's a doozy:

Oddly enough, I find this suit wasn't as shocking to wear as I would have thought. Sure, it's pushy, but the cloth is generally dark and its well cut, so mostly it comes off as a nice suit. The thing is warm, too. 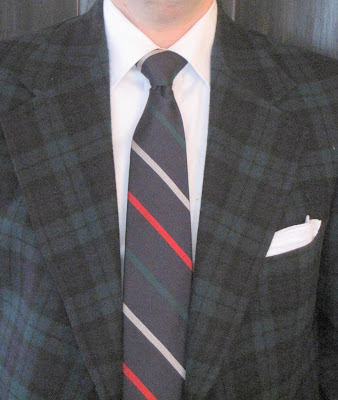 Being from the 1970's, the lapels are just a bit on the wide side. Instead of my usual button down collar and four in hand knot, I chose to balance out the width of the lapels and the thickness of the cloth with a spread collar and Windsor knot. It is a little tricky putting a tie with this number, but I think this one worked pretty good. I may be wrong, but I think the Black Watch actually has a regimental stripe similar to this. Besides, the stripes are green, white and red...Christmas-y, and Italian, a double whammy! 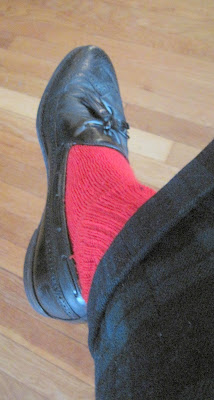 Down below, red wool socks (what else?) and tassel loafers. Now, if only I had a top hat with a holly sprig stuck in the band.... 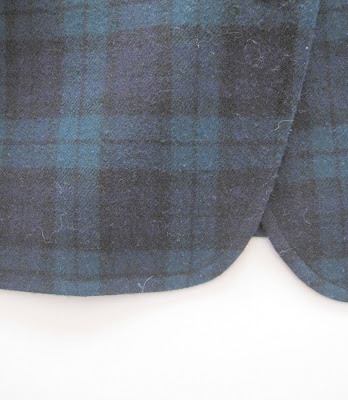 This one did require some surgery, so in true Giuseppe fashion I decided to spend a small bundle on the most impractical thing in the closet. The jacket skirt was a bit longer than I like to wear them, so I had it shortened by an inch, along with the sleeves. My buddy the old Vietnamese tailor really knows his craft. You'd never even know it had been worked on.Check out the curve at the edge...it's perfect. 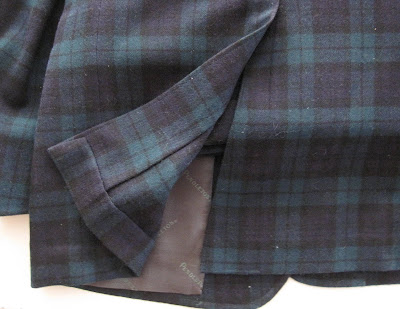 Shortening jackets is tricky. There are a lot of little things to remember. For instance, shortening a jacket means the rear vent will also be shortened, often requiring that the vent be altered too to keep the proportions right. This suit, being from the 70's, had an especially deep vent to start with, so that wasn't a problem. 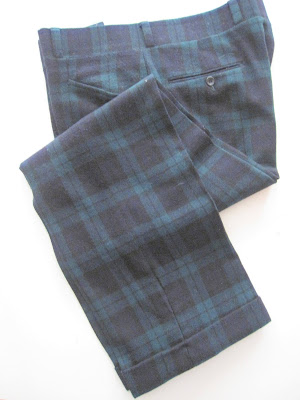 The pants had some flare to them, but I decided to perform that bit of surgery myself. I tapered the legs in an inch, starting just below the knee. I'm no expert, but I think they came out pretty good. If your going to try something like this at home, work with plaid. The grid makes it easy to get your lines straight.

It will probably be a year before I wear this suit again, but that's just fine. The pants alone will work great with a cardigan or a white cable knit pullover, and that jackets gonna be swell with some grey flannels or a pair of jeans.

Thanks Young Fogey for sending this one to a loving home. I'm sure you'll agree, it would have been a crime to break this one up.

Can one get the lapels altered on a suit? Also, you should profile your tailor seeing as he's the man behind the curtains.

I've been thinking about doing a piece on my local tailor. I just need to muster the courage to ask his wife to let me take pictures in the shop.

Those pants have top pockets. That just takes the ridiculousness of that suit to a whole new level. I like.

Lapels can be altered. It's usually a pain, but I'm sure Giuseppe's tailor could handle it.

This thing looks wicked awesome. Every inch looks perfectly tailored to fit you. In other news, I'm starting up my own blog, thanks to the influences of guys like you, ADG and Conor. Any suggestions for the first post? I'll link you as soon as it's up!

Have to say that I love the suit! Not only is it the perfect Christmas suit but the separate pieces (especially the jacket) are very versatile pieces. I have looked at a few charity shop jackets like that but no full suits ... you are a lucky man!

Btw, would love to see a feature on the tailor ... about to move to the DC area and will need to find a new tailor.

I've been buying a bit of Pendleton myself. Just wore the latest acquisition (a skirt) on Sunday and featured it on thriftystyleatsixty.

A plaid jacked was/is more problematic. Great looking on the hanger. Unusual, rounded collar in the back, but longer than I like to wear. Emboldened by your action, I may consider having IT shortened (if I can find myself a similarly good tailor)!

You WERE missed, by the way!

Balling out of control. A million billion stars.

Now you're the proud owner of TWO black watch sportcoats. One too many, or just right?

I'm so happy that the suit has a good home. It's better than the vivisection I had planned for it--and I got the Pendleton made-in-America Black Watch vest I really wanted (and am getting good use of). A true win-win trade.

I think you look fantastic in your new togs. Have you considered a red bow tie with the jacket? I think it'd be the bee's knees.

Straight Hot. You pulled it off with a plumb.

One too many. I'll need to find a good home for the other one.

Thanks again, I love this thing.

I'm absolutely gobsmacked that I think this, but the socks actually work perfectly.

I've been eBaying for black watch for the last couple weeks without success, so if you happen to be a 40R, well... I might be able to provide a loving home.

Having just now found out that you can take lapels in on a suit, I would do that. But that is my only qualm.

Can you put up the name/address of your tailor? I've been trying to find a good one in the Boston area for a while now. Thanks.

Here is a cool Pendleton suit, 44R on Ebay
http://cgi.ebay.com/Pendleton-Red-Green-Black-Yellow-Plaid-Blazer-44-R_W0QQitemZ270498445019QQcmdZViewItemQQptZUS_CSA_MC_Suits?hash=item3efaf6b6db

I love your blog.

That's a beautiful occasional suit, especially for Christmas. I'm curious if you got a quote (or ever have for any jacket) for having the lapels narrowed, and if such surgery is even possible. My only gripe with the suit is the lapels, and maybe the length of the jacket flaps, give it a slightly '70s look.

I don't mean to offend you, but I'm mainly posting to ask about the fact that I can see your belt buckle between your jacket and pants in almost any photo you post. (Please understand that this isn't a comment on your weight, not that you look overweight to me anyway; it's about the fit of your clothes.) To me, this is a fundamental sartorial sin on par with short socks or short sleeves with a tie. I love thrift stores. But, contrary to the point of your blog, such photos scream to me "Don't thrift because nothing you buy will ever fit correctly!" I don't know if you wear your pants too low, or if it's the button stance of your jackets, or if some of your jackets are too tight, or what. Maybe it would help to switch to suspenders with suits, which everyone should do anyway? Again, please understand that I don't mean to offend; I'm just genuinely curious what you think about this.

I do tend to wear my pants a bit low on the waist.

While the contemporary sensibility of style would indicate, even excepting the web empowered freelance aesthetes, that the wide lapel is decidedly 'ringard', the look can be amusingly applied with an older style shirt, perhaps with a round, pin or even a tab collar better suited to the pre-war look.

If anyone could sort about and perhaps even achieve the look it might be the keeper of this blog. That so many might confuse or deride the style with a Saturday Night Fever or Bee Gees related quip, speaks more to their own limited sartorial knowledge which seems incapable of anything other than negation.

I wore this suit with silk bow tie last Sunday to lunch, on the street, and then to the local dept store for the kids visit to Santa.

THREE people came up to me on separate occasions during the afternoon to comment "nice suit"; that was weird I thought.

seeing your photo gives me a good idea on what they were seeing.

good blog. BTW I bought the blazer and pants as separates on ebay and they match perfectly.

If some little kids come up to me and said Nice Suit I'd kick their asses then their Dada ass then I'd think F--K what do I look like?!!
Kids like things that are weird and you gotta da weird on yer back G.Thats an honest comment

I am jealous! I would suggest a red tie, something with a character print would be nice - needs the added punch IMHO. Leave the lapels the width they are, looks great!

wow; they must be really, really heavy; are they made out of lead or something?

Ethel is a broads name? whatever?

Most of us have the unfortunate habit, acquired through wearing jeans, of wearing our pants low on the hips, rather than up on the waist. This naturally results in a bit of tie, or shirt, or belt buckle being visible. I agree that it is not ideal. If you watch old(er) movies, you'll see men's pants worn much, much higher than they are now, and when the jacket is buttoned, it makes for a neat, clean, unbroken look--the look a suit is supposed to have.

The solution is to wear your pants up at the natural waist--but no modern pants are cut to fit this way! The only way to do it is either go vintage (1950s or earlier) or tailor made. Failing those two options, we have to suffer with modern low-cut pants.

You're welcome. May you wear it health for years to come!

Very Duke of Windsorish....try it with a bow tie.