Yesterday I got an email from the Used Book Superstore announcing that records were 50 cents each. Seriously, if you live around here and you like to read and you haven't been to the Superstore, I feel sorry for you. Anyway, I picked up sixteen new/old slabs of wax, but this one alone was well worth the $8.00 I spent: 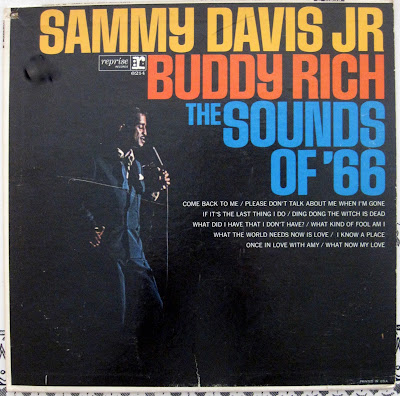 There's little doubt in my ind that Sammy was the gem of the Rat Pack. Forgive me, Frankie and Dino, but Sammy was the Jam. What could be better? How about if he was backed by the Buddy Rich band of 1966? C'mon, seriously... 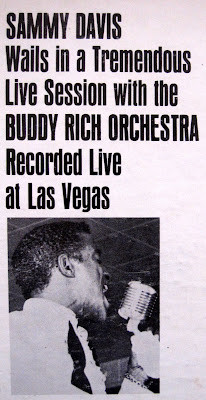 As if that weren't enough, how about we record it live in Vegas? Musically, this record is great, high rollin' Vegas swing at its best. But more than that, it's a stunning snapshot of a much-mythologized moment in American history. Guys like Michael Buble may think they can still do this sort of thing now, but they can't. Why? Because they ain't Sammy, Buddy ain't playing the drums, and 1966 was a long time ago. That may be a vague and somewhat lame explanation, but I just don't know how else to put it, dig?

A while back, I was in this sort of far-out, avant garde art band. We wore nice clothes, and played the best vintage gear. Our songs were written with a real love and knowledge of the best of what had come before us. But it was our mission to get loud and 'savage your face', as we used to say. We also liked to pull weird p.r. stunts. One of our favorites was the 'secret show'. We would invite a select group to our tiny, stinky, but oh-so-hip practice space, usually late night after some other cool public happening, and rip it up. People would practically be on top of us, smoking and drinking. It was great, and I count those among the best performances of my musical life.

Seems Sammy had the same idea. From the liner notes:

Can you imagine, a band like this at the Sands lounge, the small, intimate room, starting at 2:30 in the morning? Las Vegas just ain't what she used to be. That after hours crowd was no doubt full of evening gowns and tuxedos, the room stinky of regular Scotch, no fancy mamby pamby single malts, just J&B, or even Ballantine's Finest, and smoke, no fancy mamby pamby cigars, just Lucky Strikes, Camels ( the knid with no filters), and L&Ms (for the ladies). Apparently, they even had the same idea about 'savaging faces' that we had. Again from the liner notes: 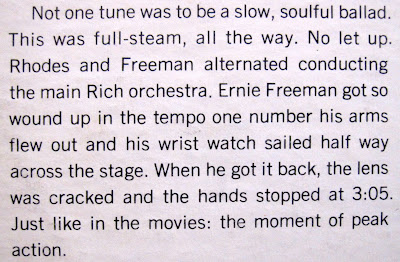 The moment of peak action?!?! These days you can't buy a phrase like that. Best part is, the record is as hot as it looks. Swinging Vegas turns costume cliche real quick, but not when its this good. I think this recording offers a real glimpse of what it was like. No string sections, no slick production, just a hot band bashing out the tunes, Sammy Davis gettin' dirty, and a room full of well dressed, high ticket drunks in the small hours. Historic, and highly recommended...if you can find it. Good luck.

I leave you with this. At least ten years later and clad in polyester, but seriously, these two are an unstoppable force together:

p.s. what ever happened to showmanship?
Posted by Giuseppe at 12:37 PM

I've checked out a few of your previous recommendations and you've never steered me wrong. I can't wait to track this one down somehow.

Spot on! Buble schluble, my foot.

Love this record. Saw Frank, Dean and Sammy on their late-'80s tour (a little band of punk rockers in a sea of navy blue power suits and red dresses -- but they were all quite nice to us) and Sammy, despite having had hip surgery, tore the place up.

I can't even articulate the kind of talent Sammy Davis Jr. had. You can't learn it, you're born with it and you refine it over a lifetime (literally) of performing.

And folks stop slagging Buble, no he's not in the same league as Sammy or Buddy Rich (no is really), but he is introducing a whole new generation to the glories of a singer backed by a big band and the classic American song book.

Great post. I as well am a vinyl hound, Dig the Rat Pack; have some on shiny silver plastic, but two track black is the way to go! Where is this "superstore" you speak of? Cheers!

...and Buddy Rich was the bomb.

Thank you for this post specifically and your blog generally. You've introduced me to stuff (cultural manifestations?) that has enriched my life. I'm a first generation youngish guy from the south side of Chicago and I'm at a point in my life where I appreciate the finer things in life but don't always have the money to splurge. This blog has helped cultivate my sensibility, and I'm much better dressed for it.

Plus, I spent hours last night happily listening to Sammy Davis. Never knew the extent to which Davis gave his performances his all. Top notch.

Thanks, and keep the posts coming.

Let's have a look at you audio rig. Find any vintage tube stereos at the thrift stores?

Do you have the ability to rip that excellent record? I know that it is not the same as a record, but having it live on my iPod would be awesome ... perfect for the Metro commute!

So there I am , reading along, waiting to make a recommendation of white trousers with your sockeye salmon sort coat when blam! Right there in the reader is Mr. Davis, Jr., Buddy Rich and a beautiful backstory told in liner notes. You can swing by the manse any time. Wear that silk dinner jacket.