You all know that I'm a cheapskate. I hate buying new things, and I hate to spend a lot of money for junk. However, I will but new things when they're worth it. I have no problem at all paying for quality and craftsmanship when I have few extra bucks. So, feeling flush after the success of the Top Shelf Flea, I decided to replace my ailing Sebago Campsides. I considered a new pair of Sebagos, I thought about the premium priced Quoddy, but I decided on Arrow Moccasins. 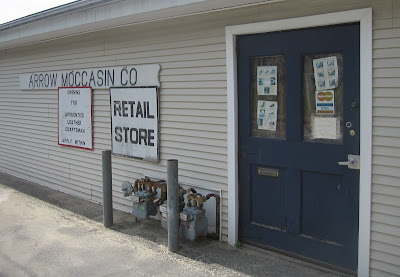 Arrow Moccasin Company has been in business in the same place in Hudson, Massachusetts since 1965. Founded by Ron Ouellette, and now run by his son Paul, Arrow is about as real a product as a person can reasonably get in America these days. Just shy of three weeks ago, I ordered a pair. But rather than have them shipped, I asked Paul if I could come pick them up, maybe chat and take a few pictures of the operation. He graciously granted me access, and offered a tour and a some friendly conversation. 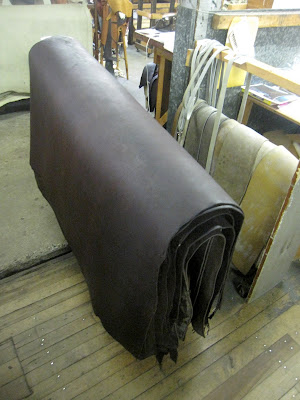 Arrow uses only English tanned Swiss cow hides. Here's a stack of them waiting to be cut and made into moccasins. These things are as thick as your thumb and super heavy. This leather is some serious stuff, and one look will make all of your other shoes seem just a little crappy. 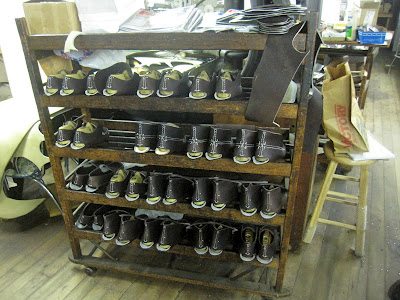 Here we see a rack of various styles in near completion, awaiting final stitching and a double sole. 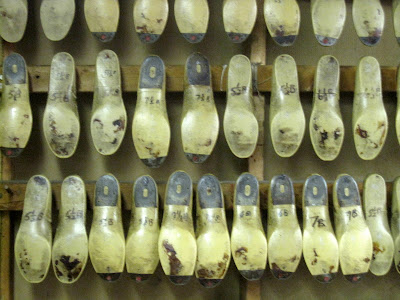 There are shoe-lasts everywhere in this place... 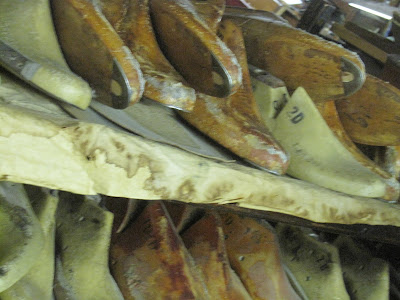 all pretty old by the look of them. 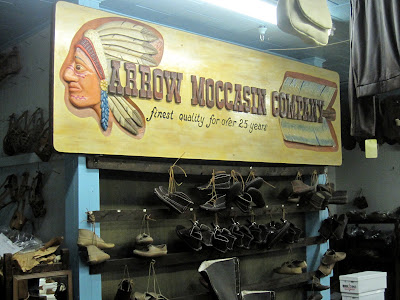 The retail shop is right next to the work shop, separated only by a door. The heady smell of fresh leather hangs heavy in the air. New pairs of Arrow's signature styles hang from hooks by their laces against a wall, while leather vests hang form the ceiling. 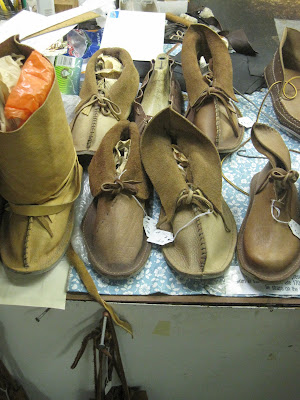 Paul tells me that he advertises in Muzzle Loader magazine. A big chunk of his business comes from historical re-enactment buffs. They tend to prefer these very native styles, something Paul says "may seem a little weird to some people". True, I'm not about to delve into the world of hardcore native American footwear, but the only thing weird about a guy making these kind of things by hand is the fact that anyone thinks its weird in the first place. 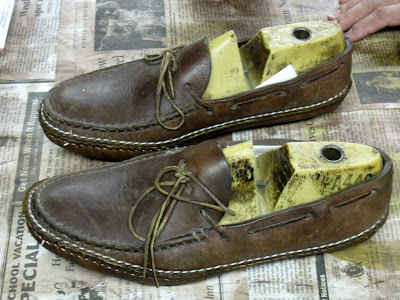 Sitting on a table in the workshop, I spied this old pair. Paul estimates this pair to be between eight and twelve years old. He had just resoled them and was getting them ready to ship back. Just drool over the patina these treads have developed. Chinese made L.L.Bean be damned, this is a real pair of canoe mocs. 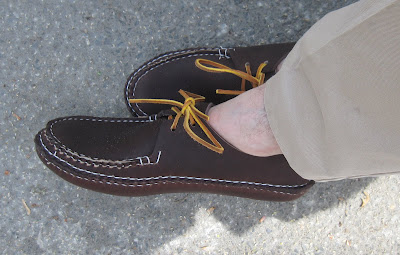 As for myself, I chose the Two Eye Moc. It's the perfect hybrid between a 'boat shoe' and a 'blucher moc'. It's better than either of those because it's 100% hand made in Massachusetts, using only leather and thread.

I tried them on in the shop, and kept them on all day from then on. Believe me when I tell you I have never worn a more comfortable shoe. Paul tells me they conform to the wearers foot over time, which means they will only continue to astonish me with how comfortable they become. Sure, they may be more than a little 'hippie' in style, but they're also pretty damn sharp. I can't imagine a better shoe to wear with shorts. 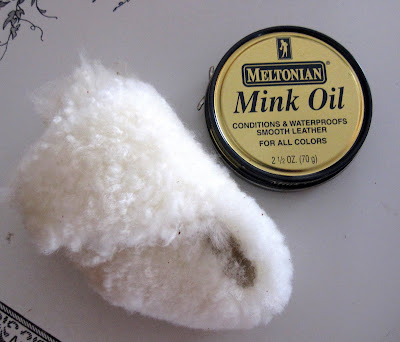 I picked up a can of mink oil while I was there, and Paul gave me a scrap of sheep skin to clean them with. Keeping them soft and oiling them occasionally should help them last for many years.

Arrow Moccasin Company was started by Paul's dad Ron in 1965. After having spent some years as the boot maker at Olde Sturbridge Village in the fifties, Ron decide to strike out on his own. Since then, Arrow has been providing moccasins derived directly of a native American heritage that are stylish and wearable to this day. Each pair is made completely by hand, by Paul or one of his 'elves' who help out during the week. The leather is cut by hand, and then sewn using an awl and a thick needle. My double soled mocs cost $131, short money for handmade quality. They also will resole any of their shoes, for about $58. It's a service Paul estimates is needed every five years or so.

Perhaps not surprisingly, Arrow moccasins are very popular in Japan. They do love their Americana and I guess it doesn't get much more 'authentic' than this. Paul was perhaps a bit apologetic at taking two and a half weeks to complete my pair, but, as he said, 'it's tough to keep up when you're making every pair in the world yourself.' He seemed a bit surprised when I told him that Quoddy took months to fill an order.

In closing, An Affordable Wardrobe highly recommends Arrow Moccasins. After all, if you're going to drop some scratch on new products, better make it count. 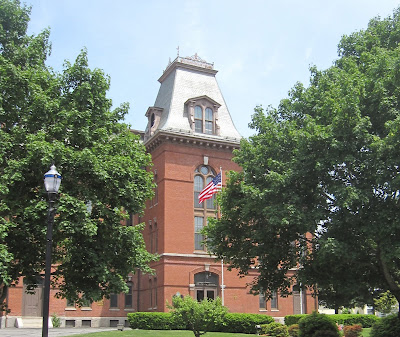 As a side note, the Town of Hudson is a sleepy little place just off I-495 filled with 19th century architectural gems, like the town hall seen here, and a number of excellent Victorian houses. If that's your bag, drive up and grab your shoes in person. About 45 minutes from Boston, and well worth the trip,
Posted by Giuseppe at 8:47 AM

This doesn't relate to the post at all, I just wanted to express my thanks for your perspective in this blog, which seems completely different from just about every other clothes/fashion site I've seen. I'm a relatively young student, and reading here has given me the inspiration to start paying more attention to my appearance, and just as importantly the confidence to forget all the hype around expensive clothes and accessories, which I thought was a necessity to look good, and has always been my main rationalization for being sloppy and indifferent in my dress.

I'm a pretty heavy Internet user too and am usually skeptical about how much blogs are of real benefit, since they usually seem to be more about the authors than anything else, but I think reading your stuff has really begun to change my thinking for the better. So thanks again, I'm glad I came across the site.

Guiseppe-I love your blog and have been reading a long time. I used to get moccassins in hand made in Ely Minnesota (Henry's Moccasins)and yes, hand made are wonderful.
One thing, if you wear them on sidewalks or asphalt alot, if they are double leather souls, they will develope holes quickly. Not from "bad quality" but because they were not really designed to be worn on hard, abrasive surfaces.
Keep on writing-love your style.

Those look great! Can you give a little more detail on their sizing? Cut big/small? Close to Sperry's sizing?

So I take it he didn't go for the boat sole loafer with the penny slot?

Still those mocs look great. 5 YEARS for a double leather sole? That's some serious longevity I was gonna snag a pair of Quoddy's blucher mocs come bonus season, but now I'll put Arrow in the running.

With respect, the most of the LL Bean handsewn moccasins are made in El Salvadore. I suppose that's not that much better than China, but it is a little bit.

Beside that fact, 69 bucks is dirt cheap for a pretty decent shoe (even though I would prefer an Arrow or Quoddy myself as well.)

The picture of the resoled pair has just about sold (soled?) me.

How long until an anonymouse pipsqueaks about your abominable shilling for this business? ;-)

I think it's great that you've found one of the few American shoe makers left and have patronized them.

In addition to Arrow, Quoddy, and Henry's, let's also remember Red Wing and Wesco (West Coast Shoes), as well as Allen-Edmonds and Alden. All of these companies make their shoes here. You do have a choice, and you can get quality American-made footwear of all kinds--casual, work, and dress.

Thanks for posting the photos. I've been loving the trek mocs for 2 years now. Maybe I should take the plunge!

Thanks for the heads-up about Arrow moccasins! Well done, G-Dawg.

Am also interested in the sizing. Do they run true? Have had to return so many pairs of shoes through the mail and would love to avoid in the case of the Arrow canoe mocs I'm about to buy! Thanks.

I don't need more clothes, absolutely have TOO MANY shoes, but NOW want these moccasins!!

This is, perhaps, your best blog post ever. Bravo, and thanks. AEV

Anonymouse and mice. My word, what a wit. What a splendid wordsmith. Surely, you should be writing for Private Eye.

Great post. I quite enjoy checking out your blog. You do a fantastic job with it. I hope you've been having a wonderful week.

C'mon, anonymouse 9:03. At least I have the imagination to come up with a memorable(?) handle, and the courage to use it consistently. ;-)

Sniping is easy. You anonymice are so predictable, the way you pooh-pooh G and all the hard work he puts into maintaining this blog--and he does it without any expectation of remuneration!

Creating content--that's hard. At the very least, come up with some constructive criticism--or is that too hard, too?

I generally wear a size 10, which is what I ordered, and they fit quite well. I will say the shoes seem to run a bit wide, which in my case is a good thing.

One week out and I find they become more comfortable each day.

Picked up a pair of these myself about a month ago, and absolutely love them. It's been hard to make myself wear some of my many other pairs-- they're shockingly comfortable considering it's just two layers of leather between you and the ground. Thanks for the post!

I also bought a pair about 2 months ago (double sole canoe moc) I just love the SMELL of the leather. I have a couple of pairs of Quoddy's and the leather smells nothing like that used on the Arrow's.
My only complaint is that I really would have liked them glove lined. I asked when I called up to order, even offered to pay whatever extra it would take to complete the lining. Alas, they said it wasn't possible.
Regardless, I wear them religiously...indoors and out...it has just taken a few weeks for my foot to adjust to the lace gouging the instep of my foot, but the benefits of these mocs certainly outweigh the few flaws.
Thanks for the inside recon on the shop...great to see.
Joe

TO SIR - how did i miss this post? i've been wanting some arrows for DAYS now... the ring boots are about the most beautiful shoes i've ever seen... if only i could wear them to work - then my wife would let me get them! HA! still, i'm scraping my hard earneds together and putting it away for the day i can call up Paul and give him my debit card number! what a great day that will be! i'm sure those double soles will out last me by a long ways - hopefully my son will wear the same shoe size as me.

Thank you so for sharing the trip to Arrow Mocs company. I am looking to try them out. May I ask: how flexible are the shoes? The leather seem awfully thick but you say the shoes are very comfortable. how easy would it be to fold a shoe? Is it on the same level as flexibility of __?__: Hiking boots? Converse? Running shoes? Slippers? Flipflops? ballet shoes? Cardboard? 30oz yogurt tubs? Five Fingers? Do the toe boxes let toes spread apart inside or do they cradle toes like conventional dress shoes? Again, thank you for the blog.