I don't generally care for shopping on the internet from large companies, mostly because they inundate you forever after with useless print catalogs. While it is true that I like old and even anachronistic things, print catalogs these days are an inexcusable waste of glossy printed, hard to recycle paper, little better in that regard than supermarket circulars, encyclopediae and phonebooks. Still, I do like to look at them and I curse the way they have of making one want something one doesn't need...but I guess that's the point. 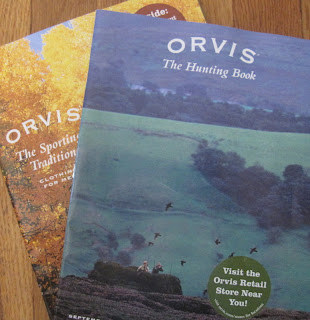 Two such catalogs arrived today from Orvis. Orvis is a strange company to me. Last year, I ordered a Tyrolean hat from them, which I love, and I always thought of them as a sort of upscale L.L.Bean. But I must admit to being largely disappointed in their catalogs. For lack of a better word, most of the stuff is plain old frumpy, stuff for old white guys. And not cool stuff for old white guys, or even stuff brilliant in its goofiness, but just plain old dorky grandpa stuff...mostly. But the supplemental catalog, entitled "The Hunting Book", restored the imagined reputation they had with me.

Guns, fishing gear, and camping bar sets abound. That's more like it...archaic hunting stuff for old white guys. This I can hang with, maybe even find some expensive thing I don't need to pretend I'm going to buy, or even actually buy when it goes on sale, thus insuring a steady stream of these catalogs for years to come. And then I turned the page to discover Manor Tweed Estate Shooting Gear: 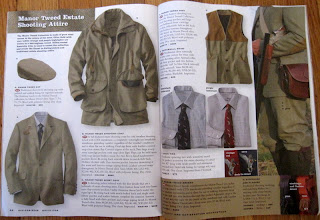 I suppose we all knew this kind of thing still existed in England, but amazingly it's available for sale here in the United States, as in, you can really get this stuff, and presumably wear it to go out someplace and kill a duck. 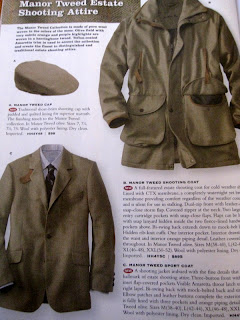 Cap, coat and sports jacket (as in: jacket worn for sport, like hunting), all rendered in real Scottish tweed.  To be worn with: 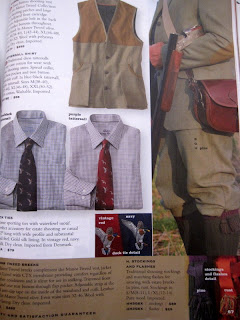 Breeks, stockings, flashes, tattersall shirts and neckties with embroidered waterfowl. Combined with the wooden case containing a bottle of Talisker and glasses shown a few pages previous, this get-up beats all stylish hell out of blaze orange, camo, and canned beer, theoretically.

As amazing as it may be that such things are available to us, you can rest assured I won't be purchasing any of it. For one thing, I don't shoot waterfowl, for another, it's extremely expensive, even if possibly worth it. Lastly, I can't help but think that hunting in America, the only thing keeping the other hunters from killing the poor bastard who arrives in this get-up for his sheer pansy-ism would be the Scotch. And after that's gone, a fella better run...fast, like a deer. Not to be harsh, but there's a fine line between liking old stuff and living in the past, and this sort of thing, anywhere but England, may be far on the wrong side of that thin line.

Personally, I'll settle for things that merely hint at this lifestyle: 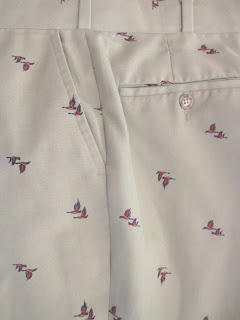 Such as this pair of silly pants, which may just get me killed for sheer pansy-ism yet, acquired this morning for $5.99, hours before the arrival of the catalogs. 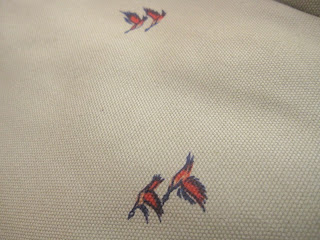 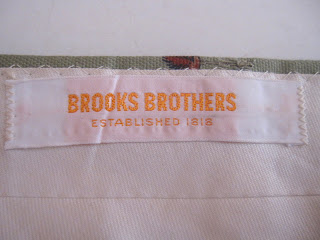 A relic from the Brothers (there have been a lot of those lately). Irresistible.

The ever faithful Mr. Lee is altering and cleaning them as we speak, but I'll have them back just in time for duck hunting season.
Posted by Giuseppe at 6:51 PM

Ha! Yeah, you'd get some strange looks walking to the blind in that stuff. There's still some cool, accessible gear to be had, though. In the field, I rock Bean boots, wool pants, and a Pendleton sweater over a chambray shirt under my marsh-pattern camo jacket. It goes nicely with the traditional oiled-finish on my gun's stock. If you keep the focus on function, the guys won't razz you too badly.

As an old white guy, I claim umbrage... UMBRAGE!

No, you're right. The Orvis catalog is always somewhat disappointing. I do enjoy drooling over the Balfour pages, though.

Those pants are amazing. Good gravy. Silly be darned.

I enjoy drooling over these catalogs as well. I have many relatives who shoot waterfowl (as well as just about anything else that moves, you know- farmers) and I can only imagine what they would say if I showed up in some of this stuff. And don't let Mr. 10engines hear you bad-mouthing "blaze orange, camo, and canned beer."

I always felt Orvis catered a little too much to grown men who want to play dress-up. Their western wear, for example, is just silly: I used to work (for very little money) on cattle ranches and nobody but a jackass from the city would wear that stuff, nor could they afford it if they wanted to do so.

I do have a fondness for some of their English clothing, however. I bought my Barbour Beaufort jacket from them a dozen years ago, and a pair of moleskin pants which I love. I think the key with this manner of clothing is to incorporate one item—wear a tweed hacking jacket for daily wear, or moleskin trousers with a sport coat—to one’s everyday wear. If one were to show up dressed head to toe in this, they’d look absurd.

Enjoyable blog, by the way.

The Orvis stuff you posted is for estate shooting, which is mostly clays, maybe upland birds. That's a far cry from duck hunting from a blind using decoys. The upland bird hunting crowd is quite a bit different from the average deer hunter. I'm betting they wouldn't feel too strange wearing that gear.

Other than that, love the blog. I've been an avid reader for quite some time. This is the first time I've been able to make a real comment on something haha.

I've had decent luck thrifting Orvis lately. I acquired a couple shirts and a cotton twill travel jacket which has like a dozen pockets. Good stuff, even better price!

Love Orvis...quality gear that stands up in field and duck blind....can find good Orvis on E-Bay

Those breeks are pretty sweet. I really wish somebody made an affordable pair of those, I'd wear them cycling.

I did recently thrift a really nice pair of Orvis Khakis for $2 and they have quickly become one of my favorite pairs of pants. Plus, they are quite a heavy material and should last for a long time!

This pair of pants are by far the best find I have seen you post, no question.

I just wore an Orvis tweed sports jacket today, with elbow patches and pleat at the shoulders and everything. I really like it, but fear it's too big. Oh well, it was $5 at a thrift shop. If only it was 2 inches smaller across the shoulders...

I live in rural England and it would be wierd to drive through the country in Autumn and Winter and not see 20 or 30 people walking through the fields dressed like this.