My apologies to any ladies present for this one. Truth be told, men tend to keep reading material in the, ahem, restroom. Abhorrent? Perhaps, but a "guy thing" nonetheless. Recently, this particular triumvirate has convened in my own home: 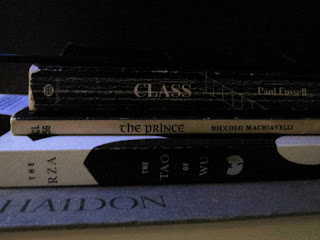 "Class" by Paul Fussell, 1983; "The Prince" by Niccolo Machiavelli, 16th century,
each less than a dollar at thrift shops.
"The Tao of Wu" by the RZA, a Christmas gift from Kid Brother
A now classic tome on the American class structure, and a humorous one at that, especially from an East Coast point of view....an ancient text from Rennaissance Italy, written by an aristocrat, on how to be one....and a philosophical work by a modern rap artist who draws on Christianity, Judaism, Islam, Bhuddism, comic books and kung fu movies with unbridled equanimity.﻿ I've read all three, and all three now have been filed for quick reference and cross checking. For good measure, they sit atop a Phaidon book of ugly British post cards, mainly pictures of motels, highways and rest stops, called simply "Bad Post Cards".
If that doesn't explain in condensed and distilled form the sort of thing that goes on around this blog, I don't know what will.
p.s. 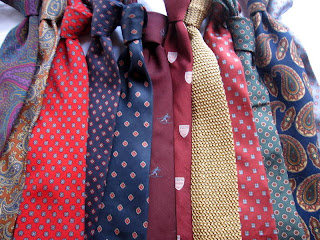 the necktie selection at the Shop has been amply replenished. There are also a number of non-clothing items available, some suitable for children, others not. Go see.
Posted by Giuseppe at 10:08 PM

Wu-Tang Clan ain't nothing to... well, you know.

I've been picking over 'Class' for a number of years now - love Paul Fussell and his style, but I sometimes close the cover with a pang of guilt. There's a genuine undercurrent of self-loathing on his part, and reading between the lines its clear that Fussell is crippled by his own middle-class angst.

On reading his later army memoirs, you can't help but think the proles under his command were tempted to 'frag' his ass.

Still, he's funny as hell - I'll give him that.

A bit off from the topic, but I must share: I haven't been much into thrifting until coming here. Friday, I picked up a wonderful US made Gant half-lined cotton sport coat made for the best men's store in town. Price with tax: $6.37.

P.S. Camus is in my "office" currently.

I'm a guy and have never undrestood why people would read in the bathroom. Other than being pretty gross, does it really take that long?

Anonymous: not really, which is why the English gentry favored the humorous Punch magazine - something to take your mind off the motion but not enough to get too engrossed in.

On the subject of thrifted ties; I feel I have more than a fair number of ties at my disposal, not least a few delightful wool tartan ones, and a knit green wool one from the AAW store. I usually see one or two that are decent every time I pop in to a thrift store, but resist, considering I don't wear them that often as it is. But I think just one or two more would make the collection utterly complete; namely, silk grenadine ties in navy or burgundy.

Have you ever come across silk grenadine ties in thrift stores? I usually see the usual collection of cheap polyester numbers, a fair amount of satin silk, and some wool (even a corduroy one this weekend), but never grenadine. Should I just give up and look at investing in a quality piece at retail?

Best leave this kind of queasy Weltanschauung stuff to little man Cod and stick to what you do so well. Though I'm worried again by the degree of 'billow' in those trousers. Might they be better taken in, or is it just the photography?