A Deep Breath of Fresh Air

I don't like to jump the gun and declare Summer the first day its warm enough to leave the house without a coat. Better to ease into things. Though I did pack up a lot of heavy clothes and move out some brighter, lighter fare, I still kept a tweed handy for cold nights, preferring instead to take whiffs of Spring.  Now the whiffs have become deep breaths. Time to brighten things up...a little.

My new favorite double breasted blazer, despite the extra cloth, somehow feels more "Spring" to me than my old single breasted. With pale tan gabardine slacks it's a cinch. 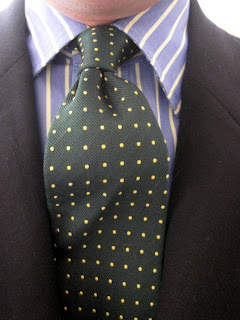 An end on end shirt in royal blue with yellow stripes and a long pointed spread collar (H.Herzfeld, $5.49) and a hunter green tie with woven yellow dots (Polo, made in Italy, $1.99) that doesn't see nearly enough action are a refreshing change from my usual thick oxford button down and stripes.
Watch out. Go-To-Hell pants coming any day now.

p.s. new items in the Shop. More to come in throughout the week.
Posted by Giuseppe at 9:23 PM

G - you're favorite DB jacket doesn't ft you in the shoulders.

It's tailored in a soft "drape" style, a typical aspect of which is shoulder line that extends a bit past the natural shoulder. I gant you, different than almost every other coat I own, but I assure you it fits just fine.