Improvements and Upgrades (or, relativity) 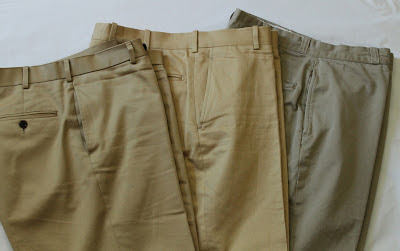 I'm not about to open a conversation on blind brand allegiance. Nor am I about to infer that you are less of a person for using mass market products. I am only going to suggest that it is in fact possible to do this while abstaining from participation in the mass market, and in the long run, come out ahead.

This time of year, I tend to shy away from dungarees for the go-to pants in favor of khakis. For one thing, I find jeans to be nothing but uncomfortable on a warm day. For another, khakis run the gamut from casual to dressy. For this reason, several pair (or at least a few) are best.

When it comes to khakis, or other widely produced items,  thrift shops come into their own. In the past, I've owned many pairs of J. Crew "Essential Chinos",though I never purchased a single pair from J. Crew. Thrift shops are full of them, usually for five or six bucks a pair. They're good enough, and cheap enough. I don't even have to settle for "Dockers". In Spring, I practically wear a uniform or tan pants and navy blue jackets. As such, khakis are something of a commodity for me. So I buy the mall brand khakis for cheap, and wear them out.Then little by little, they are replaced with better goods,for the same price. To wit, the current rotation, seen above,

At left we have a pair of Brooks Brothers "Madison" chinos. A nice, darker shade of tan, these chinos do dressy and casual equally well. I have this pair dry cleaned, so I wear them dressy when they're crisp, and casual when a little dirty and rumpled. A definite improvement and/or upgrade to the J, Crew models, in a very nice shade of darker tan. Nice as these chinos are, it pays to remember that once venerable stalwarts like "Brooks Brothers" are only just brand names now, and no real guarantee of quality and/or "realness". ( We used to call that 'authenticity' in the day, before that word was considered "artisinal.")

In the middle, we have the "fanciest" pair.  A custom job from Alan Rouleau of Boston,this pair is made from a lighter, more delicate cloth, a clear departure from the military/hard wearing roots of khaki clothing. I wear this pair almost exclusively with a blazer and tie. Dressy for when no one else is and confidence is your only weapon.

Far right, vintage army khakis. Thicker than the others, heavier than  the others. These are the real deal, the pair I use for working around the house, running errands, or anything that involves a lot of driving.

I still have an old pair of J.Crew 'essential chinos" too. Stained with paint from the kids' bedroom, they are soft and comfortable, perfect for anytime when I have real work to do. I even wear them out sometimes, in spite of the recent paint splattered khaki silliness some designers have engaged in lately.

You'll often here clothing blogs give the advice to young men that when starting to build a wardrobe, it helps to find good less expensive versions of things to start with until you can afford to move up to the better stuff. This is where my point about how thrift shops can be less of a compromise than "big box" stores come into it. You can still begin with starter stuff, at a price so cheap that you're not wasting your time or money on inferior goods. You don't even have to participate in the corporate cycle to acquire them. Better still, when the opportunity to upgrade comes along, you can step up to the better stuff for the same price, and it will effectively be a reward for your patience and perseverance.

p.p.s. I began writing this post last night, then saved the draft. Seems it got hacked and published with some added weird stuff at the end. My apologies to anyone who read it in its weird version. I've fixed the problem and completed the post properly.

Quality control, Wardrobe, old thing; you need to reread your last post about magic cheap shoes in which you give exactly the advice which you imply (not 'infer')in your current post is the currency of lesser blogs...

I don't recall saying those shoes were magic. The word I used was "decent"

As for the grammar, you're right. I made a mistake.

I also noted that for many people, even veteran thrift shoppers, the line is drawn at shoes.

So true about khakis. I am a teacher by trade and I wear khakis because they are cheap, durable, can take endless washings, look great with almost anything from dressiest shirt to "beat to hell" polo. Pencil lead, chalk residue? No worries with khakis.

I usually buy a few pair from the thrift store each year and the more I wash them the better they feel. Usually, I can go to a thrift store with $20 and come out with at least 3 good pairs. The last time I purchased J Crew khakis (some 13 years ago), I spent about $45 on 1 pair. Recently, I have bought J Crew khakis at the thrift store for 1/9th that amount!

We men tend to be very hard on shoes (unlike our female counterparts), so I usually draw the line at shoes when thrifting since most look "beat to hell".

Lastly, most people that shop at thrift stores are VERY picky...and this usually trickles over to regular "big box" department stores. I think the pickiness is due to the fact that we usually can't return the item once bought, so we have to be hyper concerned about details and construction (can this fixed, or can this be altered?).

It's a good conundrum: to buy decent (OK, 'magic' was British humour on the loose), cheap new facsimile garb,like your De Dion Bouton chukka boots, or to buy really good second hand stuff. I encourage my sons, aged 17, 20 and 22, to do both, in the hope that they will appreciate quality and utility and happily they will wear new Tyrwhitt shirts (which I would not) with third hand Gucci loafers that fit like old gloves. I tell them to buy the best that they can afford, a useless cliche that will no doubt completely fail to steer them towards the better stuff.

And in fairness to you, consistency is a vastly overrated quality...

I have purchased three pairs of used shoes that I could never have afforded otherwise, Coincidentally, they are all from Brooks Brothers. One pair had been worn two or three times tops; another had a bit more wear and a scratch; and the other needed new soles and heels shortly after purchase.

So what? The scratch is almost invisible after a trip to the shoe repair store. $60 (cost + repair) for a pair of (roughly) $600 shoes sounds like a deal to me. The pair I had to get new soles & heels for retail for about $350; I got them for three bucks. I spent fifty bucks on repairs, and I will have to spend that much again every five or ten years. In return, these shoes may very well last me the rest of my life.

I still get why some people don't want to wear another man's shoes, but I'm glad I cleared that particular mental hurdle.

You are quite accurate about some of the very high quality goods available in thrift stores.

I know, because I spend a small fortune on very high quality sportswear at retail.

I have donated tens of thousands (no exaggeration) of top quality goods many of which were very gently or barely worn.