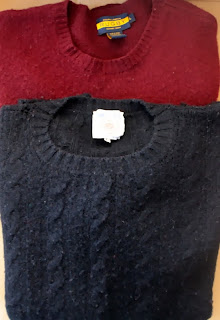 I recently acquired two shaggy Shetland sweaters, on separate occasions, in the same thrift store, for the same price. This is something of a score, as I find good sweaters are among the hardest things to come by in these places. A good sweater is like an old friend, and I think many people hold on to them until they reach the end of their usefulness, eventually becoming too moth eaten or perhaps accidentally shrunken in the wash. If those two things don't kill a good sweater, then the hangers that most thrift shops display them on will almost certainly throw them out of shape. But now and again, they do turn up. 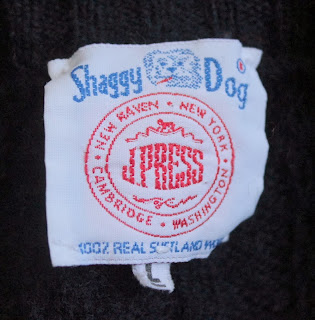 The navy blue one is the real thing, and iconic J. Press "Shaggy Dog", highly coveted by preppy/trad/ivy/whatever enthusiasts everywhere. I've wanted one for ages, but never owned one, as even on sale the price of these things is prohibitively expensive. Last I checked, $139 was a sale price direct from J. Press, and even on the internet folks are getting upwards of $100 at auction. 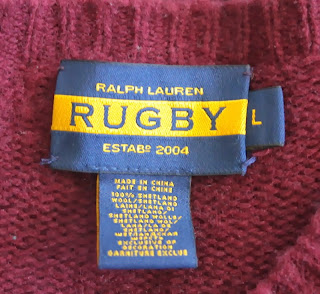 The second is something of a knockoff from the defunct (and soon to be collectible?) Ralph Lauren "Rugby" line. Made in China, but just as shaggy, and rendered in a classic shade of burgundy. This one had silly elbow patches on it, but it was nothing that ten minutes with the seam ripper couldn't cure.

Of course, anyone's initial inclination would be to assume that the J.Press is the superior sweater, but it may not necessarily be so in this case. Note that both are size "large", an arbitrary designation at best. The Rugby sweater fits me perfectly, with a hem that falls right at the belt line and just enough room to move without being so bulky as to fit under a tweed jacket. The Press sweater is enormous, with a hen that falls almost two inches longer and so much bulk under the arms as to be tight under my Barbour. I've worn each of them, and I hate to say that I feel frumpy in the Press sweater, and the Rugby has fast become a new favorite.

Thrift stores have a way of leveling the playing field. In truth, the provenance of these two garments clearly means the press sweater is "better". But in some cases, by the time a thing has been purchased, used and donated to charity, it's original provenance becomes less meaningful. A great item will always be a great item, but a lesser item becomes not so bad when it's no longer on display in some awful macro-store, at some inflated price. For the same price in a thrift store, the difference in quality of these two sweaters becomes almost negligible, but at full retail it would be hard to justify choosing the lesser item. I've said it so many times, but it bears repeating to mention that brand allegiance can be a stumbling block in the thrift store, causing you to choose a less than flattering garment because the name is better. I'm not suggesting the you should settle for less, but rather that there's a degree of relativity that needs to be taken into account in a thrift store. It's worth remembering that no matter where you purchase your clothes or how much you spend on them, fit is always the most important consideration.

In the end, I won't be keeping the J. Press sweater, instead getting to a larger man who will look better in it. I'll keep the Rugby, happy to have given my money to charity to get it. Better isn't always best the second time around.

I purchased 3 of the Rugby shetlands (black, forest green and burgundy) during their close out sale. While I did pay considerably more than you did, I still am very pleased with the cost/quality ratio. I did, however, keep the elbow patches haha...

As a compulsive thrift store shopper in Madison, Wisconsin, I feel your pain. That navy JPress with cables looks like a beauty.

Turn the sweater inside out and take in the sides and the sleeves a smidge. obviously, if you take in too much, the sleeves begin way off the shoulder and it ends up looking wonky, but a small amount could make this a winner.

As a larger man looking to build his knitwear wardrobe, I'd like to speak up for that one - I'll stop by the shop on Saturday if it's still available!

Good points. I have found some excellent vintage Liz Claiborne at thrift shops that far outweighs better labels in quality and usefulness.

As a larger man who lives in the Quincy area, but can't quite afford a J Press shaggy dog on a teacher's salary I was wondering if you'd be willing to sell it to someone who would really appreciate it. If not perfectly fine, just never hurts to throw one's hat in the ring.

My Rugby shaggys are among the handful of their garments that I've kept in rotation since I left the Rugby design team many years ago. The fit was slim without being crazy skinny, there were always great colors and the price was accessible. The unfortunate thing about Rugby in general is that those sweaters were just one of many things they did very well. Sadly, most of the good stuff got lost in the deluge of logos and juvenile advertising.

I was poking around the local thriftie and found two amazing cashmere sweaters - one from Saks 5th Ave and one from Neiman Marcus, both men's and both thick cashmere. And both for $3.99. $2.00 less than the Dockers sweater next to them.

I intend to do just that. The sweater will be for sale in my shop this weekend, and online next week if it doesn't get scooped up.

When the Boston Rugby store first opened, I loved the brand. They lost me when they started making everything crazy tight with skulls all over. Still, even then I remember seeing good stuff in there, hidden among the junk. Funny, it was kind of like a thrift store in that regard.

Ahh well. Then it appears that it won't be mine. I have to attend a wake on the south shore at around Noon, and I have to imagine it will be snapped up before then. Could I just say that I want to buy it now, and paypal you the money. Is it possible to undercut the crowd through sheer hutzpah.

Conor, I am the crowd and I'd be very cross if you snapped it up before I went in on Saturday...

First come, first served. Democracy and all that.

By which I mean, he who gets to the shop first

Good post G. Quick question: how do you remedy shrunken sweaters? Are you able to return the to size?

Clothes get smaller, but they don' t get bigger.

Anon @5:18, absolutely nothing you can do about shrunken wool sweaters. the wool fibers have scales on them and when they're agitated, the scales hook on each other and they never, ever come apart. cashmere doesn't have the same issue because its fibers are so fine.

The J. Press shetland sweaters are made to a strange standard. Straight from the shop they are very long in the body and short in the sleeve. They fit me poorly though I love the wool and quality of the knitting. I have found that dipping the lower half of the body in hot water helps tighten and shorten up the fit to so-so effect.

My wife purchased 12 shaggy dog sweaters at a garage sale for about $50 bucks. A steal no doubt! They were likely never worn. She knew I loved Shetlands and would flip for these. I did..There were L and XL and they all fit slightly different but they did all fit. I purchased 4 more new ones since that time…Yes I have a few duplicates but I love them!