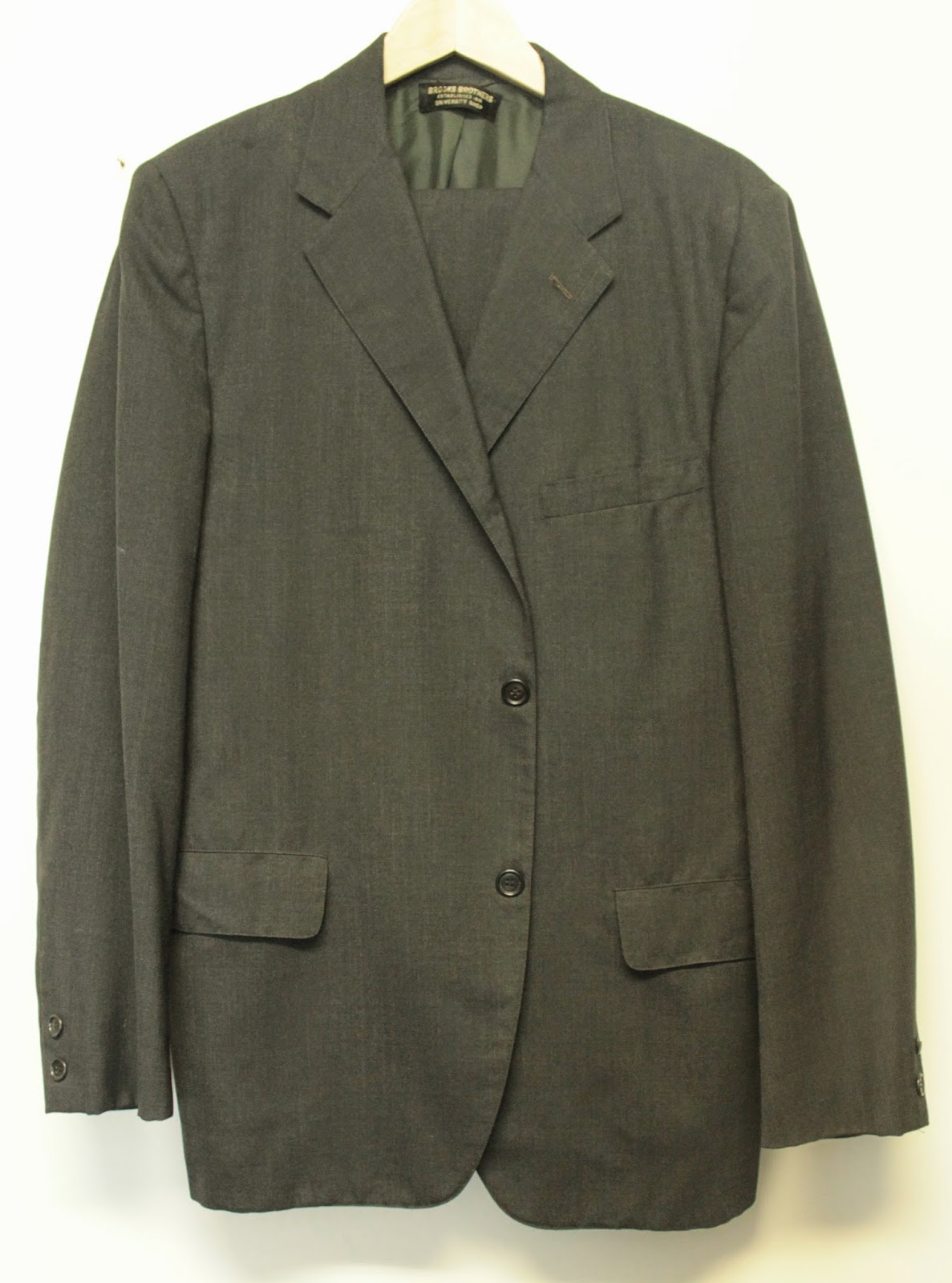 Recently good friend James of 10 Engines gave me this suit, straight out of his own closet, to do with what I could. It's the very definition of a stalwart classic, a charcoal grey single breasted suit in a three season worsted wool. It's been said that a man's suit is like armor, and this one bears that point out. 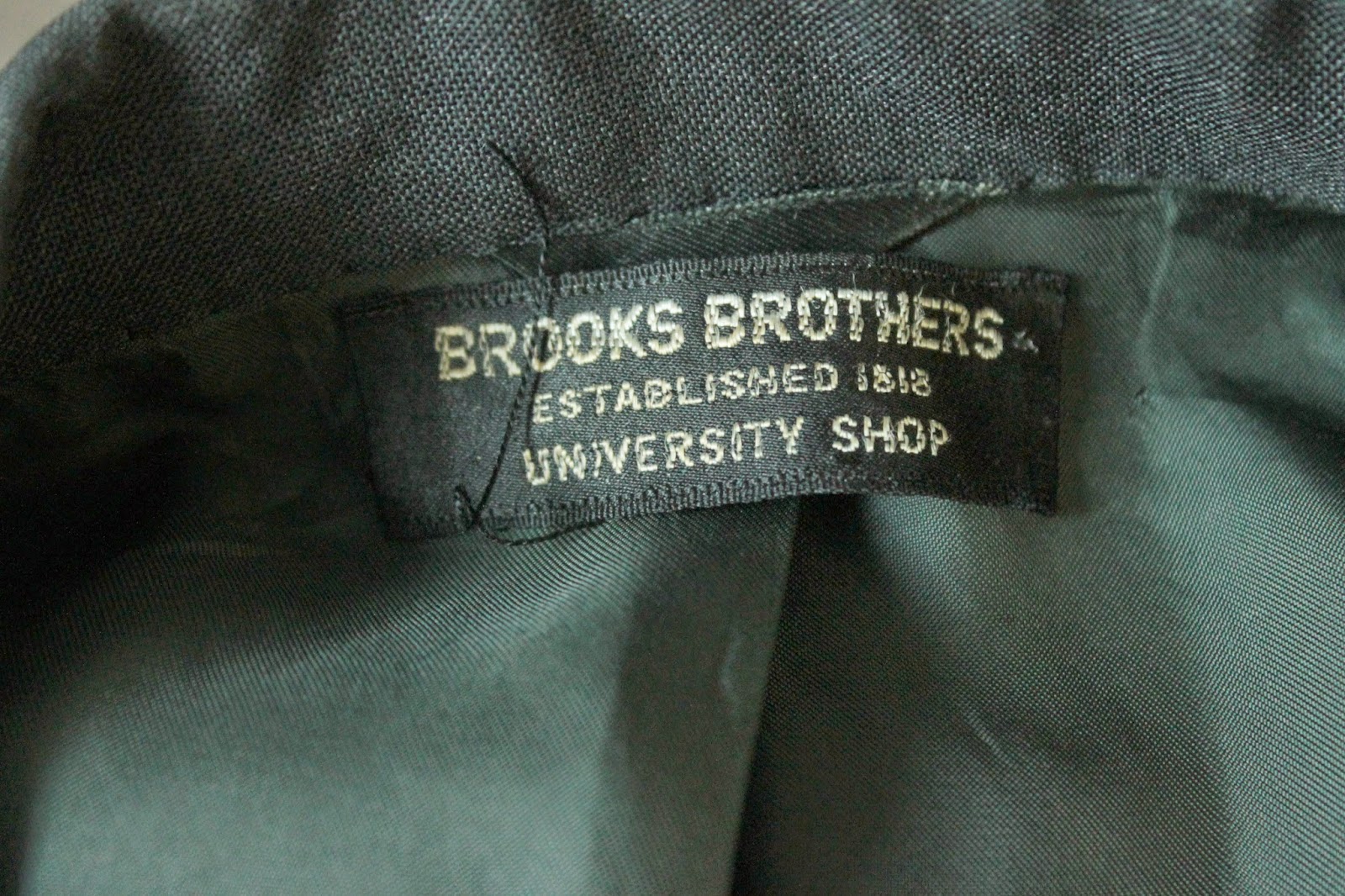 At first glance, it's a trad/ivy/preppy thrift shop/ebay score dream: a vintage 3/2 sack suit from the Brooks Brothers University Shop, likely late 1950s vintage. It's the kind of thing the trad/ivy fanatics dream of at night. But I won't be selling it. It's well worn, and in it's wear and tear lies a story and a soul. 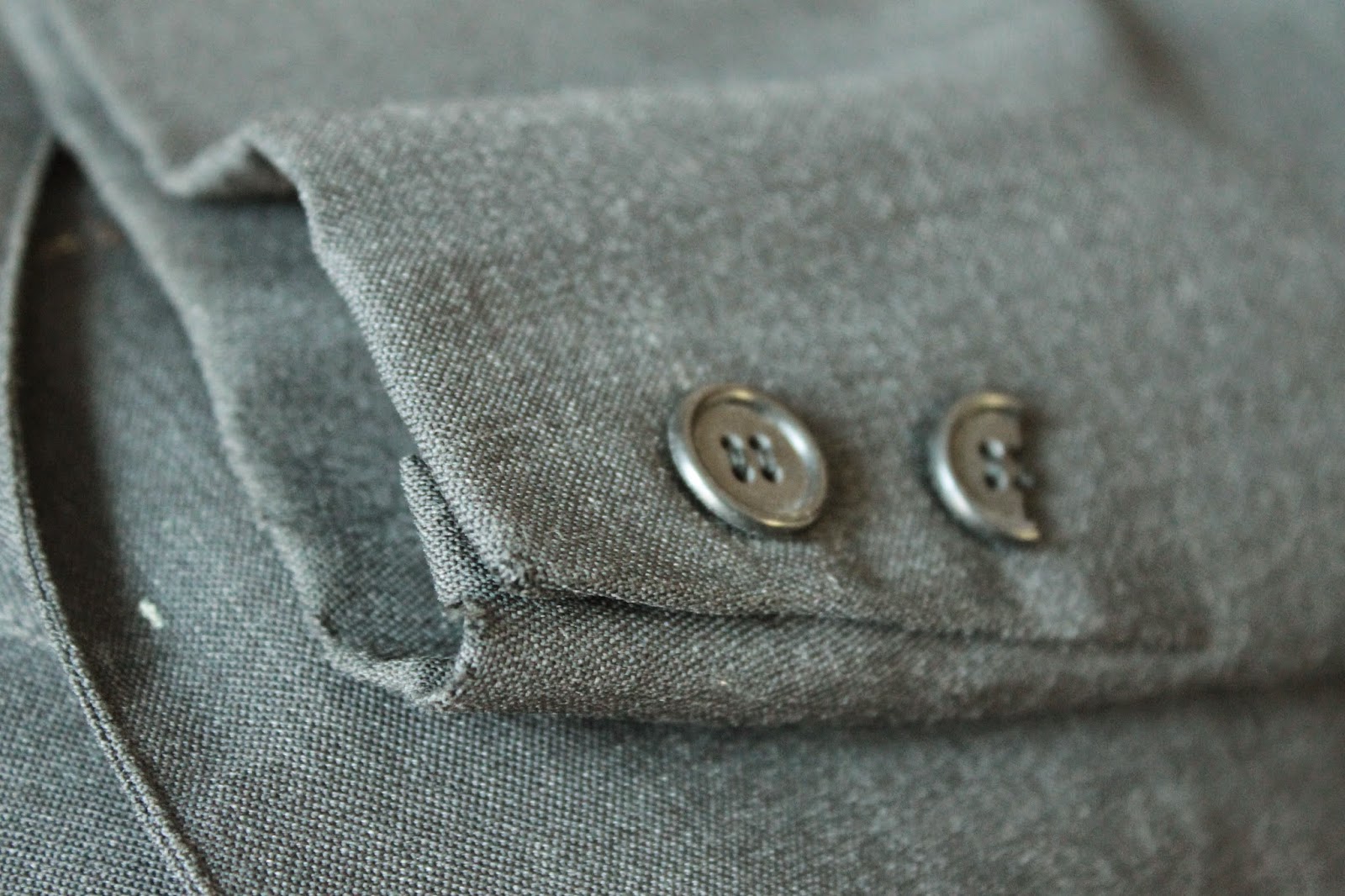 The tips of the cuffs are worn through, and a few of the buttons are broken... 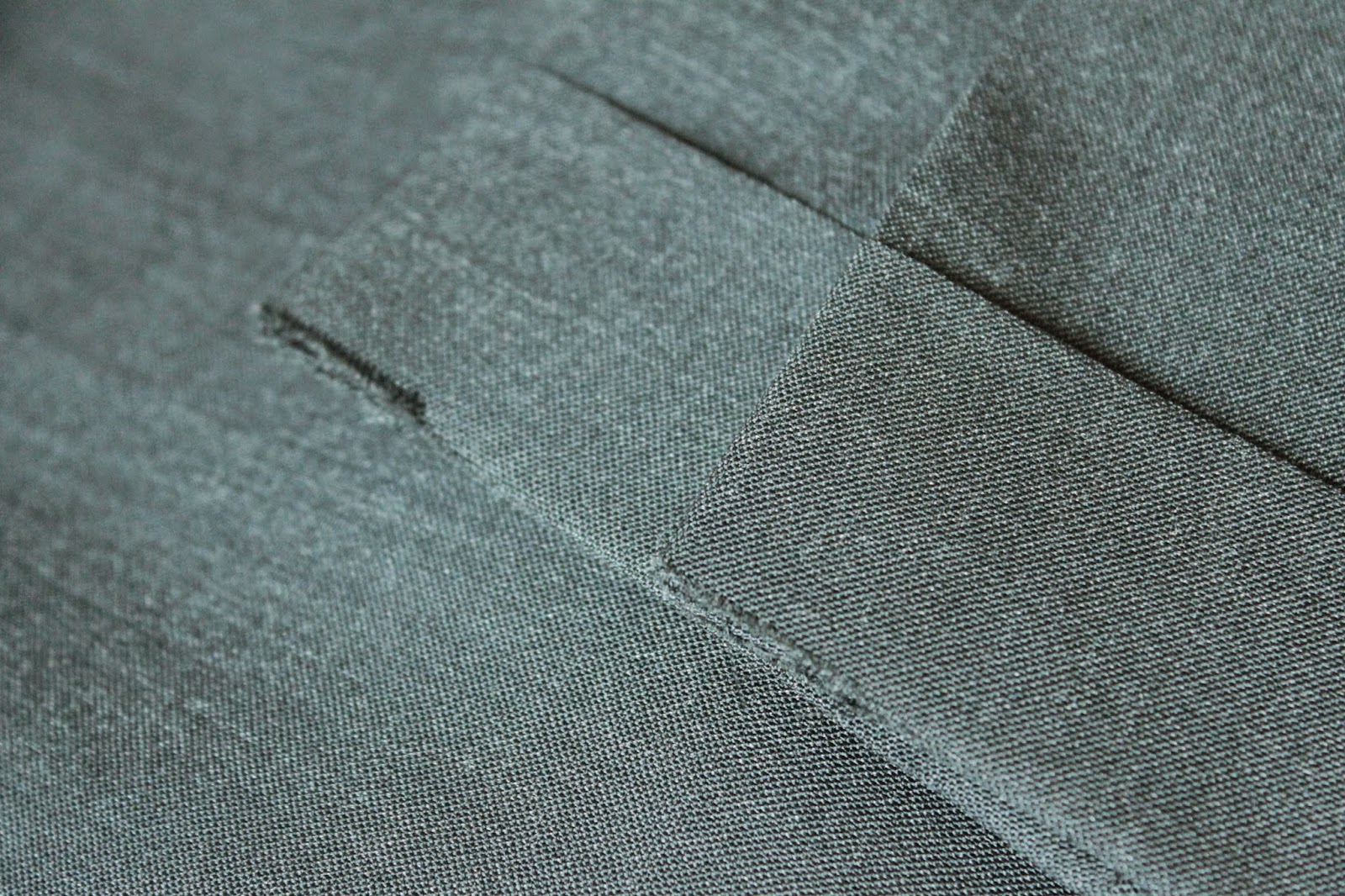 The trouser hems are frayed beyond repair, but check that old style big cuff on a narrow leg opening... 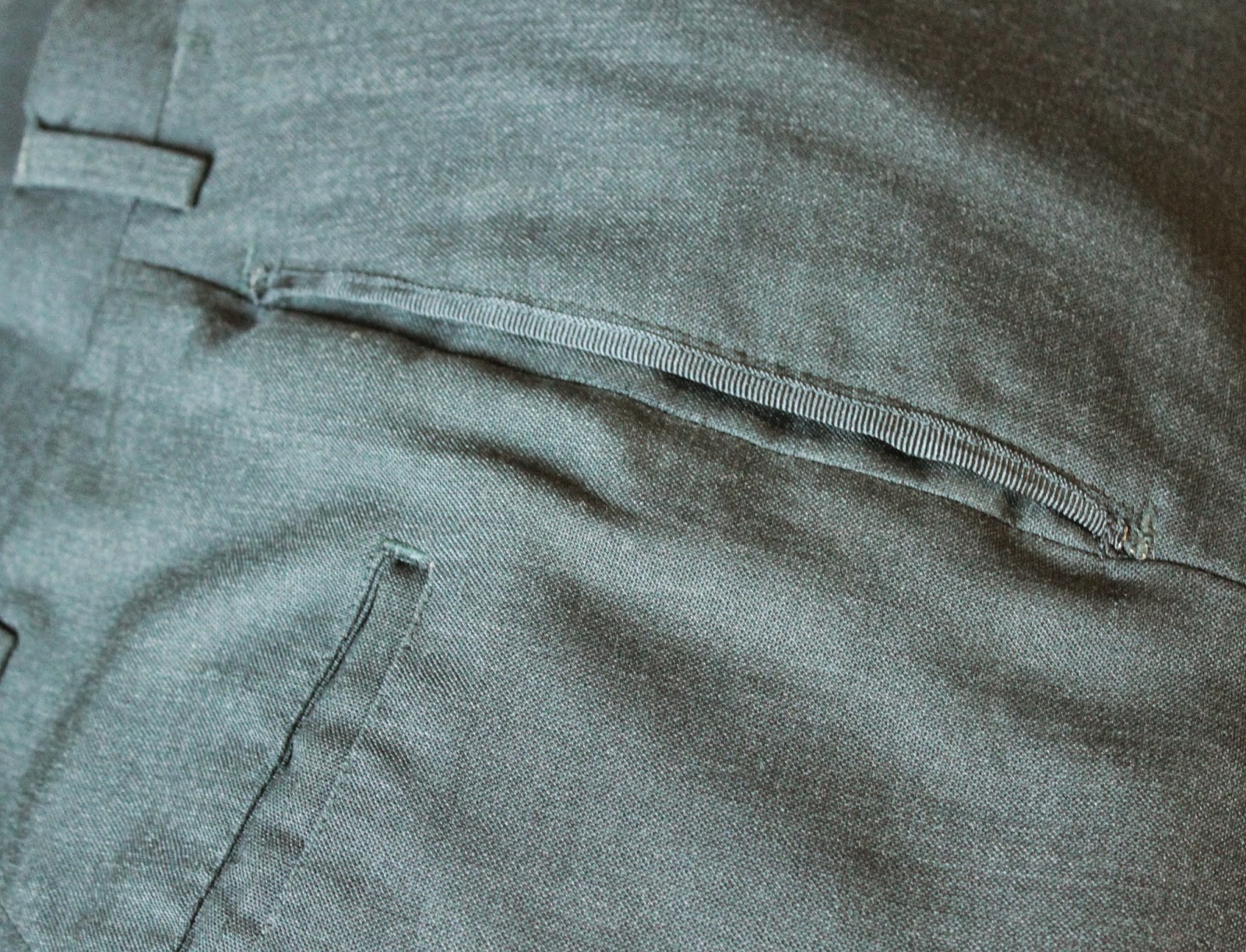 The edges of the trouser pockets have been beaten so hard in sixty or more years of active service that someone saw fit to have them reinforced with a grosgrain strip... 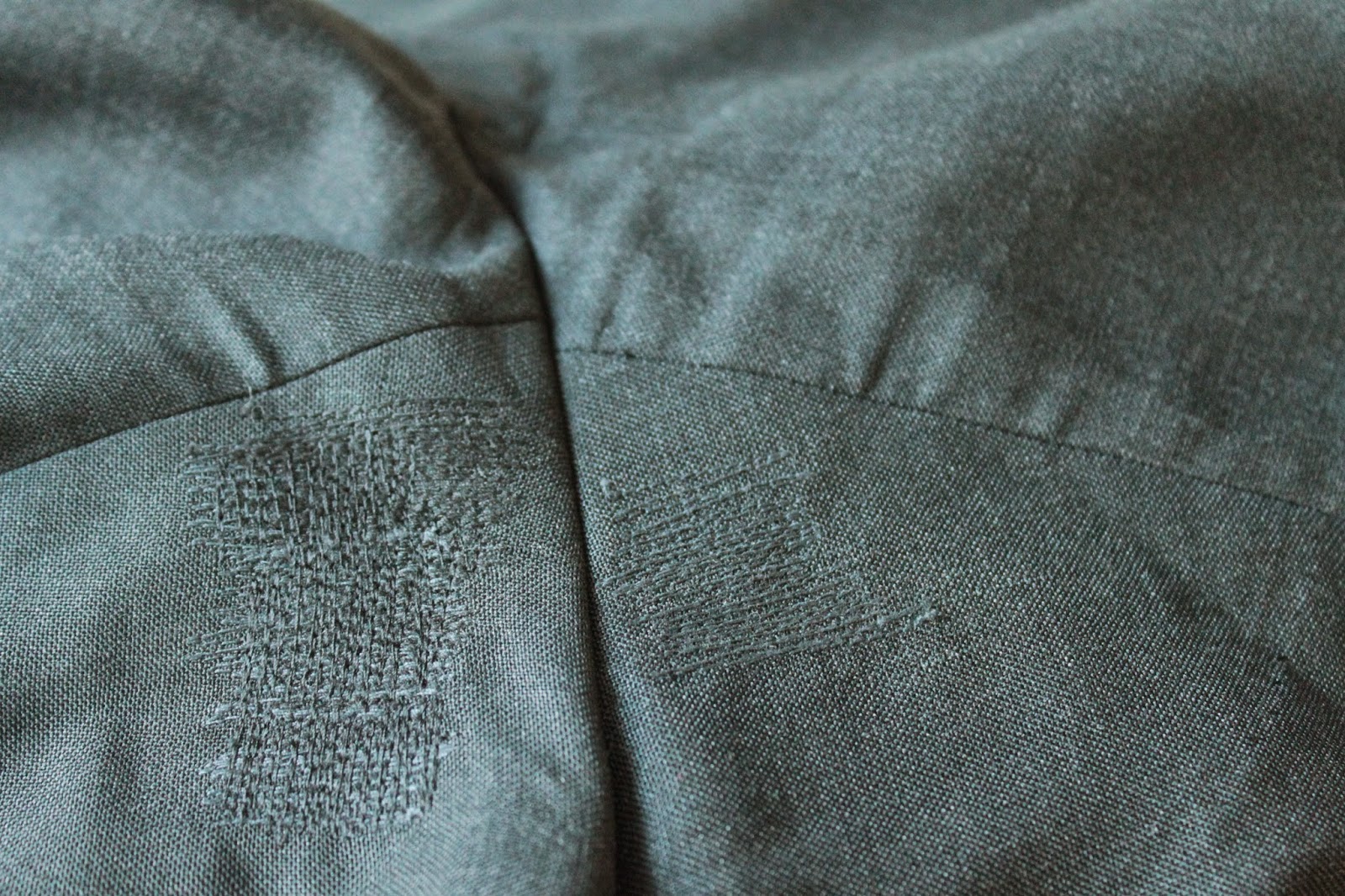 And a crotch worn straight through was at some time seen merely as a call for some old time thrifty repair rather than a ticket to the trash pile.

While this suits condition may render it useless to almost anyone, it has value in it's own way. Indeed, it's value lies in the very defects and repairs that make it an unsalable vintage piece. This suit speaks to a reality in the past that vintage fetishism tends to ignore, and it hints at a story that's worth bearing in mind, especially if you spend any amount of time hunting for and reusing old things.

In the strange world that is the online #menswear community, we tend to think of the Brooks Brothers of bygone days as something of a holy cathedral. It is viewed, along with a small handful of other old purveyors, as something of the supplier or royal armor to the knights of the #ocbd. And indeed, in most ways, it was. But there is another side to that story, and this suit is a strong piece of evidence.

What follows is all pure conjecture on my part, but I beg you hear me out. I think that the man who owned this suit didn't have a lot of good clothes, or a lot of money, but he did have values. He probably scrimped and saved in the late fifties to buy this suit, knowing that quality was worth the time and effort it took to earn it. He likely purchased this simple charcoal grey suit on virtue of it's versatility, usefulness, and probable longevity. It was probably his Sunday Best, and he probably wore it to every important occasion of his life for decades. He might have been eighteen when he bought it; he danced in it with his sweetheart at the Spring semi-formal; he wore it to his high school graduation; every holiday, every Sunday at church. He put it on for his grandmother's birthday that time they surprised her with a trip to the city for dinner in a fancy restaurant; he put it on to pick his wife up from the hospital after his son was born; he wore it to both of his parents funerals.

He wasn't a business man, definitely not a man who wore a suit all the time. Had he been that type, we wouldn't see either the wear or repair that we see on this suit. He appreciated the value in it since it's original purchase, and had it repaired as best he could every time it was needed by a little town tailor who was resourceful in his work. Despite the suit becoming increasingly ragged, he kept it clean and pressed, and every time he had occasion to wear it, that same sweetheart he danced with in the Spring semi-formal told him how handsome he looked in it.

Maybe that's all a bit maudlin, but I hope you see my point. In the romantic past, when everyone wore suits, even poor guys had to have some Sunday Best. In a very strong sense, I'd bet the guy who owned this suit valued it far more than any guy with a lot of suits values his clothes. It was his armor, his good clothes, and though it may have been a bit ragged, it wasn't any less of a grey Brooks Brother suit. Old clothes sourced from a thrift store are great for being well made quality things had for a fraction of their worth. But they also have a story and a soul. For some that's a turn-off, but for an inveterate cheapskate like myself, it's where the beauty in this lies.

That's a beautiful suit and a beautiful post. Is there some way that the suit can have a second life, something analogous to cutting up a beautiful but exhausted shirt to make a pocket square?

Great post...there's a lot of embodied energy radiating from old clothing. Isn't it interesting that the items in a thrift store which are totally outdated seem to possess less energy as they were probably not as important to the owner's wardrobe in the long run and were quickly discarded.

Here in Southern California, there are wonderful old pieces from local tailors. The heyday of custom taioring in Los Angeles peaked in the fifties and sixties when it was a considerable more formal atmosphere here. Once can usually always find one or two relics of this era in an afternoon of thrifting, and their quality (and condition!) is almost always superb.

Thanks for another fine signature post. With a little clever patching, a good shirt and tie, and the right accessories, this suit could still be worn. The late Richard Merkin once wrote a fine essay (in Esquire, I believe)on the elegant style of a friend who only wore old, repaired quality. Start by repeating the grosgrain on the pocket theme...

Adding to this story, perhaps later in life this man's position in society improved somewhat and he acquire another suit, perhaps two. I add this because the suit still exists - he didn't wear it that "one last time".

This has all the hallmarks of what my father used to call a "marrying and burying" suit. My father grew up in rural South Dakota where (back the first half of the 20th Century) it was common for farmers to be buried in the same suit they were married in.

This is the best post I've read here--such a story in a suit. Btw, when I bought my first tweed jacket (it's probably as old as that suit) I was a poor man who needed something for church and dates. I never expected I'd be able to wear good clothes every day. I still wouldn't if it weren't for thrifting. Thanks for a good read.