On St. Patrick's day, the entire city if Boston suddenly decides to be Irish. I've got nothing against old St. Pat, I'm just tired of college boys using it as an excuse to drink all day. So I usually do something obnoxious like wear bright red. 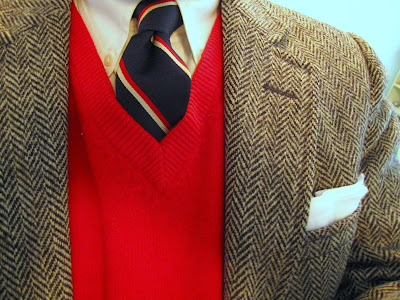 My protest will stand until it becomes common practice for everybody, Italian or not, to walk around handing out Zeppole di San Giuseppe on March 19.

Back in the salad days of Punk Rock, St. Pat's was a pretty sought after night for a good gig, it being the drinkin'est of holidays. This was compounded by the existence of a plethora of nouveau hardcore bands who aligned themselves with Irishness, a particularly Boston phenomenon. This usually involved bagpipes and kilts (aren't those Scottish?), fighting and of course, binge drinking.

Today I dug up one of my old poster portfolios and found one I did for a gig one of my bands had on St. Pat's about five years ago: 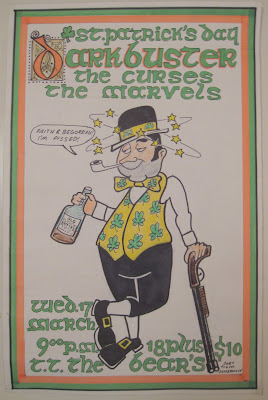 This was just after the Boston Celtics had stopped using this guy as their main logo. That night, I wore a t-shirt with an Italian flag on it that said "Italian Bad Boy. North End Boston", you know, just to be a punk. I tried to convince the guys to cover Angelina at the Pizzeria by Louie Prima with me singing, you know, just to be punks. They didn't go for it.

St. Patrick's parents were from Rome, anyway, which means that technically he's even more Italian than I am. Maybe we should all be eating green spaghetti or something for supper tonight.

i also refuse to wear green. i wore blue and brown. i too hate that every white person has an irish grandmother on march 17th. and the people who actually are irish are just completely absurd on st. patty's day.

Good work - it looks great with the tweed jacket anyway!

I too am anti-Saint Patrick's Day, which is made even worse by my name. I feel like those of us who drink, especially the Irish, don't need a special day to do so. It's Amateur Hour.

Factual point; the Life of Saint Patrick states that he is from a Roman family. It does not mean zeppoli eating Italians, simply the ruling class of Britain in the Fourth Century, most of whom were born Britains and not from Italy at all only they derived their authority to rule from Rome and spoke Latin in the office.

I have a green tie. A green cardigan. Both would be perfect; I didn't wear them on purpose.

'course, the One True High Holiday was celebrated on March 1st. The Feast of Saint David!

yeah, tough to find a parking spot near my yoga studio, which is next to an irish pub!

here, this will give you something to prepare for dinner: http://findingladolcevita.blogspot.com/

The kilt is, believe it or not, an English invention. As for bagpipes, they are found throughout Europe, with variations found in the Balkans, Russia, Italy, and even Scandinavia, amongst others.

On March 19th, I tell everyone I see that St. Patrick was Italian and spend most of the day singing the Italian National anthem. My Irish wife gets a real kick out of it...Great site by the way. Adding it to my blogroll right now

Great idea with
the Red; get those paddies jeered up with the red of St.George=like it