With my days being spent largely at home or in the playground, wearing clothes special enough to yammer about on the internet isn't always a reasonable task. True, I do try to present myself well on a daily basis, but these days that only requires a shirt with buttons. So instead, today we have a delicious recipe that I made up myself (sort of): Italian Sausage Soup, with cannelini beans and spinach.

This one calls for a simple list of ingredients, many canned or frozen. I used to hate that kind of stuff, until I worked in a "gourmet" kitchen and learned the benefits of careful cheating. 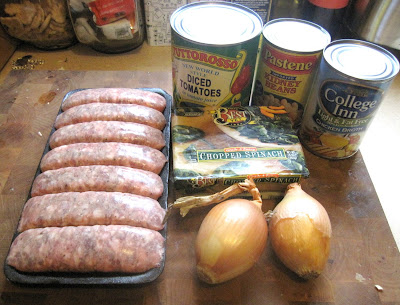 One package of sweet Italian sausages, two small onions, one can of diced tomatoes, two cans of cannelini beans (white kidney beans), one package of frozen spinach, one can of chicken broth.

Star by cutting the sausages into four pieces each, then brown the pieces in a large pot in some olive oil: 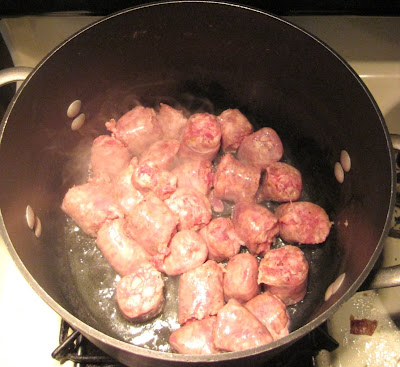 Meanwhile, cut the onions, leaving them in fairly long strips. When the meat is nearly brown on all sides, add the onions, with some course salt and fresh ground pepper, and cook until the onions wilt: 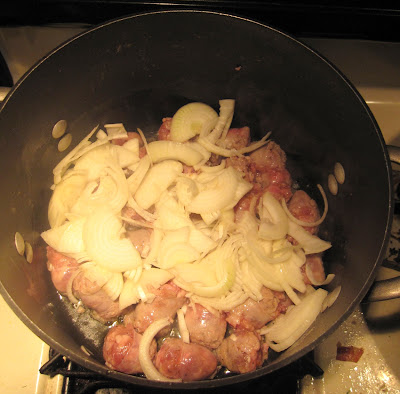 add the beans, along with the liquid from the cans: 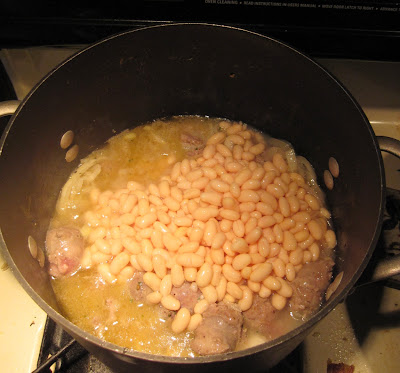 then the tomatoes, and the juice from the can: 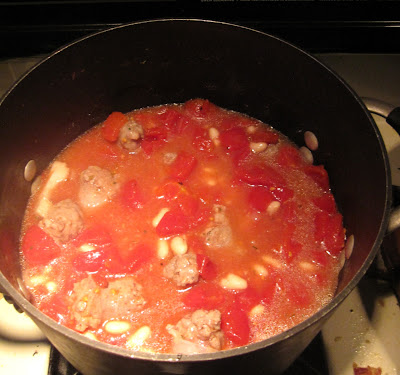 along with the chicken broth, and some water if needed to thin it to the desired consistency. Put the lid on, bring to a boil, then drop to a simmer for about an hour. Add the frozen spinach, and cook for ten minutes more: 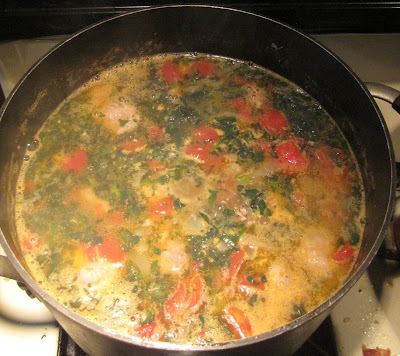 Good soup is all about layering ingredients in the proper order, then simmering. I find it also helps to let the whole thing settle, allowing the flavors to mingle. Soup is often better the next day, but you can achieve this by preparing the soup at lunchtime, before eating it for dinner. 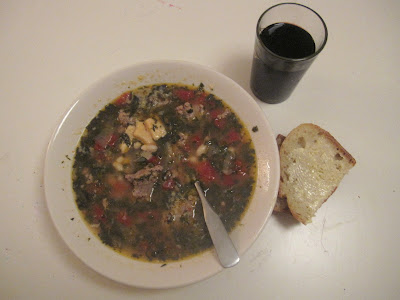 That's my kind of comfort food.

It all sounds great--except for the juice glass. Remarkably, the shape of the glass affects the wine's flavor, and juice glasses just kill good wines.

(See the following two entries at A Suitable Wardrobe to see how Mr. Moneybags wore his scarves.)

The juice glass makes it authentic!

That looks really good. I'm wondering how this would taste with diced chicken breast instead of the sausage. I love sausage, but I'm on a diet. I find that with enough italian seasoning anything can taste sausagy.

Ah - I love stuff like this - the finished product looks fantastic! I also have a food blog at http://dadcooks.wordpress.com

Thanks for posting - With a name like Giuseppe I'll bet you have great recipes stored away. Take care - =Paul

My wife and I had a version of this for dinner on monday, but we swapped the spinach for fresh escarole. Pretty great.

I'm gonna try this with grits instead of beans.

Thanks Guiseppe. Recipe saved for the day I find salsiccia in my city.

Regarding the juice glass - that brings back memories. My wife's family is Sicilian and live waaaay upstate NY - Watertown. They used to make wine from Welches grape juice, and they would serve it in those small prepared shrimp cocktail glasses. This was after Mass on Easter sometimes. Thanks for evoking the memory. =Paul

Actually, I thought the wine-in-a-juice-glass was a nice touch. Unless you're sipping a $300 jug of Gaja, most "inexpensive" wine goes quite nicely in a cup. It is, after all, just wine, folks.

I spent a number of years as a fine wine and gourmet food buyer. As an Italian kid, I grew up with a near religious regard for cooking, eating and wine.

My first, and for years only, experience of wine was Carlo Rossi, in juice glasses, from the gallon jugs. Belive it or not, it's that very experiance that made me a good fit for the wine trade, because it taught me that snobbery about it was just so much bull.

Like I used to tell my customers when they would feel intimidated by wine and chees and all that: it's all just so much spoiled juice and rotten milk.

Well, I'm not sure Carlo Rossi would be harmed or helped by the glass it's in ;-)

My grandfather liked Carlo Rossi, and I drink Two-Buck Chuck, so I hope I'm not coming off as a wine snob. But I do use wine glasses for wine, and I can taste a difference based on drinking vessel--at least sometimes.

I like your chianti. Smelling it now. Next time I'll try the sweet italian turkey sausage. Once I've lost about 10 more lbs I'll switch over to the real thing.

My wife has added your dish to her menu. Looking forward to trying it.

Also, my wife is making blue/white seersucker bow ties for 10 or so of our internet buddies. If you'd like one, let me know.

If thats Italian Garibaldi was into scrapbooking.

I believe Garibaldi spent years as a candle-maker on Staten Island. I am willing to bet you he ate sausage soup and drank whatever he could get. Mussolini seemed to be the one with the dangerous scrapbooking hobby.

sausage soup is one of my favorite "cheap" dishes. i am so happy to see that it is so easy to make and it looks great! thanks, i will try it, although it's too hot for soup these days in Tel-Aviv.

This looks delicious. As for the wine glass...my wife has family in Italy and we always drink out of juice glasses. Difference between wine as food and wine as something special and ethereal (I incline to the former view).

Going to make this tomorrow. Thanks for the recipe.

Trying now, simmering as we speak, we added some fresh garlic and red-pepper-flakes.
Looking forward to it! Thanks, now I gotta dig out our juice glasses somewhere...
Best,
EVT

This is one of our favorite meals! we cut the sausages into eighths, add garlic, smokey Tobasco, and Tony Chachere's seasoning.