So, the past few days, if my last post was any indicator, I've been embracing my more fashion conscious side. That's why I don't like to label my sartorial sensibilities...because the instant you step outside the lines, folks get all up in arms.

Today was an exercise in cheap luxury: a bunch of cheap gear brought up by a few luxury accessories...which were also cheap, score one for the good guys. 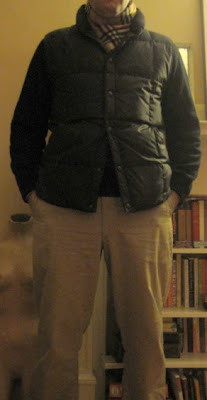 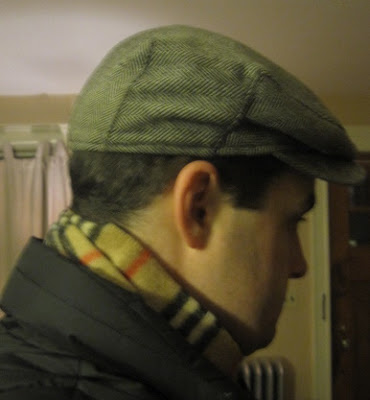 Completed by a grey herringbone driving cap I bought eight years ago. 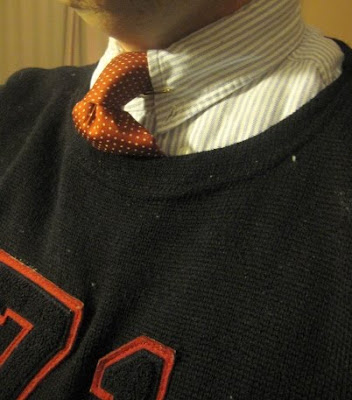 Indoors, the luxury carries through in the tie by Mr. Sid, $0.99, coupled with a uni stripe oxford by Ralph, button down collar pinned in a fit of hopeless affectation. I know, its an egregious affront to a million things, a shameless aping of a trick found on Polo mannequins and in Polo ads...but our boy Fred Astaire was known to be doing it at least 30 years before Ralph launched Polo, and that's good enough for me. I pull this trick about three times a year these days...besides, admit it, this foolish detail makes the outfit, doesn't it?

If I seem to be flexing my less than ripped "fashionisto" muscles today, it's because I can't help it. Old buddy Pasquale and I are traveling to New York this weekend, to visit some ex-patriot Bostonian friends, eat, drink, and attend the Pop Up Flea on Saturday. I'll be traveling in the clothes on my back, plus an extra large tote bag containing a clean shirt, tie, socks, underwear and shaving kit. I'll be honest with you, the prospect of running into Michael Williams, Mr. Mort, the Sart and even Tin Tin in the same place scares me to death, and already has me on my toes. I've been thinking the matter over for weeks.

Cripes, I might as well be a teen-age girl...yikes!

That Flea market is going to be wild. Look forward to your take on it. I think you can hold your own among that company.

That's awesome. I really wish I could go, it sounds great. Have a good time and keep a lookout for some cheap RRL for me.

I am never able to travel without an extra pair of pants, I am far too neurotic.

Have a good trip!

G-
Cut down on the caveats and apologies!
You look great!
Just because Ralph does it doesn't make it bad.
No would mistake you for some sort of unoriginal polo-whore.

That pop-up-flea sounds cool, though years of thrifting have spoiled regular priced (let alone boutique-priced) good for me.
-Joe

I'm very bummed that I'm going to miss the Pop-Up Flea again. I already have plans to go to NYC the first weekend in December and could not change them.

If you talk to Michael Williams, ask him about the possibility of doing one in Boston.

Last year I went on Sat and didn't run into anybody. I think the big shots were still in bed with Hi Life hangovers. One of the vendors got a little testy with me when I took some pics. People firing away with cell phone cameras were ok but when I whipped out the D70 he got confrontational. Maybe if I had a business card...Your cards are brilliant.

I love the varsity sweater. Looks like Princeton colours...What's the year ?