Black and Blue All Over

I worked in a men's shop in the nineties. Mostly our stuff was pretty good, but there were exceptions. Chief among these was the abhorrent black blazer. Just like our navy blazers, brass buttons and all, only black. Especially awful was the 6x1 double breasted version...unforgivable. I hated them then, and my mind could not be changed, until...

I came across an exquisitely made, early 1960s vintage three button blazer, in black flannel. I could feel an old hatred welling up inside me, but this jacket surpassed all that. It confounded me, because as much as I felt I ought to hate it, I actually had to have it. Call it fate. 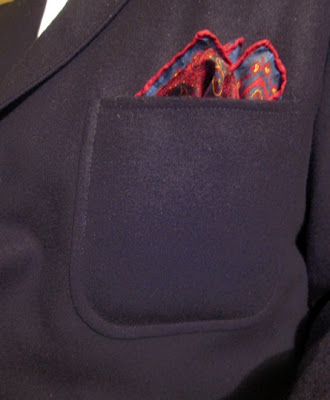 What really sold me was the open patch breast pocket. It's a detail I find absolutely irresistible in a casual jacket 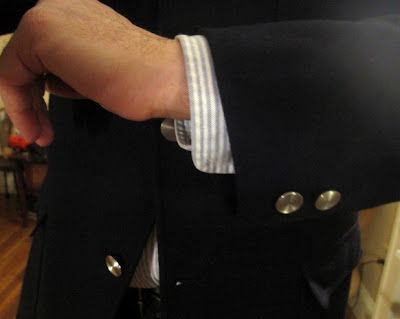 The buttons are silver, which is probably kind of cheesy. I might swap them out for braided leather, maybe, I don't know. In any case, I think this jacket worked pretty well against an outfit comprised almost entirely of blue, in this case dark jeans and a university striped oxford.

It's a conundrum, really, this black blazer. Two days ago, I tried it out with grey flannels and a white shirt with pink stripes. But it was all wrong, reminded me why I once found the black blazer repugnant. That day, I immediately swapped it for my classic navy blazer, and all was right with the world. The today I tried it with jeans and it was just the thing, which is funny, because jeans and sports jackets often work quite well together, but if you ask me, nothing looks worse than a navy blazer and jeans. I don't know, too dorky or something.

And speaking of dark blue jeans... 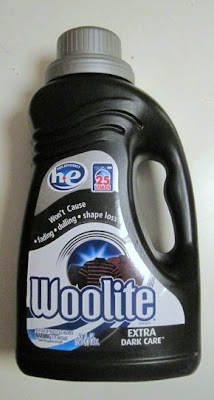 I like my jeans dark, stiff and old fashioned of cut. I do not like to wear jeans for a year or more without washing them in order to preserve them, because that's just filthy. Enter Woolite Extra Dark Care. I ran the Wranglers though the wash, alone, turned inside out, in cold water, with Woolite, then hung them to dry. The results: jeans that are both dark and clean. Go figure.
p.s. watch for this enigma of a jacket with tan slacks and a cream cable knit sweater. That might be just the ticket, too. We'll see.

Those silver buttons look pretty good. If you do elect to swap them out, smoked mother of pearl buttons are worth considering.
-Aaron

One size too small.

Black and blue was my look yesterday, too. There's just something classy about it, in my opinion. Great blazer! Congratulations. (I've heard mixed reviews re. the Woolite for dark wash. It was good to hear of your positive experience. We wear a lot of black in this household, so I probably should try it. Seems a little pricey to me - but would be worth it to hedge off the fading, I guess.)

Yeah, you're probably going to have to replace the buttons. Those silver steel ones cheapen the look of the jacket. I remember seeing those kinds of jackets about 20 years ago, typically worn by the type of guy who would button up his shirt all the way and not wear a tie.

As for the jeans, try hand-washing in a tub for less fade. It's the agitation from a washing machine and rubbing against other clothes (even when inside out) is what accelerates the fading process. So if you want to delay that as much as possible, hand-washing is the way to go. I have 2 jeans that were raw denim when I purchased in late 2007 which get a weekly wearing, and they still have very little fading via this method of care.

I'd replace the silver buttons with brown horn ones. Then you'll have yourself a jammin' rig!

I'm curious what was "off" with the grey flannel/white shirt/pink tie ensemble? With black loafers I think it would look pretty sharp? On the other hand, with lace ups it may come across too "morning coat-formal".

Thats it exactly. I thought brown leather might be pretty good too.

Actually, this jacket could come in a little bit. As you all already know, my photographic skill is, unfortunately, somewhat lacking. Not to make excuses. I'm happy wiht my slightly rotund fatherly figure. I'm getting grey hairs, too.

In future, if those wishing to admonish me for my girth would kindly have the courtesy to identify themselves, it would be appreciated.

Way into the Woolite. It is pricey, but I only use it occasionally to wash certain items. In the meantime, normal stuff gets washed in less expensive detergent. Works pretty good on wool too.

I remember those guys. I think thats why I hated these jackets for so long.

I can't put my finger on it, honestly...it just wasn't working for me.

The Jacket looks like its straining across your body mate.

gonna have to disagree with you on the washing denim thing. ive had my double Rl jeans (wearing a pair now) for sometime now and have yet to wash them. it even states on the inside pocket to "wear as long as possible iwthout washing." i keep them clean by tossing them in the freezer or sometimes outside my window before bed & if by some odd chance i catch a stain, off to the cleaners but NEVER in the wash. my jeans are as dark as the day i bought them and women still love me up close and personal. blazer is amazing by the way, i say mother of pearl as a button replacement.

Re: a hatred of 6x1 double breasted jackets:
I have one. Do you think it is worth getting altered to 6x2?

There is a good tailor here in Seattle that can do hand sewn button holes for $15, but wonder if the shape of the jacket will be ruined.

It was a new suit in 1995 when I graduated college. It fits well, but is totally dated.

I don't think the jacket is straining, it is just his stance. Plus he has lost weight, so everyone needs to quit complaining. He looks fine!

The problem with the buttons isn't that they're silver; the problem is the style of the buttons themselves. I have a navy blazer with silver button, but they have crests with antiquing and look pretty good, I think.

If you wanted to swap them out, burgundy (i.e., "cordovan") leather would be my suggestion.

The black blazer isn't as much of a fashion victim item as the black suit, but is still best for evenings.

I'm not sure why, but the blazer looks like it's a really dark navy, which may be why the outfit looks so good.

G: I love my black blazer. goes with everything. Keep trying it will come to you. The buttons do have to go though.

Your sartorial explorations are always interesting as is this one. The black blazer is a versatile piece – groovy with the jeans and a little harder edge in black rather than navy. A red or pink stripe OCBD would be exceptionally sharp in my opinion.

I agree about the buttons – metal buttons just look so JCPenney, I don't care how expensive they are.

But the length, Guiseppe. It's too short. My prejudice is down to the first finger knuckle. Anything else is too Thom Browneish and that doesn't even look good on skinny guys.

Great combo. A question: why do we never see you wearing cords? When should one wear cords?

What kind of beer is that in the background?? ha ha!

The jacket fits quite well. If anything, the shoulders fall well but still seem a little wide for your figure. That pocket square looks great!

The problem is not your girth, it's your habit of choosing jackets that are one size too small.

Talking about cheap stuff G, well I was in London and got the word from a mate that the 800 dollar suits left would be 20 dollars the day after.Bought two for 40 bucks
That was at the flag store of Marks and Spencer. Will post sometime on my blog THE WORLD on blogger

I too share your hatred for black blazers. I put my face in my palms when I see a guy wearing it. This, however, looks really sharp. Perhaps it's the flannel texture; not as shiny. I agree about the blue blazer and jeans, but what about a blue blazer and black denim? that could be interesting...
I would like to add that my hatred of black blazers does not include a black VELVET blazer, which would be the bees knees.