A Farewell to Summer

﻿As Summer draws to a close, I tend to get antsy to break out the other clothes, the good stuff, the tweeds and flannels. As usual, I got ahead of myself and switched the clothes in my closet prematurely, and as usual, Boston got a wave of Indian Summer, temps in the 80s. Normally, this irks me, because I actually prefer the cooler weather, but this time around, I've accepted our last minute batch of balmy days. 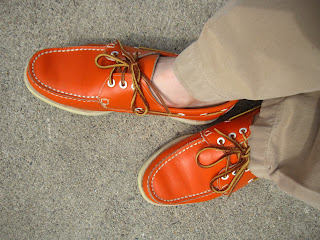 I was recently the recipient of this absolutely killing pair of vintage Quoddy boat shoes. The photos just don't do them justice, because these things are orange, as in Orange, as in ORANGE. ﻿I took these photos in full sunlight at mid day in an effort to capture their truly powerful hue, but it just doesn't translate. The recent litle heat wave gave me a good reason to bust them out a few times before relegating them to the storage box at the back of the closet. So yeah, this time around, I actually welcomed some late September heat. 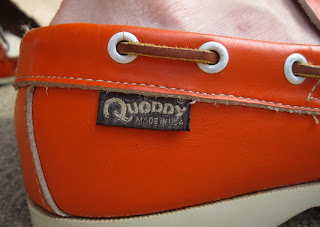 Thomas, a reader of your favorite blog, purchased these on Ebay, but I guess they were just a pinch too small for him, a pinch enough to make them too uncomfortable. He graciously offered them to me, with his best wishes, saying something like "If anyone can pull these off..." I'm forever grateful, Tom, and I owe you one. These shoes are a serious power play. 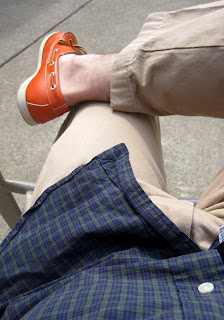 At first you might assume they're a tough nut to crack, but I find them to be right at home in a casual but smart outfit of rumpled khakis and a mini Black Watch shirt, worn untucked over a white tennis shirt. That was yesterday. The perfect rig for one last trip with the children out to Castle Island. You can read all about the place on the link, but let me just tell you that it's one of the best things about living in Boston. Until the early twentieth century, it was an actual island. The tidal flats of South Boston were eventually filled in, connecting it to mainland and creating Carson Beach in the process, and making one of the best places to simply hang out with children that I've ever seen. On Friday, I decided to put on my orange boat shoes and surprise the boy by picking him up from pre-school and heading straight to Southie, as the yokels call it. 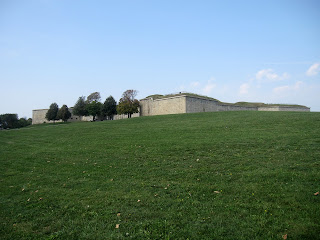 Fort Independence, the "castle" of Castle Island. This imposing granite fort, full of cannons, is a hulk of nineteenth century military architecture. It's a fun tour if you're a history buff, but mostly it's just the cool centerpiece in the middle of a beautiful park by the seaside. There's something nice about a former miliatry fortification serving a second duty as a fun place for children and old folks. 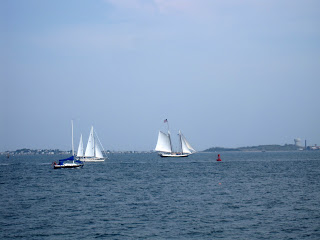 If you're a kid, you could spend half a day just checking out the "Pirate Ships". They're actually old schooners that take tourists out on sailing trips in the harbor. But if you're a 4 year old boy, they're Pirate Ships. Fantastic. 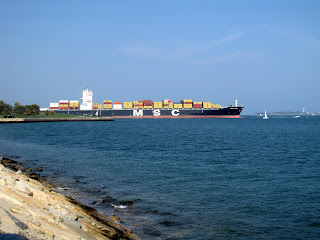 After eating a spectacular junk food lunch at Sullivan's, and spending an hour at the playground, you might be lucky enough to see a gigantic cargo ship leaving the harbor. Even for a grown up, the sheer hugeness of these things is impressive. I asked my kids "Can you believe something so big and heavy can float?" to which the boy answered "I bet it took 100 men to put it in the water". Again, fantastic. 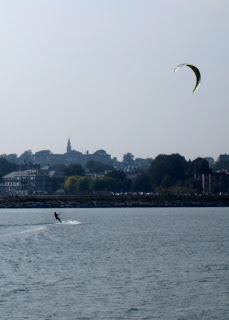 ﻿And maybe there are even some guys windsurfing in the bay, also fun to watch.
Castle Island was a place I loved as a child and it's really special to share it with my own kids. If nothing else, it's the perfect excuse to have two hot dogs with mustard, relish and onions, french fries and ginger ale for lunch...and then, an hour later, you get to go back for a vanilla ice cream cone. I'm not much of a hot weather guy, but as Summer ends I will miss trips to Castle Island....and orange Quoddy boat shoes.
Posted by Giuseppe at 9:33 PM

Do you offer day care services? I'm curious as to how you dress your children. We have been fortunate to be the recipients of many hand me downs but they largely consist of sports apparel. This is not a bad thing as my son plays soccer every recess at school and will wear out his shoes in a month. I can't even make suggestions to my daughter anymore.

If only we had a few warm september days here in the UK :(
Great shoes!

Yeah, we have had the same heatwave down here ... we got about 3 days of fall weather before it turned hot again. Yesterday, at Free Fest, I was able to rock the my old stand-by straw hat (for probably the last time this year).

I know the feeling of wanting to pull all of the tweeds and flannels out of storage. Part of it for me is that summer clothing is so flimsy that it never lasts, but tweed---tweed is with you for a lifetime. All of my tweed jackets are old friends.

(The newer tweed jackets may not yet be old friends, but I know they WILL be, someday.)

Weird that they look more orange in your photos than in real life. Maybe it's because they burn out the retinal receivers for that particular color spectrum or something. They're like miniature suns for your feet.

Put those Quoddys on a high shelf, and see if the famous Sockeye jacket tries to swim upstream to them next fall

Orange will work for Autum.
Keep the Quoddys handy.

Thems is some oh-range shoes!

We've been having our usual Actual Warm Weather Time (which never, ever comes during the Season Formerly Known As Summer), so I took my eldest to the beach, too. Great fun--and jellyfish, too!

Those Orange shoes are fantastic!
The only way to wear a boatshoe IS sockless, It's a bit shocking to see a white sock sticking out like a sore thumb
From the bottom of you're pants..
In California we go sockless almost year round, I would love a pair of Orange boats..

That's no white sock, only my pasty white bare ankle.

@ G-
Hahaha! Oh, I wasn't referring to you about the socks, I know you do it right sir!
I was just speaking in general about when I see a white sock with boatshoes.
I may have worded it wrong....
My bad,
Cheers.

"In California we go sockless almost year round"

Speak for yourself! Besides, it's only Southern California that has the warm beaches that everyone stereotypically associates with Mexifornia. Further north, the ocean is icewater, and the weather is far from eternally-balmy, to wit:

"The coldest winter I ever saw was the summer I spent in San Francisco."

--attributed to Twain, but not verified as authentic