When I was a kid, my Grandparents would take my brother and I on the subway into the North End, Boston's Italian neighborhood, every Saturday morning. And every Saturday we would get lunch at the Galleria Umberto. In a world where so many things change, so much comes and goes so quickly, it's truly a rare pleasure to visit this place with my own kids, and share something with them that I did when I was their age. (misty eyes...) 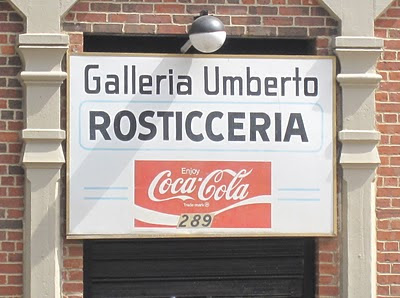 This little sign over a simple metal grate in a brick wall is all there is to announce the place's presence to the world. 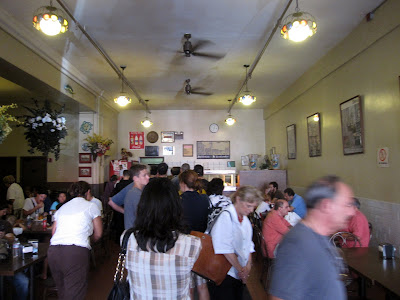 You wait in this line. It was relatively short, meaning, I didn't have to join it outside on the sidewalk, which is frequently the case. Umberto's opens at 11:00 a.m., and closes when they run out of food, usually around 2:00. The line may seem long, but these old guys can handle it, and you'll be eating sooner than you think. 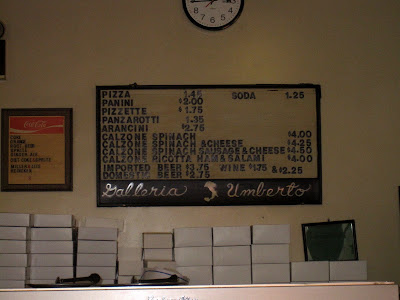 You order from this simple and sparse menu. The prices may have changed, only just a little, in the thirty years that I've been a customer, but the selection has always remained exactly the same. Order anything, it's all delicious, but the arancini are worth committing a crime for. As luck would have it, the last one sold to the young lady in front of me in the line. Lucky for her I was in a good mood, and with the children. 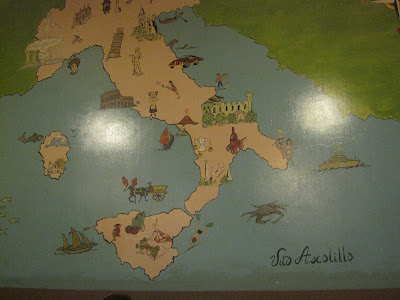 Sit and eat beneath this mural of Italy by Vito Ascolillo (whoever that may be, God love 'im). I loved this painting when I was a kid. 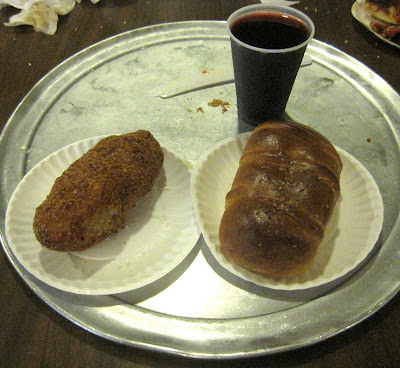 For lunch, one panzarotti (on the left), a sort of mashed potato croquette filled with mozzarella, coated with breadcrumbs and fried, one of what they call panini, a crusty roll filled with ham, cappocola and provlone, and an 8 oz. plastic cup filled to the brim with ice cold red wine, probably Carlo Rossi. Both red and white wines are stored in giant lemonade tanks with a spigot on the front on the bottom shelf of the soda fridge. I've worked in the wine business for ten years now and I know a lot about fine wine, which is exactly why I order this stuff. Because when you're eating Sicilian style street foot off of a dented metal tray, the only correct wine is cheap and cold and served in a disposable cup. All this, plus three slices of their famous pizza for the kids and a can of Fanta orange soda: $11.00. Incredible!
If you live in or around Boston and you haven't been here, shame on you. If you visit Boston and you miss the place, shame on you. Should you be feeling touristy, Paul Revere's house is just around the corner, and the Freedom Trail runs right by it. 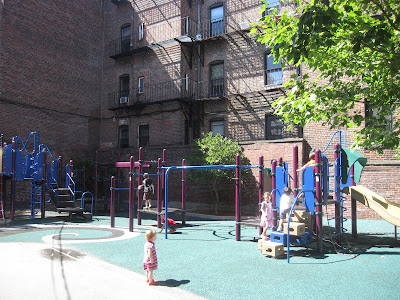 Should you be lucky enough to visit the place in the company of children, there's a nice little playground up the street, behind the Paul Revere monument, wedged in an alley between the back side of two apartment building, a firehouse and a school. It's a nice enough playground, one of these pre-fab jobbies you see everywhere. Nothing special, but the kids enjoyed it. However... 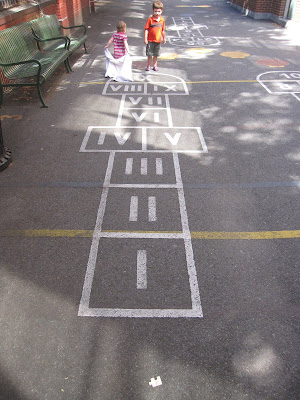 the real score here are the hop-scotch courts. Besides having a mundane "normal" one, there's also one in Roman numerals... 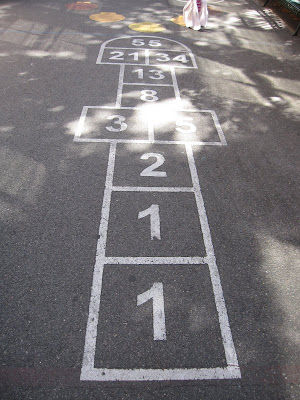 and another in the Fibonacci Sequence. The four square court, which I couldn't get a good photo of because of the tight corner this little playground is squeezed into, has the Golden Section painted on it. Way to celebrate some good old Italian innovation.
The North End may have changed some since the early eighties, but as far as I'm concerned, it's still the real thing.

p.s. I know I've mentioned this place before, but I think it's special enough to carry two posts.

Your first post on this fine establishment inspired a visit during a trip to Boston earlier this year. It is precisely the simple, do-only-a-few-things-but-do-them-well type of place portrayed here, and it's all the better for it. I was about to say it's too bad their hours are so limited - fried mashed potato and cheese balls would make for excellent late night snacks. However to make enough money to continue on in only 3 hours of operation a day (no doubt more in prep time, but probably not enough to intrude on having a life) - I salute them. Thank you for the bit of insight on your corner of the country.

I can almost taste it...too bad we couldn't all end up there after The Top Shelf Flea~~it would be perfect! Nothing like a cold cup of sparkly red wine with pizza!
You should bring Tin~tin when he visits later in the month....
~M

It is always such a pleasure to see the few remaining "ethnic" sections of cities, especially as the world becomes more homogenized and McDonaldized. Although Boston has the fantastic T or MBTA or whatever it is called these days, I always find myself walking when I visit because I do not want to miss the sights above ground.

I've been there many times as well. The GF and I used to live on Atlantic Ave a few years ago and this was a favorite lunch spot.

This place reminds me of any number of eastern NC bar-b-q joints: work until you get it right then leave it alone.

Would that most industries adhered to the same philosophy

Wow! This place sounds tremendous--wish I had known of it back when I used to travel to Boston every year or so. I can't tell you how much I'd like to try a panzarotti. Never saw Galleria Umberto, though I always got by Mike's Pastry which sounds like it's just a block or two away. Mike's made every other cannoli I've had since seem like trash. Familiar with it?

Great post. I live in LA now but man, do I miss the North End. This goes on the list of places to eat on my next trip home.

shame on me. lunch now set though...