It's cold up here in New England, and while many of those around me are busy bemoaning this fact, I embrace it. It's time for tweed and flannel, and by extension, more large plaids. What's not to love? 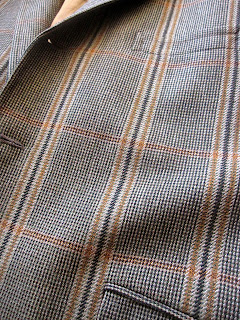 I recently acquired this lovely piece of thick plaid cloth, in the from of a very heavy sports jacket. I wish I had a sofa made of that cloth. 3/2 roll, soft shoulders, no darts, just how I (usually) like 'em. 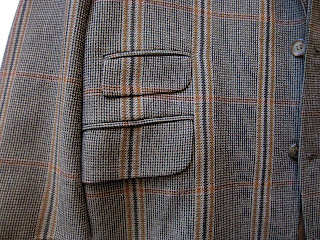 But this jacket is something of an English/American hybrid, taking it's cues from both traditions. Hacking pockets and a ticket pocket, touches from across the pond. I here it gets cold and wet there this time of year too. 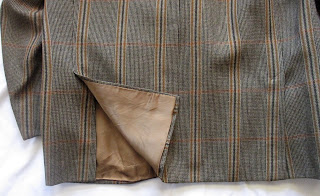 It's even got side vents.  All in all, a nice, slightly unusual, collection of details. 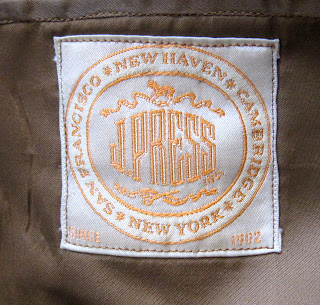 From none other than J.Press, with the elusive rust orange label. $3.49 (plus maybe $20 at the tailors). Dating these things can be tricky, especially with a brand like Press, where so much never changes. In many cases, having San Francisco on the label is a good clue. 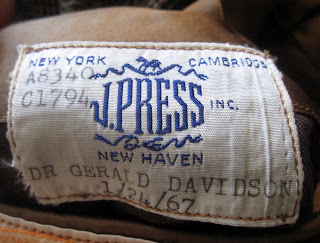 Fortunately, this one is also dated. Gotta love these old type written labels. I'm going to go ahead and imagine that our Dr. Davidson had a lot of teak wood furniture, plenty of Scotch and a hi-fi in his study at home.

It will be a few weeks till I get to trot this one out. Apparently, our Dr. Davidson was a bit more rotund than your humble author, so Mr. Lee will have to take this one in a bit. Not too much though, I need to leave enough room to fit over this: 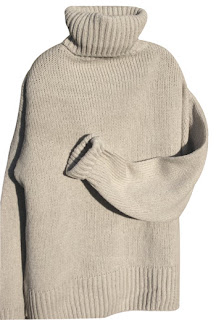 About a month ago, I began to think that a turtleneck sweater might be something I could pull off. Right about the same time, the internet became all atwitter with them. Between his post on the McKenzie Break and another about a plaid jacket, Tin Tin pushed me over the edge. But turtlenecks are a tricky beast. Get the wrong one, and you're well into cheesy/sleazy territory. After looking all around for that I liked, I found this place called What Price Glory, a company that makes reproductions of (mostly) British military gear. Poke around their site. Besides this sweater, they've got some nice looking dessert boots, jodhpurs, and some crazy Black Watch stuff. That's a repro RAF/Royal Navy Submarine sweater, in thick, just slightly off white wool. Perfect.Now, I'm usually loathe to part with full price for anything, but I think $68 for this sweater is plenty fair, especially if it lasts. More on that later. Besides, I just bought a vintage J.Press jacket for less than five bucks. I should be allowed to buy new every once in a while, right?

These two items together, plus charcoal flannels and brown longwings are going to kill. That sweater is going to look mighty fine under a double breasted charcoal chalk stripe suit, or at a Christmas party with tartan pants and a blue blazer.

We'll see how this all pans out, but I'm thinking it's a crime that I've gone this long without a white turtleneck sweater in the mix. Really, it should be a Winter staple.

The late Dr. Gerald Davidson was a Boston psychiatrist who taught at the Harvard Medical School.

The right turtleneck can be a wonderful thing. I have a nice wool one I found at a Brooks Brother's outlet 8 or so years ago. It's very warm, and I only wish I had more opportunities to wear it. I get a lot of complements on it, too.

I think you're safe as long as you don't wear it with a brass button blazer : )

I like the shots of the material but how about a shot of the full garment?

while I'm sure your tailor is excellent, I'm curious...Comparatively speaking, would you consider his prices on the low end?

$20 to take your jacket in seems quite low. Here in LA, I have trouble finding a tailor who charges less than $15 just to shorten a pair of pants.

Wait till I get it back from the tailor.

My man Lee is cheap, good and fast. I'm lucky that way.

I hear these RAF sweaters are scratchy. What's your take?

That turtleneck looks fantastic, but what does one wear underneath it?

Sometimes, in foolish moments, I think I'd swap the wife for lovely thick jacket like that.

How'd they roll that jacket in a typewriter?

It's a special super huge typewriter, designed exclusively for the clothing industry.