Robert Burns, Scotland's favorite poet and bon vivant, was born on 25 January 1759,and has had his birthday celebrated with "Burns Suppers" the world over for over a century. Being an Italian American, I have little reason to know this, and even less to attend such an event. Still, this past 25 January I was honored to be a guest at a wonderful Burns Supper hosted by good friend Yankee Whisky Papa's own club.

So then, how do I come to find myself at such an event? Well...

You may remember that I have this outrageous head to toe tartan flannel get-up. Dear Yankee-Whisky insisted that I attend on the mere merit of this suit, and I happily obliged. Apparently, this suit is not fit to be seen by mortals, as it is nearly impossible to photograph in any way that communicates just how bold it is. And though I wondered at whether it might be a bit gauche for a non-Scotsman to appear on Burns night in both long trousers and Black Watch, the official tartan of the Scottish regiment of the British army, my fears were soon quelled by the actual Scots I know. Turns out nobody really cares, outside of the nerdy world of men's clothing blogs, that is. 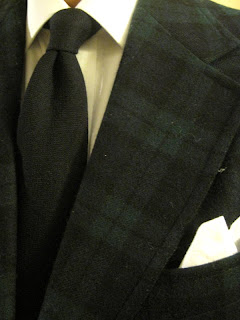 Given that this was an evening affair, I tried to keep things elegant with a crisp white shirt, white square, and navy wool tie... 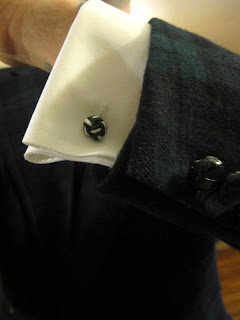 I've never been huge on French cuffs, but I have recently decided that it might be the jewelry that puts me off. Silk knots, in this case green and white, are the way to go. 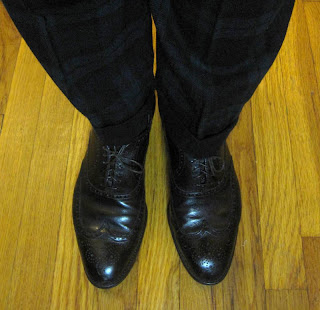 A recently acquires well made, if no name, pair of shiny black closed throat brogues finishes the look... 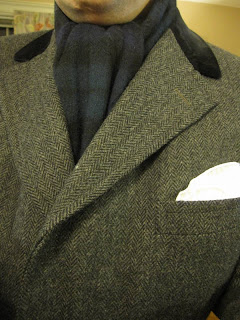 ...while a Chesterfield coat keeps me warm outside. If the pocket square wasn't obnoxious enough, than the matching cashmere Black Watch scarf  certainly was. Yikes, its practically punk rock dress up. Forgive me.
In the foyer stood a collection of old putters and a silver bowl filled with golf balls. We all proceeded to "golf" in the Caledonian tradition inside the building. Start in the dining room by the fireplace, under the tables, out to the hall, into the elevator, up the elevator, down the hall, down a flight of stairs...you get the idea. They were serving plenty of single malt that night, but we managed not to do too much damage.

The serving of supper was announced by the bag pipes. A traditional haggis was served, and all the traditional poetry read. A newcomer to haggis, I found it gamey and "funky", even a bit stinky if you will. But being an old pro in the wine trade, I've developed quite a taste for the various "funks" of the old world. I cleaned my plate. The evening concluded with the singing of Auld Lang Syne (Burns' best know hit) accompanied by handbells. Wonderful. 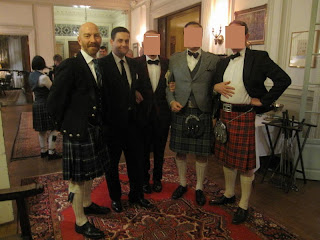 Pictured left to right: James of the great 10engines, in full regalia, you humble author, my new hero R, yankee-whisky-papa, and fellow club member. Call this one "The Lads"...plus one Italian.

Bag pipes once again signalled an end to the festivities. Our faithful piper and new hero R, in black tie with a jacket in Lindsay tartan made on Savile Row in 1972, provide us with the shot of the evening.

You went to a Burns Nicht and didn't capitalize on the opportunity to bust out that tartan black tie kid you have?

A whole bunch of well turned out men in one place. Sounds like it was a fun evening.

Sounds like a good party. The indoor golf would be a riot! (especially with plenty of Scotch)

Now that is the venue for that suit! I'm so glad you're putting it to good use.

Sounds like you had a great time. Here's hoping you have many more to come!

"Turns out nobody really cares, outside of the nerdy world of men's clothing blogs, that is."

On a whim, I sent my great uncle (Campbell living in Inverness) this post to see what his thoughts were. He said "no dago [so-and-so] has any right to wear that, spec. on Our Day!" He went on to blame me and "the rest of you Amicans" for not respecting Scottish heritage.

For what it's worth, I don't think he's been out of the house since the years began with 19. You don't have to post this, but I figured you would get a kick out of it. :)

Thanks for that. As I see it, if you find something for sale in a store, ypu have the right to buy it, and wear it, even if you're a Dago so&so. In any case, I'm not the one tossing around racial slurs, so who's really being disrespectful here.

Zach,
Um...I own a Tartan suit. It got me invited in the first place.

Excellent, G. I really keep meaning to have something made of my family tartan. It's actually in the Register of Tartans, but I think it's pretty expensive to order...

Well, I think that's a fantastic suit. Congratulations on having the nerve to wear it, too!

My son played the bagpipes and the band's tartan was Black Watch. Naturally, we have a lot of Black Watch scattered around the house. Evidently we also have Scottish ancestry, coming from both my mother's and father's side, but it's pretty far back. I like it when people are enthusiastic about their heritage, be it Scottish, Italian, or whatever.

Actually Giuseppe, your friendship is why you were invited, not your suit. The suit was merely a bonus.

As for Italians (or anybody not of Scot heritage) wearing tartans, nobody in America cares... nobody with whom I associate, that is. We let lazy people wear running shoes, don't we?

What did your golf score end up being, by the way? I missed the tally.

now i'm wondering about getting perhaps a sports coat made in my family tartan: forbes. although i have the sicilian surname from my father, his mother was a scot thru and thru. the forbes tartan is pleasant to look at and it would be kinda cool....

Robert Burns Night is a celebration of his POETRY and its not a Scottish-only party. The more the merrier.

Lord, I wish I had a suit like that, and the sartorial knowledge to make it work--and if I ever acquire a suit like that, I will know just what to do. Everything, from shoes to pocket square to tie, was just, exactly, perfect.

If I might, how long did you spend figuring it out? I usually figure out what I'm going to wear each day whilst in the shower--by the time I've toweled off, I have a pretty good idea what it's going to be, misplaced trousers and ties (it happens when you have a lot of clothes) notwithstanding. But there seems to be no correlation between how long I spend pondering and the end result--I'm just as likely to knock it out of the park when it strikes me all at once as it does when I start thinking about it the night before.

Any rate, I am inspired to try one of my trickier sport coats tomorrow: the dreaded oatmeal Harris Tweed. I've worn it perhaps ten times and am batting, maybe, .500. It is an understated wowser that requires a certain taming, but when you get it balanced, it is a stopper. If not, you look like a total dork.

I am prattling. Thanks again for a great show.

Bonnie Prince Charlie, that most Scottish of Scots, was born and died in Italy and, with the exception of his brief but exciting vacation in the Scottish Highlands, lived most of his life there. By all accounts, he was fluent in Italian and French but spoke English only haltingly and with an Italian accent. The bonnie prince was quite the clothes horse and is described in various accounts as wearing a tartan suit of coat, vest and breeches. It was common to mix tartans in those days, so the Prince Charlie's suits may not have been of matching setts. The kilt, however, was working dress for "downy wassals" (herdsmen and laborers) and seldom worn by Scottish gentry before the Victorian revival of all things Scottish.