The Boat and The Bank (a tale of relativity)

Thrift shops are frequently chaotic places where any sense you have of relativity needs to be suspended if you're going to be succesful. It can be almost an alternate reality that requires an alternate set of rules. To illustrate the point, lets talk about two pair of shoes I recently acquired in the same shop on the same day: 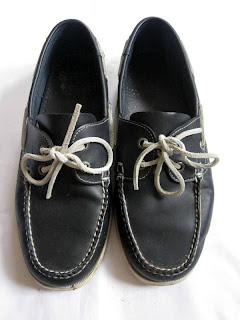 The first is this pair of navy and white boat shoes by L.L.Bean, $14.99 in barely worn condition. Made in El Salvador, of leather that is not the greatest quality, having a bit of a plasticy finish. I might be disappointed in them had I ordered them new for full whack, but for what I paid for them, they're a useful Summer shoe. I know I'll wear them frequently with madras pants and shorts. Just the other day I wore them with khakis, a university striped shirt, rubbon belt and navy blazer. 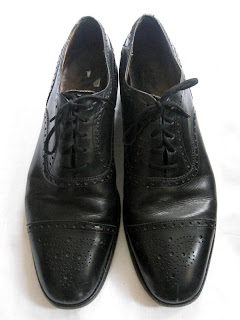 And then there's these: bench made in England by Church's, the leather is indescribably soft and pliable; $6.99. For half the price of the boat shoes, I got a pair of truly fine shoes that would have sold for nearly ten times as much new. Or, to be mathematical about it, the boaut shoes were 75% off retail, wnd the Church's were 98% off retail. You see, it really is all relative, even if that relativity sometimes works backwards.

-Speaking of shoes, I just added several new pairs in the Shop, among them this knockout pair of Crockett and Jones monk straps. Plenty of other new items coming over the weekend.

-Those of you waiting to hear about the vintage tail suit I mentioned a while back, I haven't forgotten, its coming soon. Photos are up at Facebook if you want to go over there and drool over it.

-My custom suit from Imparali Tailors arrived in the mail this week. More on that at the beginning of next week. Short story: it's good.
Posted by Giuseppe at 9:58 AM

I meant ten times as much as the boat shoes, which retail for about $60. My apologies for the ambiguity of that sentence.

So, I guess the moral is that a good thrifter spends carefully and doesn't swoon over a find just because it's a big discount off retail. Those boat shoes are a good find compared to retail, but not compared to the Church's. You have good use for the boat shoes, but nobody should consider them a great score.

If that's the point, that makes sense.

I find that if the people at the TS don't know what it is, they tend to mark it low. I have a ton of copper pots that I'd pay a few dollars for, while there would be an old teflon pan for twice as much. So the people at this TS recognized LLB, but not Church's. Lucky you!

The boat shoes are barely worn, and generally, the better the condition, the higher the prices at thrift stores. So yes, they are a significant discount off retail, and yes, they are a score.

On the other hand, the Churchs are clearly used, so are not expected to be priced as high as something in better condition. I'm sure that a pair of Made in Dunghillistan corrected grain shoes in the same condition would be priced the same.

As Pigtown Design pointed out, the people at thrift stores tend not to know what things are worth on eBay, which makes really incredible finds like this—about 1% of the retail price for the highest-quality goods—few and far between. Finds like this are part of what make thrifting such an adventure. (I recently scored a pair of Brooks Brothers gunboat longwings for three bucks, which is as good a deal as the Churchs, if not quite the same league.)

Then again, there are the thrift stores where those who run it just don't know the market, and ask far too much for their goods. I think they're basing their prices on retail prices, rather than local thrift store prices. It's our responsibility to help them, and ask them for realistic prices—for their sake and for ours. No one benefits when a thrift store closes due to poor sales.

Church's for $6.99, that's amazing.
you'd never find them that cheap over here in the UK.