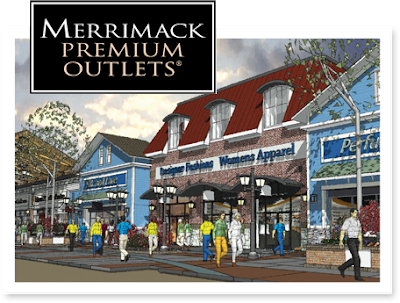 Architects rendering, lifted from the website of
the Budweiser Brewery in Merrimack, NH

Recently, a large number of my shirts have been getting frayed at the neck all at once. I don't mind (more than) a bit of wear and tear on my clothes, and even embrace that thrifty Yankee habit of wearing things well past their expiration date﻿. It's helpful when all you own was owned before to have a romantic justification for the fact that your stuff is basically just worn out and, you know, old. However, with a few extra bucks in the bank account, I decided some new shirts were in order. Being the consummate cheapskate I am, I headed not for a reputable retail store, but to a favorite thrift shop forty minutes North in New Hampshire. Please don't think I'm being a snob. I desire new things as much as anyone. It's just that over the course of so many years of thrift shopping and being a skin flint, I tend to stay away from the places where new stuff can be had, and then it takes a chisel to separate me from my money.

Along the way, I noticed a bill board for  Merrimack Premium Outlets, just another ten minutes up the road from the thrift shop. I immediately figured being a new outlet mall of "premium" brands, there must be a Brooks Bothers and  Polo store there. Those two brands don't miss a trick, especially when it comes to appearing high end while dealing low end. I suppose I do the same thing, no cracks please.

The trip to the thrift shop turned up nothing in the way of shirts, though I did get a pretty good pair of forward pleat brushed twill chinos for $3.99, by none other than Polo (of course). Afterwards, stationed in a booth in the McDonald's across the street, while my children ran and screamed in the Playzone, while parents shivered in the ice cold air conditioning, I looked up the outlet mall, and sure enough, Brooks Brothers and Polo were both on tap.  Having just bribed my poor kids with junk food, I decided to subject them to some straight up American retail shopping, something they are not used to when in their father's charge.

I suppose when we passed a huge complex of a place, some sort of factory, belching smoke and steam, looking like a relic of the late 1960s, not in a good way, that turned out to be the outpost brewery of Budweiser, I should have read the omen and turned tail. Make of that what you will.

Upon arrival, I found the immense sprawling parking lot so bursting with cars that men in orange vests were directing traffic with dayglo wands...and still I refused to read the writing on the wall. Apparently, it was some kind of holiday this weekend, the kind with big sales or something. Having worked in retail so long I never enjoy these three day weekends. Having avoided shopping retail so long, I forgot the ugliness that is a massive American "Sale" holiday. I can only hope to forget it again soon. Bodies everywhere, children whining and screaming ( my own included), people laden with bags and bags full of brand name goods they almost certainly don't need, all of it under a cloud of false superiority lodged firmly in the overt labels stuck like glue on the surface of cheaply made, wasteful goods.

Eventually, we found a space and I dragged my none-too-thrilled into what my five year old son called a "fake store town" and located the Brooks Brothers store. There were plenty of shirts, all non-iron. I'll wear non-iron in a pinch, but I'm not about to pay $47.50 for it. Finally, I found a small display, practically hidden in a corner like a bastard stepchild, of thick oxford wrinkling cotton shirts in white, blue, yellow and pink. For a moment I was happy, and ready to buy, before I realized the only sizes available were 14 neck and 17 1/2. Tiny and huge. I guess average sizes like 15 1/2 go quick in a holiday shopping 25% off frenzy. Or something.

I found a Brooks Brothers employee, a fine fellow ten years my junior dressed in puddling long charcoal slacks and a huge non iron button down, open at the neck with no tie. I asked him, already fairly certain of the answer, about these old oxfords that unfortunately seemed so incongruous in their native environment if there were any others besides those on display. He immediately began to actually apologize for the fact that these shirts were not non-iron, as though he were embarrassed for me that I should ask about these, of all things. "We probably won't carry them much longer" he stated, then proceeded to compliment my "ink" and tell me all about his. Ugh.

The whole time, my kids were tugging at my belt, talking at the same time, fighting with one another, running and throwing themselves on the floor. All this among wall to wall people consumed with materialistic avarice.

I did get some nice socks, though.
Posted by Giuseppe at 9:25 PM

Don't feel bad Mr G. Outlets have become a joke and a genuine waste of time. You're better off shopping at Macy's at the end of season sales w/ coupons or better yet at TJ Maxx or Marshalls. At least they're usually in town. Outlets are...just a waste of time. Bargains are NOT readily available; outlet stores are just another outpost of for the retailer where they can sell overstock at a modest discount or where they can produce lower quality items for sale at a huge markup. Did I mention they're a waste of time?

Ever since "brands" started making lines expressly for outlets I've found that "factory outlets" are pretty much a waste of time.

I still remember the good old days when my mom would drag us down to New Bedford for real factory outlet shopping.

The Polo and Brooks outlets are monstrosities. Having been to genuine Polo and Brooks stores, I've never expected THAT much from the outlets. Yet, when I visited both outlet stores for the first time last year, I was beyond disappointed. What kind of deal are you getting when most of the products offered are of lesser quality? And the standard quality stuff? I can find better prices at a Macy's clearance sale.

Having travelled for years with a lady who was hooked on a particular few brands, I have a lot of experience with the "Premium Outlet" situation. You didn't miss the "good old days", there never were any.

There did used to be places, usually called "Oops!", "Goofs", or the like, that sold new higher end seconds, but I haven't seen any in years. I suspect that Ralph, Tommy, et al, figured out they were revealing too much about their cost-to-price ratio

Most hilarious. I could almost physically see that youth in the puddling trousers and baggy shirt. It's a travesty what brands trying to make quick money by having outlets will allow in the name of sales representatives. It further cheapens the once-good reputation.

I think I might have learned my lesson. I will only go to a sale if I can get there in the morning and I limit myself to two a year. Chasing 'bargains' among thronging people is such a soul-destroying experience.

I spent Monday lollygagging about the manse, and topped it off with a visit to the "new" park (i.e., one we discovered recently while out for a walk). Playing "monster" with the kids is much better than their becoming monstrous.

Non-iron are practical for those stuck in uniform work suits & shirts... aspiring to afford the $7/shirt laundry bill with each wear (which isn't bad given the 10 minutes I spend ironing a shirt), or who are on the road and tired of the hotel -- even the "best of them" -- losing a shirt (it looks like mine... but the sleeves and neck suggest it couldn't have ever been...)... The new stuff is soft, breathes, wrinkles just enough... No matter, the kid was right: they won't have that old stuff in another 6 months.

Polo is a lost case gor those of a trad sensibility. It no longer has the vocabulary of authenticity at play... it has become an eye-sore logo shocker. It is, in a word, perfectly suited to another audience that speaks a new language. I think it will do very well but we shouldn't pretend it is something else.

We sure do like finding a bargain, don't we? Even though it isn't really a bargain at all, more like a bargain with the devil.

Supposedly, one of these premium outlets is opening not more than 15 minutes from where I live. Despite the horrible traffic it will create, I am exited to not have to drive over an hour to purchase socks. If that is not the type of thinking that allowed these outlets to flourish in the first place I don't know what is. Inane American shopping mentality in a nutshell.

I have had good luck with JosBank Executive Collection pinpoint oxfords. Very sturdy and have worn like iron, either laundered or washed and ironed at home. And a bargain when on sale for $19.99!

This is hilarious. I stumbled upon your blog and this post. I just got done (yesterday in fact) from a grueling expereince at an outlet mall. With my two screaming kids to boot. Me and my wife both agreed that that won't happen again.

Also had the same reaction at the Polo store. A real disappointment. "Let's see if we can stock the entire store with LOGO'd items".

I will be purchasing goods from actual stores from now on.

I wonder if maybe the real factory outlets followed the factories overseas? Deep discount Malaysian non-iron shirts a few miles down the road from the Brooks shirt factory? :) I know there's a small outlet in North Carolina by their U.S. shirt-maker.

I want to go to a men's clothing store, here at a outlet mall, in San Diego. I would love to to get a new outfit.