Last week, it go warm enough to forgo an overcoat in favor of a heavy sports jacket with a sweater, scarf and gloves in the bag for later. So I wore this: 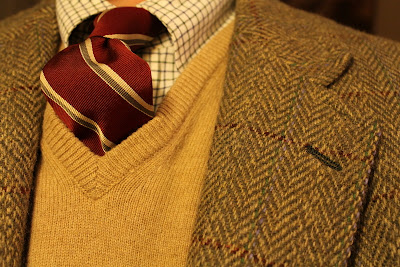 It's an outfit I like well enough, comprised of good components. And while it did suit the weather just fine, it didn't feel quite right. So much brown, 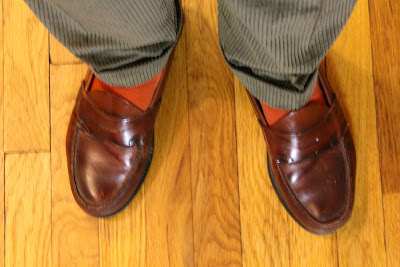 and the combination of olive cords and rust socks....too Autumn. While the the fabrics and weights are perfectly right for the weather in which I wore them, nothing about it took hold of the sunshine or looked forward to warmer days to come. 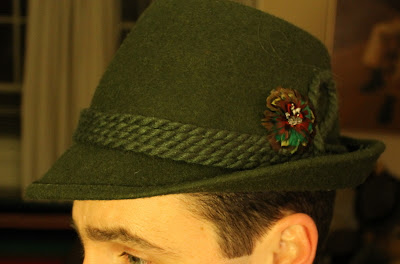 Even the Tyrolean hat is feeling, how do say, "over".

Two days later, the same weather gets another shot, only this time the impending onset of Spring begins to make itself felt, if only a little: 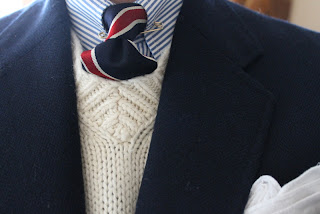 A heavy jacket and sweater combo still keep me warm, only this time it's a navy blazer, and the sweater is off white silk. Brighter colors in the shirt and tie are a bit more cheery. 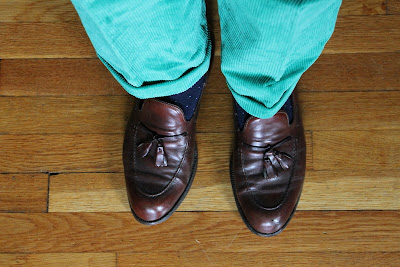 Wide wale cords and loafers are still in effect, but there's a mile of difference between kelly green and olive green. Still cautiously warm, still carrying a scarf and gloves in case, but this time looking forward rather than back.

Even though it still gets cold enough for the heavy Brooks Brothers Gloverall duffle coat, I can't help but swap the tweed caps for a baseball cap on a casual, knock-around day. 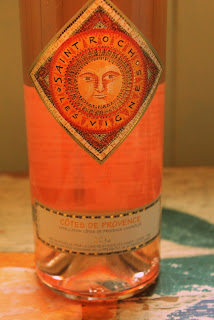 And though it may be snowing outside as I write this, I did go so far as to enjoy the first new pink wine of the season.

p.s. tons of great new neckties in the Shop.

far be it from me to criticize your attire, but from my point of view, that heavy tweed jacket&sweater vs. loafers seems a bit unbalanced. Heavy brogues might have been a better alternative.

Same with the dufflecoat. I think, I'd prefer boots to keep the balance.

In outfit No.2 the tie is exactly the same as my school tie from long ago! I really like the tie in the first combo too.

I want to second Mike in reference to the shoes, they do look a bit lightweight for 'heavier' clothes. I know Italians like to wear dainty shoes though ;)

G-man,
Isn't that Tyrolean a bit small for you?

Nope, fits fine. But it is a bit difficult to photograph a hat on your own head.

In Boston, loafers with tweed are practically de riguer, penny or tassel. Always have been.

Nice togs - but must say, I had the same as response as Mike and Roger regarding the shoes. (never mind that your fellow Bostonians are daintily shod -- cords and heavy clothes generally look better balanced with a good old pair of clod-hoppers!)

Is guess I just don't find penny loafers and tassel loafers all that "dainty".

I could go through the life archives to find numerous examples of the untouchably holy Ivy League College Man in the Early 1960s wearing loafers with tweed, but I'll leave it to you.

Seriously, cords and loafers don't mix? This is news to me.

Are we to assume that your iron has died on you which is why you haven't provided us with the long-awaited review?

To all who are not in the know: Loafers with tweed are indeed de rigueur here in Boston.

Can I assume the "nauseum" commenced fairly early?

I continue to enjoy this space. Thanks for the good work, G.

Heard it twice today already, both times on the radio in two different thrift stores.

Thanks for backing me up in the shoe/coat combo controversy. The iron's fine,I'm just lazy and a bit negligent.

Giuseppe and Bean have got it right!

Look likes you are getting ready to throw off winter and welcome in spring. Will you be going with any madras or seersucker this year?