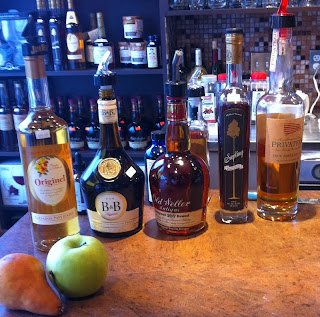 Many of you know that my "day job" (which actually occurs from 3-11pm most days) is working in a fine wine shop. I generally take care of the gourmet food department and offer wine advice. But in my capacity as the teams "utility infielder" I occasionally conduct a cocktail tasting.  The most recent was last Saturday, and we've had a few requests to share the recipes online. I thought this was as good a forum as any.

This recent tasting featured three cocktails perfect for Autumn. Two were our own takes on old classics, one just a direct old classic. Apple, cinnamon, and maple featured heavily, but in a more understated way than the all-too-prevalent-pumpkin-spice-everything fiasco that has gripped the United States this year. The recipes that follow require few ingredients and are relatively simple to prepare, not unlike the best cooking. And, not unlike the best cooking, will leave your guests with the impression that you are some sort of culinary superhero, even a "mixologist" ( read: good bartender), if you will.

Combine ingredients in a cocktail shaker full of ice. Shake well and strain into a cocktail (martini) glass. Garnish with a Luxardo Maraschino cherry. Think of it as something of an "Apple Manhattan".

Combine ingredients in a glass off ice and stir until chilled. Strain and serve over fresh ice in a tumbler, garnish with half a candied walnut. (note: cinnamon simple syrup is easy to prepare. In a saucepan, combine equal measure sugar and water with two or three cinnamon sticks. Boil until the sugar is dissolved. Discard cinnamon sticks. Keeps ins the refrigerator up to one week)

Combine cider, spices, and a healthy drop of  maple liqueur in a sauce pot or kettle and heat to a steaming simmer, being careful not to boil as this will result in a bitter drink. Serve in a mug or coffee cup with a good helping of Privateer Amber Rum (or other suitable rum/bourbon/brandy of choice) Bonus points: your house will smell fantastic as guests arrive. Best served from a punch bowl or crock pot.

You see, there is a bright side to the falling temperatures aside from being able to wear tweed and flannel. You get to have a cocktail party just so you can serve drinks like these.

I thought you were a starving architect who was struggling to build a wardrobe in excess of his wages, like me.

I've never been able to get in to brandy, but that hot mulled cider sounds delicious! It shall be making an appearance at my next party. Thanks for the recipe!

Apple and Maple Bitters, eh? Any recommendations on kinds / sources?

Usually when I see cocktail receipts on blogs they seem horrible. These sound great. Thanks for posting.