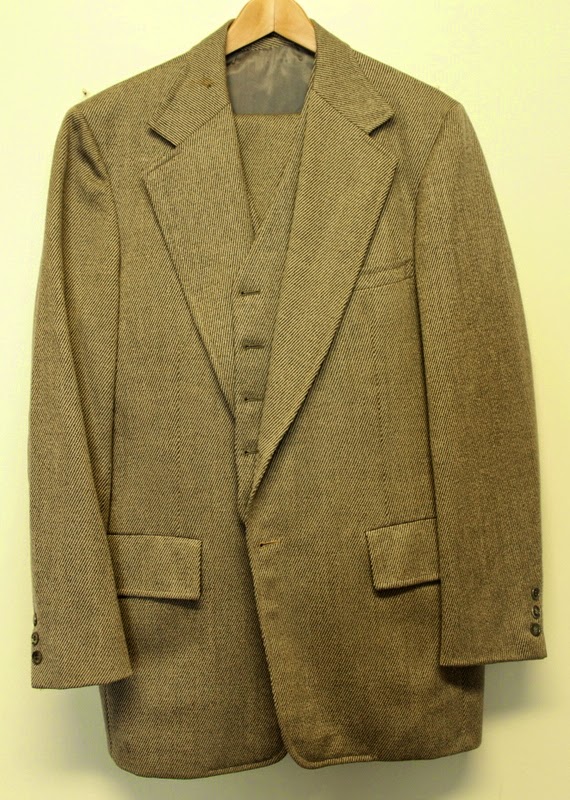 Pictured above is a three piece suit in cavalry twill, the most recent addition to my own Affordable Wardrobe. Heavy cloth like cavalry twill my not be the very thing we want to talk about this time of year, perhaps most especially on the heels of my last post about seersucker suits, but it bears discussion here as this suit goes to illustrate not one but three of the basics tenets of successful thrift shopping. Before we delve too deeply into that, let's have a closer look at the suit itself: 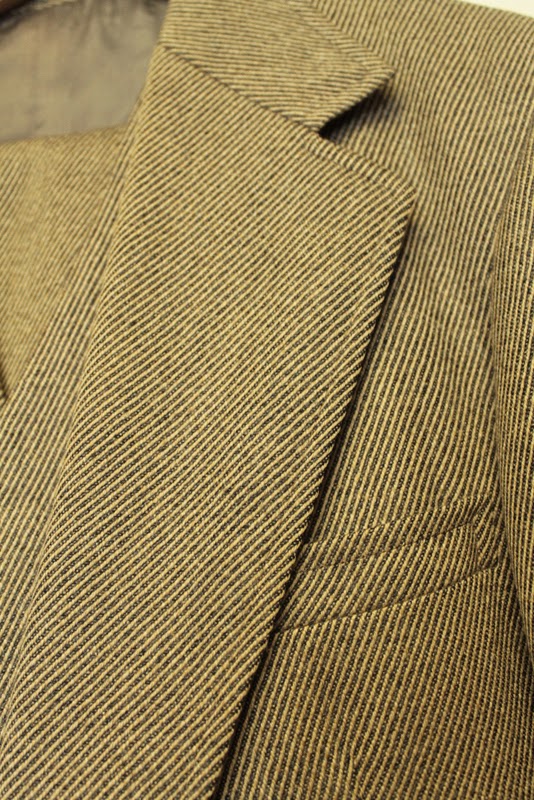 For those that may not know, cavalry twill is heavy wool cloth with a pronounced diagonal weave (twill), usually seen in shades of tan, brown, or olive. As with so many things in menswear, it's origins are military. As one might guess from its name, this hard wearing cloth was first developed for the British cavalry, hence it's frequent use in colors that also derive from the military. Think of it as the big cousin to khaki chino, also a military twill fabric. As such, it's traditionally what we might call a "country cloth", most at home with wool ties and thick brogued shoes. This suit is an excellent example of the cloth, just as thick and heavy as you please, in a classic color comprised of a combination of tan and grey threads woven together. Welted edges and seams are an appropriate detail. 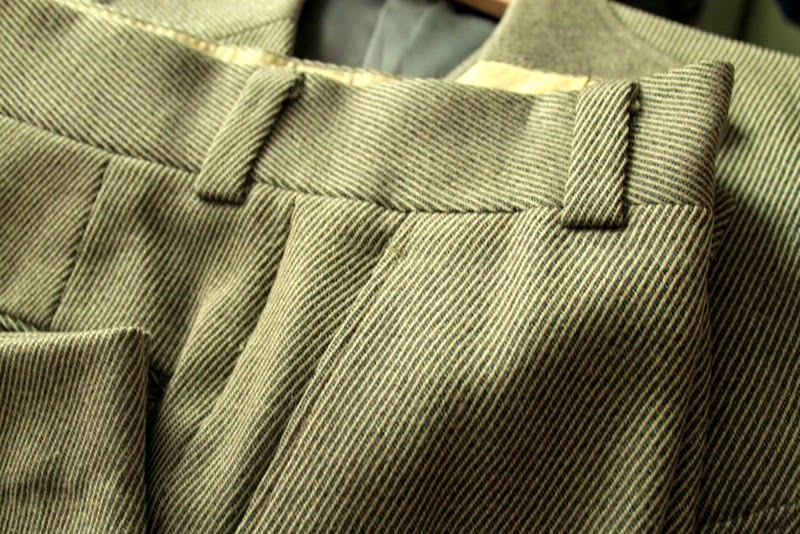 Dating from the 70s, but by no means dated. The lapels and pocket flaps veer just this side of wide, but the only tough detail is the wide belt loops and waistband. Fortunately, there is no flare to the trouser legs, which are cut in a fairly classic manner. 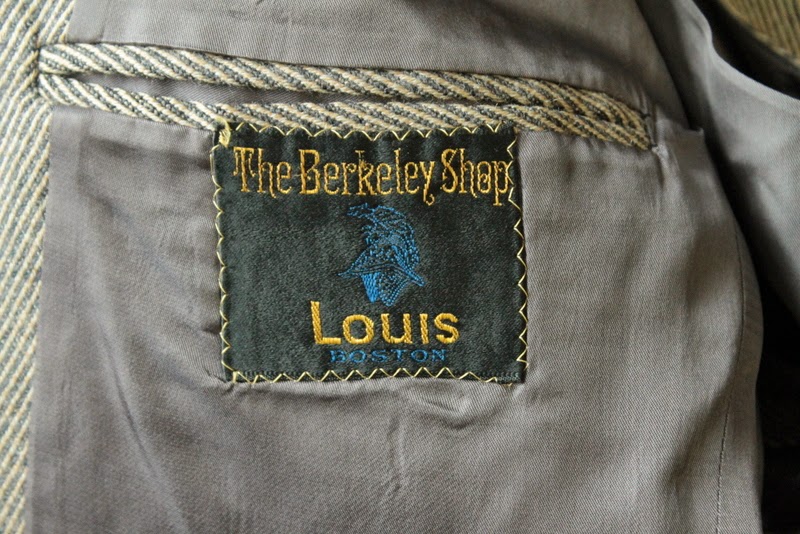 Louis Boston is a well known high end shop. These days dealing mainly in the more expensive Italian lines (Zegna, Brioni, Kiton, etc.), in the 60s through the 80s they also ran "The Bekeley Shop". a store-in-store that dealt in more traditional Anglo-American clothing.

As I said, this suit clearly illustrates three of the most basic principles of successful thrift shopping. The first point is the easiest to state: buy it when you find it. Here in Boston, it's only just gotten warm, if not hot, outside. After escaping the grip of an especially long a cold Winter followed by a relatively chilly and grey Spring, we're all more than happy to reject the heavy stuff in favor or madras and seersucker. But it just so happens that I found this suit yesterday, and it would be foolish to leave it behind simply because it will be months before I get to wear it. Conversely, I bought my best madras jacket in the middle of that very same long, cold Winter.

Secondly, this suit is the result of hard core thrift perseverance.  I managed to reunite all three pieces from separately around the store. I found the jacket first, and was about to take a pass. A few minutes later, the vest turned up elsewhere in the store, and I realized the jacket wasn't just a jacket, but part of a suit. I took those two pieces to the pants section, where I then found the pants. I took the time to put them all together on one hanger, and paid suit price rather than three separate prices for each, though even at that it would have been crazy cheap. This cost me $14.99.

Thirdly, it speaks to the fact that thrift shopping takes vision. This suit is from the 1970s, but really the only "bad" 70s detail here is the wide waistband and belt loops. Truthfully, this isn't much of a problem anyway, since the suit is cut right and the pants are high enough that the entire waistband is covered by the vest, as it should be. Still, I plan to put in brace buttons and remove the belt loops, perhaps even have my tailor build buckle side tabs, thereby removing the only offending detail.

You see, being a full blast professional cheapskate is not as easy as simply rolling into the first thrift store you see with a dollar in your pocket. You have to know what you're doing. It takes vision, patience, and a lot of effort. Luck has only so much to do with it.

I've got a suit in the same cloth, but I'm not convinced it's calvary twill. I think it's a form of Shetland tweed. Tweeds sometimes have a pronounced diagonal weave. Is there any way to know for sure?

Hi. I love this suit and have been looking for one exactly like it forever. I hope we are the same size and you'll consider selling it to me when you're done with it.