Reader Questions : Darts or No Darts? 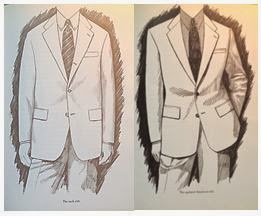 (from "Clothes and the Man", by Alan Flusser)

Curious, do you have an opinion about darted vs. non-darted jackets?  And for that matter,..how about sack suits vs. updated American cut suits?

Simple as this question may seem it's actually quite a good one because it cuts right to the meat of the detail obsessed world of #menswear, and let's us talk about which details really matter, and why.

As anyone who reads this blog can easily guess, my own sense of style leans heavily toward East Coast American traditional clothing. However, I also have a deep appreciation for British tailoring. As a result, I tend to shoot for what I call an "Anglo-American" approach to dressing, combining elements of each school of thought. I appreciate Italian tailoring as well, but despite being Italian myself, tend to shy away from it, as it doesn't really suit my figure or lifestyle.

For those who may not know, a dart is a small partial seam that runs up the front panels of a jacket from the pocket to the chest, giving the coat a bit of shaping in the sides. A "sack jacket" doesn't have darts, and therefore has a boxier shape, For generations this one of the distinguishing features of American dress, the other being a "natural shoulder" with minimal padding. In my own wardrobe, there are examples of both. I'm pretty ambivalent about whether a jacket has darts, instead considering the overall shape and cut of the garment. Personally, I look for a natural shoulder, with soft suppression at the waist, and an easy but correct fit. Whether this was achieved with darts or with shaping at the side seams doesn't much matter to me. I feel the same way about pleats vs. flat front pants. I want my trousers to fit comfortably without being baggy. These days I tend to prefer forward pleats, despite the fact that are considered "incorrect" in an East Coast traditional wardrobe, again because they suit my figure and lifestyle better. The fact that they are a little different, irreverent even, is only a plus.

The clothes you wear should make you look good. The best way to achieve this is to choose cuts and styles that compliment you. These days it's easy to read the internet and fill your head with a long list of so-called inviolable rules, but following those rules by rote to the letter won't necessarily help you dress well. Know what they are, why they exist, and then adapt them to yourself, using what a friend once called a "broad stroke traditionalism". It can make the difference between looking like you're going as "Take Ivy" for Halloween and being stylish and well dressed.

Thank you for pointing out that dartless jackets can still have an easy fit and waist suppression. The side seams and pockets allow plenty of control, and the obsession with darts always seemed a bit dogmatic.

I have two suits and several more in the making that have no darts, but a healthy amount of waist suppression.

I hope that readers who aren't interested in the darts question don't skip this post because of the title. The final paragraph is a minor masterpiece. If I remember correctly, it was Zach DeLuca who made the comment about broad-stroke traditionalism. That term summed up my approach to dressing.


"Reader Ryan" here....
As usual sir, another solid entry! I'm glad you fielded my question, because I find so many bloggers too dogmatic about what details have to go with what, and why...it all becomes burdensome after a while! While I wore flats to buck trends, I'm finding, not too dissimilar from yourself, that wearing darts and pleats have become my new rebellion to conformity. That said however, I would concur that when suiting yourself, one should wear what compliments...instead of squeezing into what doesn't.

If the jacket has no sidebody and also no front dart (as was the case with the real sack-coat)then all the shaping on the front part relies on the under-arm dart (or 'fish') for shape. The addition of a front dart means shape can be added without having to cut large darts.

I don't quite understand the lack of a front dart on East-Coast style because it was informed by British tailoring. The historical American sack coat does not always look like those shapeless lounges described in Flusser. As early as 1915 you see drafts using both underarm and front darts for suppression and shape (see H.Simons drafting manuals).

The later American coats all use under-arm darts when there is no separate sidebody and some are just 'drape' cut coats, folowing the trend of the time. The American coat has not looked like a genuine sack coat for a very long time.

British tailors always called very padded shoulders 'American shoulders', since they always had more padding than many British coats. I don't know what era this dates from. All coats whether British or American had minimal padding up to at least the 1920s.

Didn't properly read the whole article, only the headline really -- but to answer your question I would say darts definitely. Although bar billiards and table football are fun too.

Why would I want to wear a jacket with two ugly scars on the chest?

Why don't you ask every tailor on Savile Row or in Naples?