No outfit in the American men's clothing tradition says 'I mean business' better than a navy suit, blue button down and tie with a red ground: 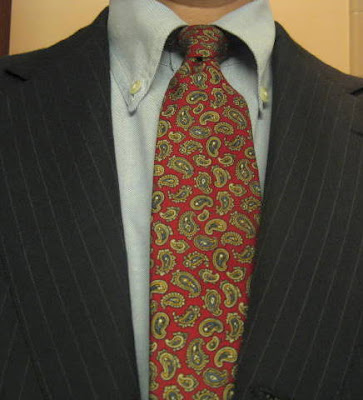 and a tan raincoat for good measure:

In today's case, 'business' meant attending a job fair in a hotel in the city...and 'job fair' meant a bunch of folding tables in a crappy conference room, which would have been great if I were planning to be a security guard or parking valet, or join the army ( the army is everywhere at these things). The whole endeavour was rather depressing.

I might have known, given that it was hosted by the Boston Herald, the more disreputable of our fine cities two major newspapers. Live and learn.

At least I had an excuse to wear my navy suit, which I kept on for the rest of the day just for the hell of it.

That's the spirit! A great combo, made better when you have to eat it and smile. There's no better suit of armour....Wear it often, wear it with pride... even if you just have to return books at the public library. You never know when opportunity strikes.

That's funny when you say "you never know when opportunity strikes." That's why I always wear a tie to school. I figure in an architecture school one is likely to run into architects every once in a while. I ftheir office should be looking for help, it doesn't hurt to be the guy who looked like he takes things seriously rather than the guy who wears shorts and flip-flops despite the 40 degree weather.

The Burberry coat came from thrift, as do almost all of my best things. The stuff is out there, I swear, you only have to find it.