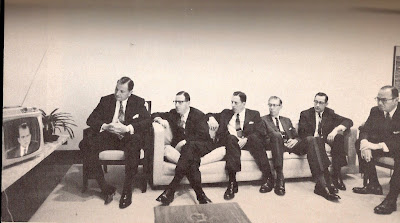 Photo New York Times, 18 June 1970
I came across this photo recently in a book called Radical Perspectives in the Arts. It's a collection of essays published in 1972 by the likes of Jean-Paul Sartre, Milan Kundera, and of all people Fidel Castro on the relationship of art to Capitalism and/or Socialism. I thought given the current state of affairs, this photo was apropo. From the caption:
"Bankers Hear President's Speech. Officials of the Chase Manhattan Bank watching Mr. Nixon on television yesterday."...On the left, next to the television screen, is David Rockefeller, Board Chairman of the Chase Manhattan Bank. Two weeks earlier-while the stock market plunged in defiance of Keynsian law- he urged the president to make this speech so as to reassure the public.

Those guys may be a bunch of no good bankers, but at least they dressed like men you could trust.

Perhaps today's version of the same photo would consist of a group of former Washington Mutual employees in fingerless gloves, huddled around a barrel fire under a bridge, with hip flasks of cheap vodka in their pockets, hurling rotten tomatoes at good old W while he hands us his latest line of sh*t.

(note: this post was supposed to be my attempt at dark political humor. Please lets not have too heated a discussion over it. Thanks)

Excellent. I love it.