Clothes are not the only thing I obsess over and feel compelled to pontificate over, so I've decided that "The Jams" may become a fairly regular feature here too.
I recently made a comment on our man Toad's blog which brought up the question of Best Movie Soundtrack record. My bid was for 'A Man and a Woman' (Un Homme et Un Femme), music by Francis Lai. Both the record and the movie are great, and I stick with my choice. 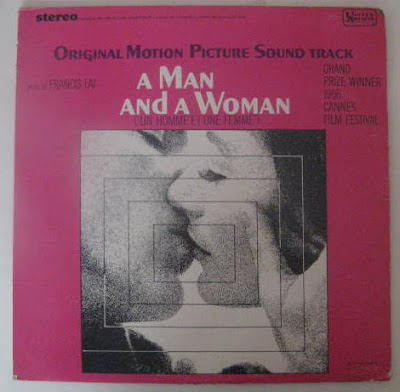 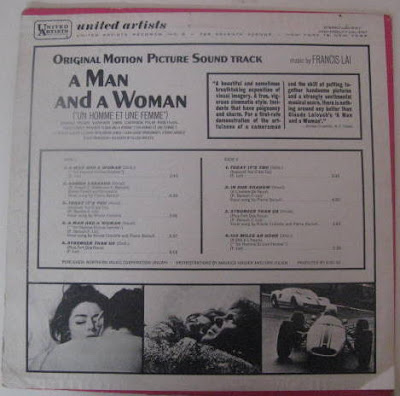 The movie is about a widow and widower, who meet and fall in love because their children go to the same boarding school. He's a race car driver, and there's lots of cool clothes, cigarette smoking and general dramatic Frenchness. The big Denouement comes when, after winning some sort of race across France (in a Ford Mustang of all cars), he receives a phone call at the black tie after party, rushes out of the place in his tux to the muddy Ford (which he apparently drove to the party from the race without stopping) and drives all the way back across France to be with her, on the beach no less,'she' being Anouk Aimee, so maybe his behaviour is justified.

The music is what sells it for me. The theme song is a little goofy, but it is certainly classic. Besides that, we have a little bit of French Samba Jazz, a melodramatic sort of spoken word broken heart song, lots of tympani and strings, and a creepy little number called 'In Our Shadow'(a l'ombre de nous), a softly sung lilting melody accompanied only by an electric organ, piano, and persistent human heart beat.

Plus, if you're looking for romance, you could do worse than this record+candlelight+leg of lamb with roast potatoes+a bottle of Gigondas. A clean house and 'the good dishes' also help.

Rent this movie if you have the chance, but definitely get the soundtrack. For those of you who have turntables and shop thrift, this record has a habit of turning up for a dollar quite a bit.

p.s. the cover artwork alone is worth a buck.

p.p.s. a goofy thing called Genderanalyzer says it is 82% likely that this blog is written by a female. Serves me right for posting about French romance films I guess.

I really enjoyed this movie.