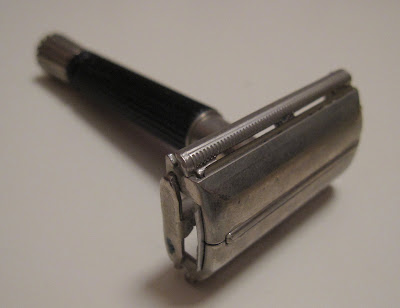 Today, by sheer chance, I happened to inherit my grandfather's Gillette Safety Razor. The old stainless steel, double edged dinosaur was called back into active service.
For as long as I can remember, I've been shaving with a 'safety razor', the invention that followed the straight razor but preceded the ghastly disposables which are so prevalent today. Sure, when I cut myself, the cuts would bleed like mad. But eventually I developed a feel for it, and I firmly believe that nothing on the market today offers a closer, cleaner shave in experienced hands.
This evening, after letting the old beard settle in for two days, I lathered up only to realize that my old razor was gone! I think it fell in the garbage and went out with the trash last week. I was immediately gripped with dismay over the prospect of going to Leavitt & Pierce to drop a pretty chunk of change on a new one. Those triple blade lubricated jobbies are for the birds if you ask me.
Then, on a whim, I ran up to the upstairs apartment, where my parents live. My dad is an incurable pack rat. We've made fun of him about it for years. But tonight his compulsive behavior came in handy. I asked him if he still had any old stuff that belonged to Nonno Peppino (my namesake, Giuseppe 'Peppino' Di Nardo). Within minutes he produced a shoebox from the attic. Inside, among other trinkets, was this little rusty box: 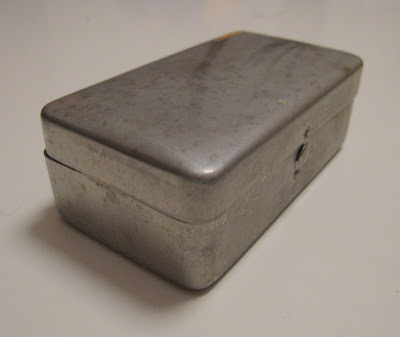 And in the little rusty box was my grandfather's razor: 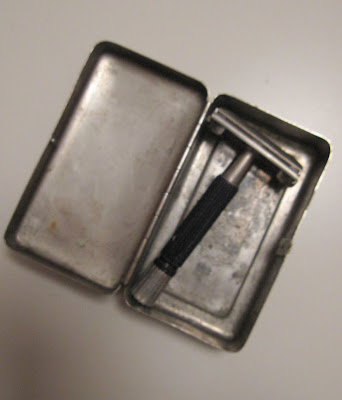 "Can I have it?" I blurted out. "Sure" said my dad. I took the thing, ran downstairs, popped in a fresh blade, lathered up and had a terrific shave. Afterwards I put the razor back in the box, and put the box back in the medicine cabinet, in the same spot where Peppino kept it for over forty years. ( We live in the apartment that belonged to my grandaprents. They bought the house in 1964. My kids are the fourth generation in my family to live here.)

The ghosts in my house just got a little bit happier.

I think I'm gonna have to give the safety razor a shot. Your house must have a ton of family history and memories in it.

What a great story about continuity and family.

I just started shaving with a DE razor about a week ago. Alas a Weishi purchased from eBay is not nearly as poignant a story, but it makes for a great shave!

Wonderful story. I can appreciate how precious these objects are, as I was given my great grandfather's old watch on my 21st birthday. It is my most treasured possession and I wear it every day.

I think the coolest thing about your story is the fact that your kid(s) are the 4th generation living there. Cool!

My grandfather had the identical razor. And it lived, for as long as I can remember, on the windowsill in the bathroom...along with that cream colored ceramic bottle of Old Spice.

Last summer I found a Gillette identical to yours at an outdoor antique market. Out of the blue I began shaving with it and soap and brush in front of the mirror again. For years I've been disposable razor in the shower shaver. The difference is noticeable and pleasurable too!

That's awesome Giuseppe. I've just recently started shaving with a straight razor and I love it.

You've reminded me that I need to ask my mom about my grandfather's shaving habits.

I still use a gillette 5 blade razor, but I have found that after switching to a badger brush and shave soap my shaves improved considerably.

Can you elaborate on what the tricks are for those of us interested in making the switch to a safety razor?

I have to admit, I'm still glancing at a certain straight razor and stroping strap every time I visit a particular store - the cost so far has kept me sane though.

I was thinking that you had to be a traditional wet shaver. That's awesome that you're using your grandfather's razor--and at his own sink, for that matter!

My grandmothers say that my grandfathers used electric for many years, and neither had any clue where their old safety (or straight) razors may have gone. My one grandfather DID have tons of pocket squares, which sadly all went to the local clothes closet not 6 months before I discovered that I, in fact, wanted to BE my grandfather, squares and all. Hopefully some lucky broke and jobless gent scores a solid job with Papa's PSs flying proudly at the breast.

Oh, and he was as Italian as they come.

Now you can pass the razor on to your boy when the time comes. I wonder if your boy likes to watch you shave? Mine 3 year old watches, with many inquiries, nearly every morning.

I like that the razor is placed next to the gauze.

Check this killer article, "How to Shave Like Your Grandpa," from The Art of Manliness, out first:

And then head over to Badger and Blade for "A Beginners Compendium on how to get a Better Shave":

Been a wetshaver for a few years now and I'll never go back! I use a DE (Merkur heavy duty). I've recently been trying the Cremo Cream (google it). It smells a bit tropical but is the BEST shave cream I've ever used (tip: I use a brush with it to get the big lather even though it brags about being brushless).

My advice for learning the art of the Double Edge: hold it like you're sipping tea with the queen. Use a light touch and a let the razor do the work. I never cut myself with mine. The cartridge razor teach the bad habit of pressing the razor into your skin.

This post made me so happy. Thanks for sharing.

Excellent! I somewhat recently started using a brush and bowl in my shaving routine. I've long been interested in using a safety razor or a straight razor. After dropping almost $20 for a pack of disposable razor heads, I've decided the next time I drop money on shaving supplies, it'll be for a decent safety razor and some blades.

On another note, I also have an uncle whose name is DiNardo who hails from New England. Is that a common name?

Have you considered trying the straight razor and strop? That's how I shave and it is lovely!

I love the blog, by the way. Started reading a few weeks ago and went on my first thrift store run last week in Cambridge. Found an Andover shop cashmere blazer and old Brooks Brothers Makers white oxford and walked out for $10. You've got me hooked!

As a college student I can't thank you enough for wising me up to finding nice stuff affordably. I abhor the way most of my classmates dress, but I can't stand paying through the nose for clothes. You are doing great work!