I'm sure many of you have at some point either visited Ikea or purchased something from them online. These days, it's hard to find someone who hasn't. Personally, I have mixed feelings about the place. In some ways, it's great. I've been pretty fond of their cheap glasssware, since I'm clumsy and have a habit of breaking wine glasses. And their general design concept isn't bad, if you have a sort of budget-modern aesthetic. But cheap is cheap, and the quality of most of their goods os really low. Which kind of stinks, because so much of what they sell is destined to be trash bound in a scant year or two. In some cases, you're lucky to get that much time out of it.

Mrs. G. and I have been together for a long time. When we met, we were both living in separate punk-o apartments with piles of roommates, using whatever funiture was culled from the trash, clearing beer cans and other parerphanalia off of the coffee table to make room to eat. Eventually, we moved in together. Our first apartments were a little, shall we say, "kooky". We were developing our own sense of interior style, but we were young rock 'n' roll types, and the houses showed it. As time went by, we began to strive for a more refined and stylish pad, but we were still broke. Enter Ikea. For us it was a godsend. Cheap and easy, and a good match to the few nicer old pieces we had picked up. Soon, our house was full of assemble-it-yourself furniture.

These days, we tend to be a lot pickier. Still a cheapskate, I only buy furniture in the thrift shops. But we've succesfully managed to replace much of the Ikea junk with authentic pieces of our preferred 1960's/early '70's era furniture. And the house has been, if I do say so myself, really coming together quite nicely. Except for the damn coffe table: 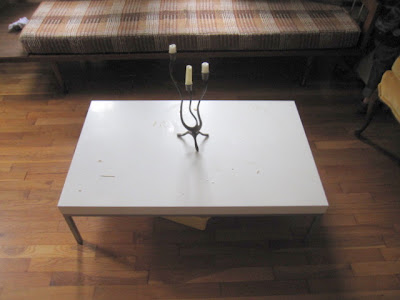 This is our old Ikea coffee table, the "Klubbo" model. When I bought it, it was $40. Not bad. A simple white rectangle, with a vaguely German modernist vibe, it was easy to sneak in next to the better pieces. 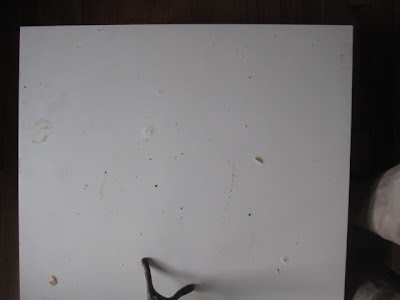 The surface just couldn't take a beating, especially not as inflicted by a small boy. The above photo shows the table top as it appeared after cleaning. Embarrassing. I'd been dying to get rid of this table for a long time, but these days I'm picky. The thrift stores had yielded nothing to fall in love with, and rather than settle for one we didn't like, we decided to wait it out.

Then just when I think I can't take it no more, I decide to pop in to a particular thrift store that I rarely visit, and there it is, my new coffee table. It's love at first site. Vintage early 1960's, long with a low profile (like our couch), and best of all, rounded corners and a durable wipe-clean surface (read: kid proof). No price tag. I inquired about the price, and was told it was part of a set, which they are unwilling to break up. Rats!....but the set is only $24.99! Sold American. 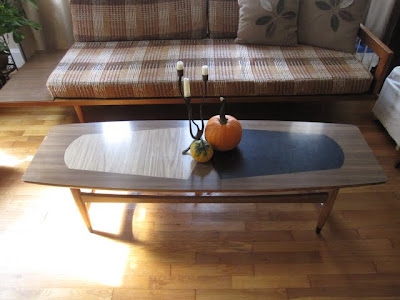 Not bad. A perfect mate to our 1958 couch/ day bed. Normally, I wouldn't be so brash as to buy a major piece of furniture without consulting Mrs. G. first, but time was of the essence here, so I took the plunge. I knew she'd love it, and I was right. Plus, we've got the matching bonus table, which I don't really even need, sitting on the enclosed back porch waiting for me to find a spot for it. Score one for the good guys!

On Monday, the boy and I watched out the window with glee as the garbage men not only removed the old piece of junk from Ikea (the source of my glee), but also snapped it loudly into shards with the trash compactor (the source of the boys glee).

That looks like the coffee table we had when I was a little kid. You'd love my parents' danish modern bedroom set. It was the first thing they bought when they got married in 1962. They still have it in their guest room. Until we went "Early American" in the mid 70's, I always called our sofa "the Dick Van Dyke couch".

You did well on your shopping adventure.

That table is AWESOME!!! Congrats on a great find.

The wife is the thrifter in the family, and over the years, she has found some pretty sweet stuff from that late 50s to early 70s period. All of it was cheap and in relatively good condition--no sense in getting dinged up stuff just 'cause it's cheap.

One semi-short story: during the first year of being married, I found myself unemployed and spending most of the days browsing the want ads. One day we were about to get in the car, when wifealicious spots a white coffee table sitting next to the dumpster. After a minute of pleading, she convinces me that we can strip the paint and refinish it. So we grab it. Of course, I'm the one who eventually has to do the refinishing (with my parents help). So we ended up with a mid-60s coffee table built by Lane, presumably in Virginia.

So what was originally a similar red to your table, and then painted multiple layers of white, has now been a medium walnut brown for 9 years now. It has a 32x52 surface area, that has suffered multiple dings from our 7 year old little drummer boy.

I can attest to the fact that a lot of Ikea's stuff is junk. I have a bedroom dresser that I purchased three years ago. The two small top drawers don't fit properly and bang into each other when I close them and the bottom of one of the larger drawers is cracked.

You may want to start going to estate sales to pick up some nice pieces. My sister and I sold the contents of my mother's home through an estate sale and a lot of the pieces went for a song. They were sold at fmv and many of the items went for far less than that if they couldn't be sold during the initial sale.

This is horrible! This is outrageous for the work of Gio Ponti!!
Ikea just stole everything to good designers and do it again with bad "ingredients" like Zara or H&M, I can't stand that!!
http://whereisthecool.blogspot.com